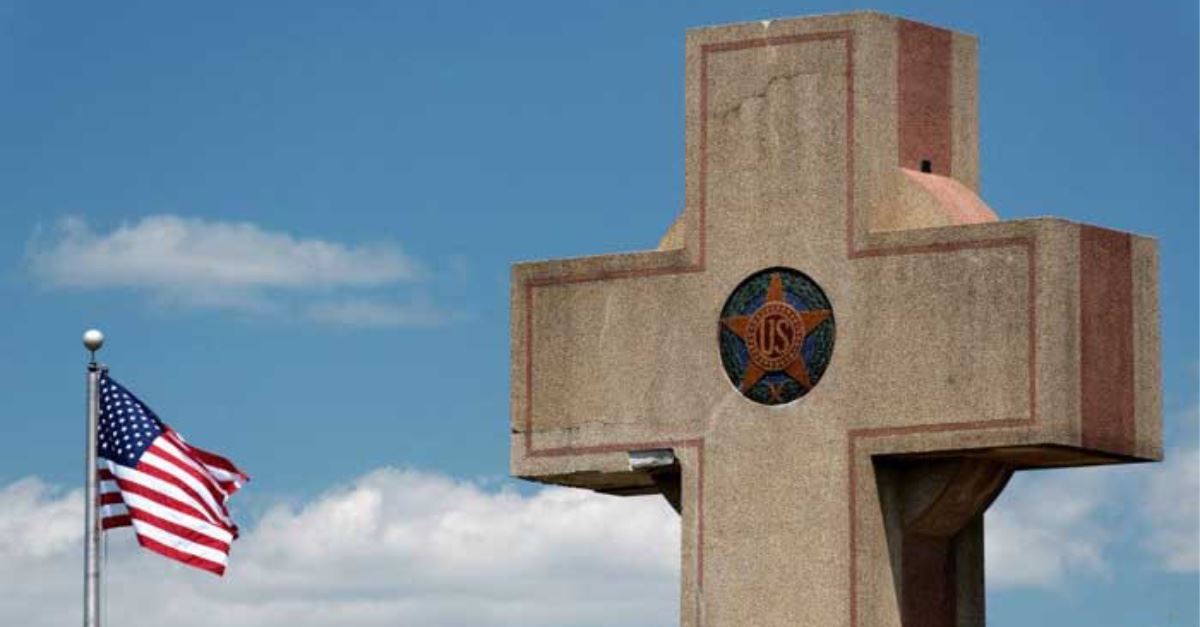 The Supreme Court ruled yesterday that a forty-foot World War I memorial cross can stay on public land.

The concrete cross is located in the middle of a busy median strip and across from a pawnshop in Bladensburg, Maryland. It was erected nearly a century ago when mothers in the community decided to build a memorial to honor their fallen sons.

When they ran out of money, the American Legion adopted the project. By the 1930s, a local parks commission had taken over the memorial and its maintenance.

The American Humanist Association challenged the placement of the cross, contending that “there is no meaning to the Latin cross, other than Christianity.” A federal appeals court agreed, declaring that its placement on public land violated the Constitution’s ban on the establishment of religion.

The American Legion countered that if the cross had to be moved, so too would other crosses that served as war memorials.

Writing for the seven-to-two majority, Justice Samuel Alito called the cross “a prominent community landmark” and stated that its removal would be seen “not as a neutral act but as the manifestation of a hostility toward religion that has no place in our Establishment Clause traditions.”

Justice Alito argued that the Maryland cross has essentially become secular. He invoked the history of World War I memorials, noting the many rows of crosses and Stars of David at cemeteries that memorialize those who died in that war. In his view, these memorials have been established as a way to honor the dead.

I am grateful that a majority of Supreme Court justices do not want to begin removing crosses from war memorials all across the country. But I am less grateful for their reasoning: these crosses have become so irreligious in symbolic import that they are no longer statements of religious conviction. As such, they do not violate the separation of church and state.

So, our culture has become so secularized that the cross—a direct reminder of our Savior’s death for mankind and an essential symbol of the Christian faith—can itself become secularized.

“The best abortion ever”?

Writing for The Cut, Sarah Miller describes her four abortions, calling her latest “the best abortion ever.” She writes graphically and in profane terms about the ending of human life as if it were simply a somewhat distressful medical procedure.

We could discuss the rising popularity of euthanasia, the decline in church membership, and any other moral/spiritual issue we face. They all have at their heart the marginalization of faith and secularizing of culture. When God is a hobby and the Bible is merely a diary of religious opinion, we are free to believe what we want and do what we want.

“They are darkened in their understanding”

Yesterday, we discussed our responsibility to share what we know with those who do not know it. Today, we’ll focus on the compassion that motivates us to be such culture-changing Christians.

Paul described the Gentile culture of his day: “They are darkened in their understanding, alienated from the life of God because of the ignorance that is in them, due to their hardness of heart. They have become callous and have given themselves up to sensuality, greedy to practice every kind of impurity” (Ephesians 4:18–19).

Could he say the same about today’s society?

Here’s my point: You and I were in precisely the same condition before our salvation in Christ.

If you became a Christian as a child or have been a believer for a long while, you probably don’t have a frame of reference for what it’s like to be a non-believer today. The lost culture has changed significantly since you came to faith. Challenges exist today that you never had to confront.

You may not remember what it was like to hope you would go to heaven when you died but have no certainty that you would. To live without the comforting, empowering presence of the Holy Spirit in your life. To make decisions without divine direction. To face crises and pain without your Father’s compassion and grace. To do life without the affirming community of fellow believers.

This is the daily experience of every person you know who does not know Jesus personally.

The only pathway to life and life eternal

Our enemy uses the lie of secularization to keep God’s people on the sidelines when we should be in the fight. Sharing our faith with our words and lives is not imposing spirituality on a secular society—it is sharing the only antidote to the disease that is killing every person on earth. It is offering the only pathway to eternal life in heaven and abundant life on earth.

Someone was compassionate enough to share this pathway with you. How will you pay your debt forward today?

NOTE: I am excited about the response we’ve had to our YouTube series, “Biblical Insight to Tough Questions.” If you haven’t checked it out yet, please do.

Our question this week is: Can we believe in miracles today?

I hope that you will view the video, as well as the others in the series, and share them with family and friends. May this content bless you today.