School Shooting in Florida: 'It’s Supposed to Be a Safe Place' 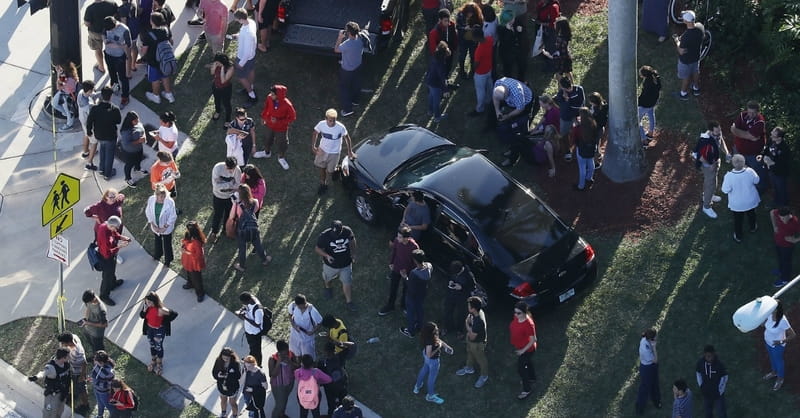 School Shooting in Florida: 'It’s Supposed to Be a Safe Place'

The image is one I’ll never forget: a woman with an Ash Wednesday cross on her forehead holding another woman as they grieve together. The picture was taken on one of the holiest days of the year for many Christians. It shows that, no matter how sincere our faith, none of us is immune from tragedy in this broken world.

Here’s what we know this morning: a shooter opened fire yesterday afternoon at Marjory Stoneman Douglas High School in Parkland, Florida, fifty miles north of Miami. At least seventeen people have died; fourteen others were wounded, five of whom suffered life-threatening injuries.

The suspected gunman, nineteen-year-old Nikolas Cruz, began shooting outside the school, then barged inside. According to Florida Sen. Bill Nelson, he “set off the fire alarm so the kids would come pouring out of the classrooms into the hall. And there the carnage began.”

Cruz was taken into custody nearly two hours after the shooting was reported. He is a former student who had been expelled from the school for disciplinary reasons.

Jay Golden, whose daughter Rachel survived, told reporters, “You put your kids in school and it’s supposed to be a safe place and this stuff happens all the time.” Sadly, he is right: yesterday’s tragedy was the eighteenth school shooting so far this year, and it’s only February.

When you heard the news from Florida, what was your first response?

If you’re old enough to remember Columbine, I’m sure you remember the unspeakable shock we all felt. When news broke yesterday of the shooting in Florida, the response was different. Reaction was somehow more muted. It seems that we have grown numb to such horrors, resigned to continued assaults on our schools and society.

Counselors refer to this as “compassion fatigue.” This condition is so common in our culture that a “Compassion Fatigue Awareness Project” has been created in response.

Such stoicism is a natural defense response to overwhelming stress. We feel we cannot keep going through the same depth of pain, so we harden ourselves to it. If we cannot prevent suffering, we normalize it so as not to feel so impotent and victimized.

There’s a morbid sense of calm in deciding that we live in a world where nothing can be done to prevent such tragedy. This choice removes from us the burden of proactive engagement. If we must resign ourselves to living in a broken world, we do.

My parents survived the Great Depression; my father fought in World War II and experienced horrific atrocities. They spoke of those years with stoic determination. “You do what you have to do,” was how they explained their lives in the face of such deprivation and pain.

This response to suffering has a positive side. When a terrorist strikes in Israel, the people move as quickly as possible to return their lives to normal. They grieve those they lose, of course, but they refuse to let their enemies disrupt their society.

Scripture has much to say about the positive values of endurance. We are taught that “suffering produces endurance, and endurance produces character, and character produces hope” (Romans 5:3-4). We are to “let steadfastness have its full effect, that you may be perfect and complete, lacking in nothing” (James 1:4).

Four steps to the compassion of Christ

However, we must not let endurance become indifference.

By the time Jesus learned that his friend Lazarus was sick, our Lord had already healed lepers, demoniacs, and “many who were sick with various diseases” (Mark 1:34). He had fed multitudes of hungry people and taught massive crowds.

We need the compassion of Christ today. We must never let a school shooting or any other tragedy harden our hearts to those in pain. The darker the room, the more urgent the light. The body of Christ has never been more relevant or more needed than today.

Let me suggest four biblical steps we can all take this morning.

One: Ask God to give you the heart of Jesus for those who grieve. “Love” is the first “fruit of the Spirit” (Galatians 5:22). Ask your Father to break your heart for what breaks his heart.

Two: Intercede for those who suffer and grieve (1 Thessalonians 5:17). Pray for them as if they were your own sisters and brothers, because they are. Ask the Spirit to help you pray and to pray through you (Romans 8:26).

Three: Ask God to help you help someone in pain today. “As each has received a gift, use it to serve one another” (1 Peter 4:10). If you live in south Florida, look for ways to volunteer, to donate blood, to give whatever is needed. If you live elsewhere, look for those in your community who need your compassion.

Four: Tell those you love that you love them, remembering that “a friend loves at all times” (Proverbs 17:17). It is tragically ironic that yesterday’s shooting took place on Valentine’s Day. Don’t let another day go by before you express your love to your family and friends. One day will be your last day. We don’t know that it will be today, but we don’t know that it won’t.

After yesterday’s shooting, Broward County Sheriff Scott Israel spoke for us all: “It’s catastrophic. There really are no words.” But when there are no words, we can turn to the living Word (John 1:1).

Will you go to him in prayer now?

Photo: People wait for loved ones as they are brought out of the Marjory Stoneman Douglas High School after a shooting at the school that reportedly killed and injured multiple people on February 14, 2018 in Parkland, Florida. Numerous law enforcement officials continue to investigate the scene.