Protester Climbed Up the Base of the Statue of Liberty 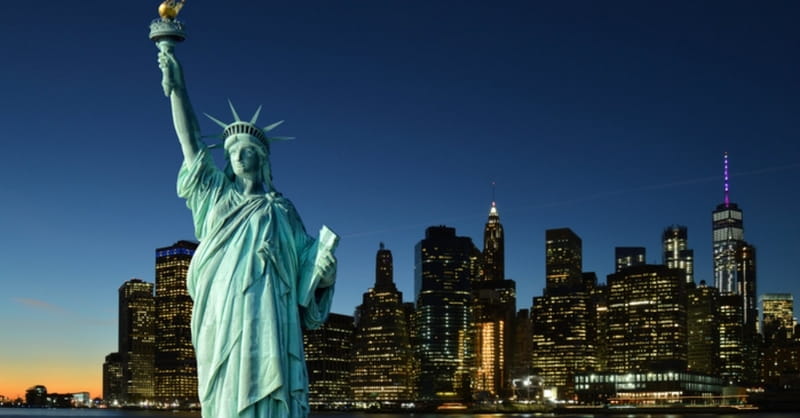 Protester Climbed Up the Base of the Statue of Liberty

A woman climbed the base of the Statue of Liberty yesterday to protest the separation of migrant families. She was taken into custody by police. Liberty Island was closed during the standoff, and around four thousand people had to be evacuated.

On the day after America’s birthday, if you’re concerned about your country, you’re not alone. Bloomberg is carrying an article titled, “Freaked-Out Americans Desperately Seek to Escape the News.” Here is some of their evidence.

Last fall, the American Psychological Association discovered that almost two-thirds of Americans listed “the state of the nation” as their primary source of stress. They ranked it above both money and work.

According to the Pew Research Center, almost 70 percent of Americans feel a sense of “news fatigue.” When Enterprise Rent-A-Car surveyed more than 1,100 Americans about their summer travel plans, the top three reasons given for travel were stress, the news, and the political climate.

Discovery Inc. owns networks HGTV, Food Network, and TLC. It has seen a 12 percent increase in time spent by viewers watching its networks since the 2016 election. The head of research for Hallmark Channel says, “When we asked people why they watched Hallmark, we used to hear things like ‘I want an escape.’ Now it’s ‘I want to be reminded that there’s still love in the world.'”

America turned 242 years old yesterday. Our democracy has been tested many times across our history.

In the decades from our founding to the Civil War, the unresolved tension at the heart of the nation had to do with federal power versus state power. The Second Continental Congress knew George Washington would become the first president and created a Constitution with strong federal and executive powers. Thomas Jefferson, by contrast, believed in a weak federal government and strong states’ rights.

The conflict between the two views of national authority laid the foundation for the War Between the States. As esteemed historian James M. McPherson notes, “The United States went to war in 1861 to preserve the Union; it emerged from the war in 1865 having created a nation. Before 1861 the two words ‘United States’ were generally used as a plural noun: ‘the United States are a republic.’ After 1865 the United States became a singular noun.”

Two world wars, the Great Depression, the Cold War, conflicts in Korea and Vietnam, and our ongoing struggle with global terrorism have all challenged our commitment to government “of the people, by the people, for the people.” And yet our democracy prevails.

What explains “the greatness of America”?

In 1835, Alexis de Tocqueville noted that “the greatness of America lies not in being more enlightened than any other nation, but rather in her ability to repair her faults.”

Despite deep fault lines dividing Democrats from Republicans, pro-life from pro-choice, biblical marriage from “marriage equality,” affluent from impoverished, and believers from atheists and “nones,” we are not witnessing the kind of uprisings that have plagued so many other countries around the world.

One foundational reason is that Americans believe we can change our government and our country. We can vote for new leaders. We can persuade others to our beliefs. We each have access to influence.

Our founding document captures the essence of our democratic ethos: “All men are created equal.” While America has often failed to keep this promise to all our citizens, the fact that we measure ourselves by it demonstrates its foundational power in our lives and nation.

“All men are created equal”

These five words lie at the heart of our democracy. They are derived ultimately from the biblical worldview, which declares that all humans–without exception–are made in God’s image (Genesis 1:26-27).

God loves “the world,” including every inhabitant of every nation (John 3:16). Jesus died for “the sins of the whole world” (1 John 2:2). God’s word invites us all to our Lord: “Let the one who is thirsty come; let the one who desires take the water of life without price” (Revelation 22:17).

To what degree did such biblical truth influence our nation’s Founders? To address this very complicated subject, I recommend an insightful essay by historian Mark Hall (PhD, University of Virginia), a specialist in the study of America’s founding principles.

Dr. Hall states: “If one is to understand the story of the United States of America, it is important to have a proper appreciation for its Christian colonial roots. By almost any measure, colonists of European descent who settled in the New World were serious Christians whose constitutions, laws, and practices reflected the influence of Christianity.”

Because of such Christian influence, “America’s Founders believed that humans were created in the imago dei–the image of God. Part of what this means is that humans are reasonable beings. This led them to conclude that we the people (as opposed to the elite) can order our public lives together through politics rather than force.”

Does this mean that the Founders intended to force Christianity on all Americans? Not at all: “Although the Founders were profoundly influenced by Christianity, they did not design a constitutional order only for fellow believers. They explicitly prohibited religious tests for federal offices, and they were committed to the proposition that all men and women should be free to worship god (or not) as their consciences dictate.”

However, Dr. Hall notes: “We ignore at our peril the Founders’ insight that democracy requires a moral people and that faith is an important, if not indispensable, support for morality.” He adds: “Such faith may well flourish best without government support, but it should not have to flourish in the face of government hostility.”

The strength of our democracy

G. K. Chesterton observed that “America is the only country ever founded on a creed.” If our creed is, “All men are created equal,” the strength of our democracy depends on the degree to which we value each other as our Creator values us.

“Let all that you do be done in love” (1 Corinthians 16:14). May this command be our prayer for America, and for ourselves, today.