My Reflections on the Singapore Summit 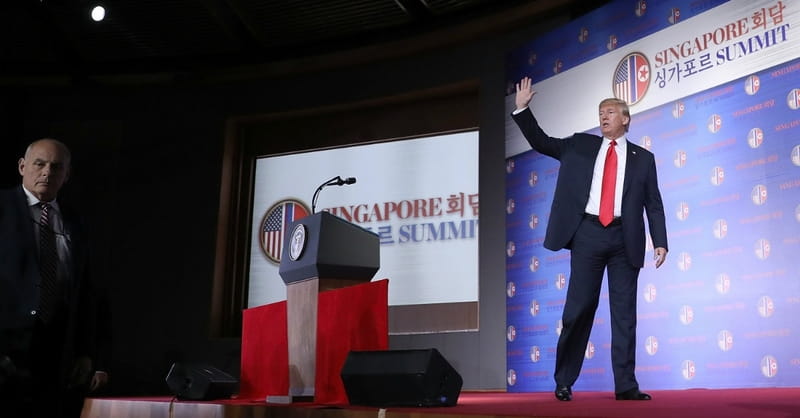 My Reflections on the Singapore Summit

“Nice to meet you, Mr. President.” With these words, Kim Jong Un shook hands with Donald Trump as the two made history in Singapore.

Before the summit, the sitting heads of the United States and the Democratic People’s Republic of Korea had never met. The summit began last night at 9 p.m. ET (9 a.m. Tuesday morning in Singapore) and lasted for four hours. The two met before a row of alternating US and North Korean flags, then sat down for a thirty-eight-minute, one-on-one meeting.

Their top advisers then joined them for another two hours of talks. The delegations concluded by sharing lunch together. Afterward, Mr. Kim announced, “The world will see a major change.”

“We’re going to have a great discussion”

Mr. Trump told reporters at the outset of the summit, “We’re going to have a great discussion. It’s my honor and we will have a terrific relationship, I have no doubt.” Mr. Kim added that “old prejudices and practices worked as obstacles in our way forward, but we overcame all of them and we are here today.”

The two signed a “joint statement” in which “President Trump committed to provide security guarantees to the DPRK, and Chairman Kim Jong Un reaffirmed his firm and unwavering commitment to complete denuclearization of the Korean Peninsula.”

The document makes four specific statements: (1) the two nations will commit to establish new relations; (2) they will “join their efforts to build a lasting and stable peace regime on the Korean Peninsula; (3) the DPRK “commits to work toward complete denuclearization of the Korean Peninsula”; and (4) the two nations commit to recovering POW/MIA remains, “including the immediate repatriation of those already identified.”

According to the agreement, the US and North Korea “commit to hold follow-up negotiations” led by Secretary of State Mike Pompeo and a high-level DPRK official “at the earliest possible date” to implement the outcomes of the summit. The two nations will cooperate “for the promotion of peace, prosperity, and the security of the Korean Peninsula and of the world.”

Mr. Trump later told reporters that he and Mr. Kim would “meet again . . . many times.” He added that he would invite Mr. Kim to visit the White House.

According to The Wall Street Journal, “Perhaps the most important outcome was to open a channel between Mr. Trump and Mr. Kim and set the stage for more high-level negotiations over thorny issues like the pace of North Korea’s denuclearization and a verification process that the declaration says are slated to begin as soon as possible.”

At a press conference following the summit, Mr. Trump called the meeting a “very important event in world history.” He said he looked forward to lifting economic sanctions once “nukes are no longer a factor” and agreed to stop US-South Korea war games.

Of course, next steps in this process are crucial. In 2005, North Korea made a similar promise to denuclearize, but those negotiations failed and the regime conducted its first nuclear test a little more than a year later.

Mr. Pompeo said Monday that the US was prepared to offer “different, unique” security assurances to Pyongyang this time, perhaps alluding to a peace treaty and other guarantees. At the press conference, Mr. Trump added, “I want to get it completed, because if we don’t get the ball over the goal line, it doesn’t mean enough.”

The president also stated that he and Mr. Kim discussed human rights at length and claimed that one hundred thousand people in North Korea gulags will benefit from their meeting. As I have written before, this is a pressing issue of special concern for Christians.

North Korea has been ranked the “most oppressive place in the world for Christians” across the last sixteen years. Up to seventy thousand believers are in concentration camps; more than 75 percent do not survive. Believers must keep their faith secret even from other family members.

However, their numbers are growing, and their faith is strong.

An invitation to intercession

In Origin Story: A Big History of Everything, historian David Christian notes, “We can never see the world directly in all its detail; that would require a brain as big as the universe.”

The good news is that we serve an omniscient Creator and King. His will for us is “good and acceptable and perfect” (Romans 12:2) and his banner over us is love (Song of Solomon 2:4). In a conflicted world filled with broken people, the only hope of true peace is the Prince of Peace (Isaiah 9:6).

The Singapore Summit is his invitation to intercession.

Let’s join together in prayer for those leading the peace process to have wisdom, patience, and fortitude. Let’s pray for the oppression of Christians to cease and for North Korean believers to worship freely. Let’s pray for Kim Jong Un and his leaders to know Christ personally and for a great spiritual movement in their country.

Such outcomes seem beyond the reach of human capacity because they are. But David Platt is right: “Nothing is impossible for the people of God who trust in the power of God to accomplish the will of God.”

Let’s remember that the Singapore Summit occurred on June 12, the thirty-first anniversary of President Reagan’s speech at the Brandenburg Gate. There he challenged Soviet leader Mikhail Gorbachev, “Tear down this wall!” Two years later, the Berlin Wall fell.

Abraham Lincoln: “It is the duty of nations as well as of men, to own their dependence upon the overruling power of God . . . and to recognize the sublime truth, announced in the Holy Scriptures and proven by all history, that those nations only are blessed whose God is the Lord.”

Photo: As White House Chief of Staff John Kelly (L) looks on, U.S. President Donald Trump waves goodbye while departing a press conference following his historic meeting with North Korean leader Kim Jong-un June 12, 2018 in Singapore.Trump described his meeting with Kim as 'better than anyone could have expected.'