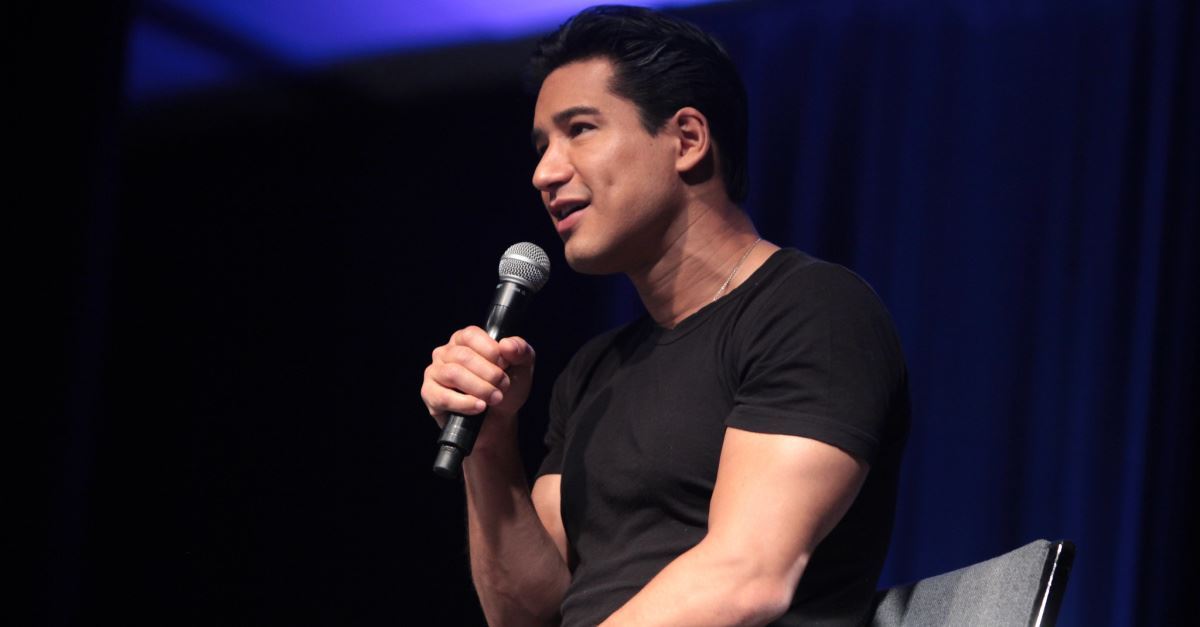 Note from Dr. Denison: While my wife and I are on vacation, our oldest son, Ryan, is writing The Daily Article. Ryan is an MDiv graduate of Truett Seminary and currently completing his PhD in Church History at B. H. Carroll Theological Institute. He has written The Daily Articlein my absence in the past and was the co-author of our latest publication, How Does God See America? I am honored to share this ministry with him.

Mario Lopez first became famous for his role as A.C. Slater on the show Saved by the Bell. He has since carved out a solid career as the co-host of Access Hollywood and is a go-to for many people on understanding Hollywood trends as a result.

However, after comments he made in June on The Candace Owens Show resurfaced, Lopez has been in the news for a very different reason.

While on the show, Owens brought up the trend among many celebrities to allow their children to pick their own gender.

Lopez responded: “Look, I’m never one to tell anyone how to parent their kids . . . But at the same time . . . if you’re three years old and you’re saying you’re feeling a certain way, or you think you’re a boy or a girl, whatever the case may be, I just think it’s dangerous as a parent to make that determination then.”

He went on to say, “I think parents need to allow their kids to be kids, but at the same time, you got to be the adult in the situation. . . . I think the formative years is when you start having those discussions and really start making these declarations.”

As one might expect, many in the LGBTQ+ community were quick to decry the Access Hollywood host’s comments.

Queer Eye co-host Karamo Brown spoke for many in that community when he remarked that he was “disappointed” by what he’d read. Brown said that, while he disagreed with those who thought Lopez should lose his job for the remarks, the host “should be given the opportunity to learn why his comments are harmful to trans youth and their parents.”

Others were less measured.

Out magazine’s executive editor Raquel Willis wrote, “Transphobic parents are the danger not children being their truest selves.”

And while Lopez has since apologized for the remarks, calling his comments “ignorant and insensitive,” he should not have been terribly surprised by the backlash.

After all, earlier in the same interview with Candace Owens, he discussed how, in Hollywood, “everyone’s afraid to offend and incredibly politically correct . . . It is interesting to see for a community that’s supposed to be all about inclusivity and diversity. They’re with you, unless it’s diversity of thought.”

When opinions are counted as attacks

I could take this opportunity to discuss again the biblical view of gender and sexuality. (See Dr. Denison’s “The transgender bathroom controversy”). But I believe that a more pressing facet of this discussion is the way the vocal members of the LGBTQ+ community spoke out so strongly against Lopez’s comments.

He said nothing in his statement condemning transgender people or that the decision to change genders is wrong. He simply said that young children should not be allowed to make that decision until they’re older.

And Lopez, though a conservative in many ways, has been a public figure in support of LGBTQ+ rights. He served as grand marshal of the Miami Beach Gay Pride parade in 2015 and was a presenter at the GLAAD Media Awards in 2011 and 2012. That history could be why the cries for his job were not universal.

But it also demonstrates the degree to which questioning that movement to any extent is likely to be treated as an attack.

Given that the Bible speaks far more definitively than Lopez regarding the fallacies inherent to much of the transgender movement, those of us who choose to believe the word of Scripture on this subject should not be surprised when we face opposition.

So how should we respond when there appears to be so little room for genuine dialogue?

Despite how vocal those in support of an absolute acceptance of the transgender movement might be, they do not speak for everyone.

In fact, I suspect that far more people found Lopez’s sentiments reasonable than did not. They simply haven’t made the headlines.

It can be easy to see these reactions and believe that there is no point in trying to discuss the subject further. But such discouragement plays directly into the enemy’s hands (and please note that the enemy in this situation is Satan, not those who have been blinded to the truth by his lies).

Throughout Scripture, we find examples of people who were tempted to give up on their culture because they let an inaccurate perception of the world around them delude them into thinking there was no hope.

Elijah’s example in 1 Kings 19 comes to mind. He stood on the precipice of throwing away all that God could do through him because he failed to believe that continuing to speak for the Lord could make a difference.

We must not make that mistake.

Yet, when we decide that it is too soon to give up on God’s ability to change the hearts and minds of those around us, we must make sure that we speak with his heart as well as his words.

The devil’s second temptation in these circumstances is to think that the only way we can be heard is to be the loudest or most audacious voice. In truth, real discussion can only take place when there is at least some measure of mutual respect between both parties.

If we want to help people understand and accept God’s perspective on this issue, then we must be sure that our disagreement is voiced in the same spirit of love and respect that Christ used when talking with the lost throughout the gospels.

Again, that does not mean accepting their views, but it does mean being willing to listen before we speak. It also means approaching the situation with a greater desire for them to find the Lord than to think that we’re correct.

As I wrote yesterday about the discovery of the Church of the Apostles, “Our faith is not new. It predates any challenges from those who would like to discount it and has stood strong against attacks from . . . popular opinion long enough for us to take comfort in the fact that it will survive whatever current generations can throw at it.”

So, take heart: the biblical stance on this issue is correct, and a time will come when the culture at large will see that.

But, until that day, don’t give up on speaking out for God on this subject.

Just make sure you don’t lose sight of who the true enemy is when you do.

We gathered interesting questions from readers like “Should I go on a short-term mission trip?” and “Does being a Christian mean sacrificing intellectual honesty?”