I Was Reminded in Israel That Religion Doesn’t Work 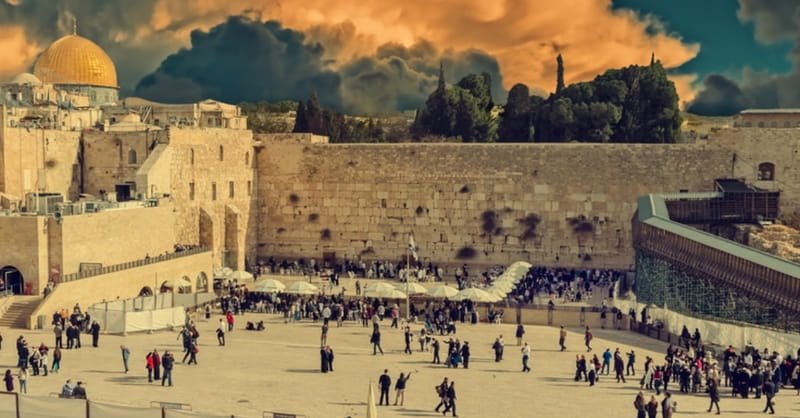 I Was Reminded in Israel That Religion Doesn’t Work

I am returning this morning from leading a study tour of the Holy Land. (Today’s article was posted yesterday before our plane left Tel Aviv.) Each time I travel to Israel, I am impressed again with the beauty, history, and spiritual significance of this singular land.

As our group took communion while looking over Jerusalem, I reminded them that this “Holy City” is venerated by the world’s great monotheistic religions and more than half of the planet’s population. Before us stood some of the most famous structures in these religions.

For Muslims, the Al-Aqsa Mosque and Dome of the Rock comprise the third-holiest site in the world. For Jews, the Western Wall of the Temple Mount is the holiest place on earth. For Christians, the Church of the Holy Sepulchre or Garden Tomb is believed to be the location of Jesus’ death and resurrection.

Throughout our stay in Israel, we were surrounded by the fervency of religion. Muslims streamed to the Temple Mount for Friday prayers. Jews crowded the Western Wall on the Sabbath. Christians gathered for Sunday worship in the Church of the Holy Sepulchre.

As I experienced what is arguably the world’s most religious city, I was reminded of the deception of religion.

An illustration from Leonardo da Vinci

To illustrate my point, I’d like you to consider what is now the world’s most expensive painting.

Leonardo da Vinci painted the Salvator Mundi (“Savior of the World”) for Louis XII of France. His depiction of Jesus was passed to King Charles I of England, then it was auctioned off. It was purchased by a British collector in 1900, but it was damaged and with unclear authorship. The collector’s descendants sold it at auction in 1958 for forty-five pounds (around sixty dollars).

Over the years, artists altered the image, turning it into a black-and-white drawing. Restoration of the painting began in 2005. After years of painstaking work, including infrared analysis, the painting was returned to its original state. Experts in Leonardo’s work were then able to authenticate it as his.

Last week, Christie’s sold it at auction for a record $450 million.

Leonardo’s image of Jesus was present on the canvas for five centuries. But lesser artists marred his masterpiece, rendering it far less expressive of our Savior. Once these obscurities were removed, the true face of Jesus was visible to the world.

Let’s consider the Salvator Mundi as a parable. Leonardo’s depiction of Jesus is available to all who wish to see him, but we must remove flawed accretions that mask and mar his image. Such efforts do not produce the artist’s rendering of Christ–they position us to receive what the artist chose to give us.

Pascal noted that there is a “God-shaped emptiness” in every person. As St. Augustine observed, our hearts are restless until they rest in him. Because we were made for personal relationship with our Maker, we each long to experience him for ourselves.

Across our history, humans have devised thousands of ways to fulfill this longing.

But no religion, not even a religion based on the teachings of Christianity, is sufficient to achieve oneness with God. As Craig Denison noted recently, “Sanctification doesn’t come about through our efforts. I can in no way sanctify myself because in and of myself I have no holiness.”

We have no holiness in ourselves, so we cannot make ourselves holy. And “without holiness no one will see the Lord” (Hebrews 12:14 NIV). As Paul noted, “if righteousness were through the law, then Christ died for no purpose” (Galatians 2:21).

Does this mean we should not engage in religious activities? Not at all.

Here’s the balance: as we seek God through Scripture, prayer, worship, and obedience, our actions position us to experience his presence. And then, as Craig notes, “Holiness is the direct result of openly and continually encountering the nature of a perfect, loving, and available God.”

So “seek the Lord while he may be found” (Isaiah 55:6), not to fulfill religious duties but to experience the God whose gracious presence meets your deepest needs (Philippians 4:19) and transforms you into the character of Christ (Romans 8:29). There is no greater privilege.

I am reading Walter Isaacson’s masterful biography of Leonardo da Vinci. Commenting on the Salvator Mundi, he makes a fascinating point. Note the glass orb in Jesus’ hand. An image viewed through such a sphere becomes inverted. And yet, Jesus’ hand and robe seen through the orb are not changed.

Could it be that Leonardo was unaware of this visual phenomenon? Isaacson doesn’t think so. He notes that the great artist was studying light and optics at the same time he painted the Salvator Mundi; his notebooks reveal an obsession with the way light reflects and refracts.

Rather, Isaacson suggests that Leonard was “subtly trying to impart a miraculous quality to Christ and his orb.” What would be upside down is right side up in Jesus’ hand.

Are you resting in his hand today?