Gloria Copeland: Jesus 'Redeemed Us from the Curse of the Flu' 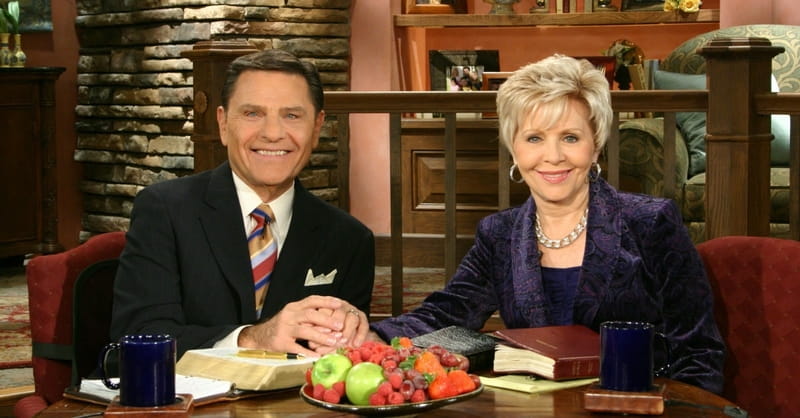 Gloria Copeland: Jesus 'Redeemed Us from the Curse of the Flu'

Kenneth and Gloria Copeland are two of the most visible televangelists in the world. They served on Donald Trump’s campaign advisory board; according to their website, they have offices in the US, Canada, Africa, Asia, Australia, Europe, Ukraine, and Latin America.

They are back in the news today because of a video Gloria posted to Facebook last week. After praying for people with the flu, she said:

“Jesus himself gave us the flu shot. He redeemed us from the curse of flu. And we receive it and we take it and we are healed by his stripes. Amen? You know the Bible says he himself bore our sicknesses and carried our diseases and by his stripes we were healed. When we were healed we are healed. So get on the word, stay on the word, and if you say, ‘Well, I don’t have any symptoms of the flu,’ well great, that’s the way it’s supposed to be. Just keep saying that: ‘I’ll never have the flu. I’ll never have the flu.’ Put words. Inoculate yourself with the word of God.”

ABC News headlined, “Trump adviser says ignore flu shots and ‘inoculate yourself with the word of God.'” Newsweek characterized her statement: “Trump’s evangelical adviser says Jesus invented the flu shot and will stop you from getting sick.”

To be fair, Gloria Copeland never stated specifically in the video that we should ignore flu shots. And she certainly didn’t claim that Jesus “invented the flu shot” in a medical sense. But she did encourage viewers to “keep saying that I’ll never have the flu,” claiming that “by [Jesus’] stripes we were healed.”

What the Bible means by what it says

I am typically reticent to criticize fellow Christians in public. Jesus taught us that “all people will know that you are my disciples, if you have love for one another” (John 13:35). The culture lambasts believers so disparagingly these days that we need to encourage and support each other when we can.

My response to Gloria Copeland’s video is therefore not intended as a personal attack or criticism. Rather, I want to focus on some theological aspects of her statement.

She cited the phrase, “by his stripes we were healed” to claim that Jesus’ death provides physical healing for the flu or other diseases. The phrase is a paraphrase of Isaiah 53:5, rendered in the English Standard Version: “But he was pierced for our transgressions; he was crushed for our iniquities; upon him was the chastisement that brought us peace, and with his wounds we are healed.”

“Transgressions” translates the Hebrew pesa, meaning “crime, rebellion.” “Iniquities” translates awon, which refers to “guilt, depravity.” In context, it is clear that Jesus’ death is related to our sins, not our physical diseases. “Healed” therefore refers to spiritual healing, the forgiveness of our sins and salvation by grace through faith (Ephesians 2:8-9).

As one commentator explains, Jesus’ wounds “are the means of healing believers’ spiritual wounds in salvation.” Another states that the text offers readers “the good news of their pardon.” Another commentator summarizes the verse: “God is gracious to us and forgives us for His sake.”

Peter used this phrase when he stated, “He himself bore our sins in his body on the tree, that we might die to sin and live to righteousness. By his wounds you have been healed. For you were straying like sheep, but have now returned to the Shepherd and Overseer of your souls” (1 Peter 2:24-25). In his mind, the phrase clearly refers to our salvation.

“By his stripes we were healed,” then, refers to the spiritual healing Jesus purchased for us at the cross. Does this fact mean that God cannot or will not heal us physically?

We should consider four principles in dealing with physical illness in the context of miraculous healing.

One: Jesus is still the Great Physician. Of our Lord’s thirty-seven recorded miracles, twenty-eight involved physical healing. He commissioned his apostles to “heal the sick, raise the dead, cleanse lepers, cast out demons” (Matthew 10:8). And Jesus is “the same yesterday and today and forever” (Hebrews 13:8). All he has ever done, he can still do.

Two: Jesus’ death for our sins is not a promise that God will always heal us physically. Paul pled with God to heal his “thorn in the flesh,” but the Lord refused (2 Corinthians 12:7-10). Each of Jesus’ apostles (excepting Judas and John) was martyred, and John died of old age. If God intends to heal us of every physical malady, would we ever die?

Three: We must not suggest that a lack of physical healing proves a lack of faith. Scripture teaches that “the prayer of faith will save one who is sick” (James 5:15), but this is a principle, not an unconditional promise. Job suffered greatly, yet he “did not sin or charge God with wrong” (Job 1:22). For those who are suffering from illness, such a suggestion adds to their pain and could drive them from the God who longs to comfort them.

Four: Miraculous healing and medical practice are companions, not competitors. Anointing oil was medicine in the first century (James 5:14). God calls doctors such as “Luke the beloved physician” (Colossians 4:14). Our Lord’s commands to serve him with our minds (Matthew 22:37) and improve his creation (Genesis 2:15) mean that he sanctions human progress in caring for our bodies as well as our world.

When our son was diagnosed with cancer five years ago, our family asked Jesus to be his Great Physician while knowing that God might not heal him medically or miraculously. We prayed in faith while consulting the best doctors.

He is cancer-free today, a fact for which we glorify God. But if his cancer returns tomorrow, we will go back to the doctors our Father used to heal him before. And we will still trust that God is love (1 John 4:8).

Why do you need a Great Physician today?

NOTE: The Denison Forum 2017 Impact Report is now available on our website. I invite you to click here to read wonderful responses from readers and to learn about ways God used your support. It is a great privilege to share this ministry with you each day.