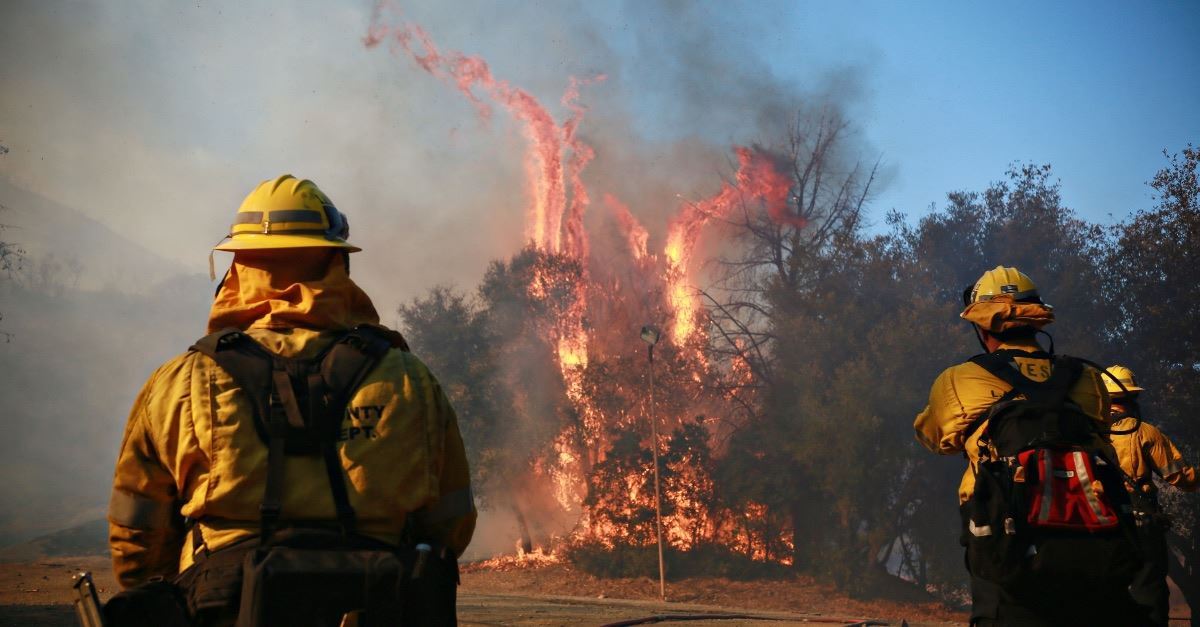 The wildfires raging through California continue to dominate headlines today. As of this writing, forty-two were confirmed dead from the Camp Fire blaze ravaging the northern part of the state, while two more have perished from the smaller yet still devastating infernos to the south. All totaled, more than three hundred thousand people have been displaced, and, with roughly one hundred still unaccounted for, officials fear the death toll will rise over the coming days and weeks.

While the worst of the damage has come in the northern part of the state, hurricane-level winds are expected to exacerbate flames in the south as gusts pour over mountain passes in that region. Moreover, even those outside the reach of the infernos have suffered as the wildfires have sent up smoke and particles that pollute the air far beyond the scope of the blaze.

Yet despite, or perhaps because of, the dangers the wildfires pose, other news from the region has also struck a chord with people around the world. Stan Lee, creator and mastermind of Marvel Comics and its litany of superhero movies, passed away in Los Angeles on Monday at the age of ninety-five.

For the better part of six decades, he captivated the minds of children and adults alike through iconic figures such as Iron Man, Spiderman, the Hulk, and Thor. He pushed boundaries with characters like the Black Panther and took people on adventures across space alongside the Guardians of the Galaxy.

Yet, the popularity of his comics and movies has as much to do with our society as his creativity. Whether it was the environment of the Vietnam War, the ever-present threat of terrorism following 9/11, the rampant cultural animosity of the last decade, or the litany of other events–like the California wildfires–that remind us that this world is a fallen place, people have often looked for a way to escape, even if only for a brief time.

But is that the correct response?

Most people are fully aware of the dragons lurking around the corners of our lives. In fact, for many, the dragons seem so universally present that the hard part is finding a small corner where they don’t exist. This sort of escapism is often our natural response when the events of this life threaten to overwhelm us. After all, when was the last time you clicked over to your favorite news site and did not have to seek out something positive within the mass of negative stories?

Now, imagine what that would be like if you lived without the promise that God had already defeated your dragons (John 16:33; Revelation 20:10). If the only hope you had in this world was that you, or some other fallen and flawed creature just like you, could come in and save the day, then perhaps you too would spend a bit more time around superheroes.

Throughout the gospels, whenever Jesus helped someone in their time of need, their immediate response was to go and tell others about what he’d done for them. Even when he instructed them to remain silent and tell no one, as with the leper in Mark 1 or the deaf and mute man in Mark 7, they couldn’t help but share their experience with the Savior to anyone who would listen.

That we are called to do the same is not a new concept for most of us. However, that we know we should tell others about Jesus but often don’t perhaps indicates that we’ve forgotten what a good story we really have to tell. I think one of the main reasons is that we’ve failed to make Christ’s story our own.

The people in Scripture who did the most for God were the ones who lived every day with an acute awareness of what he’d already done for them. Their sense of joy and gratitude to the Lord knew no end, and so their ministry didn’t either.

Have we forgotten our story?

The best superhero story ever told

Ultimately, there is nothing wrong with enjoying superheroes or escaping for a couple of hours to watch a fun movie. Not all distractions are a bad thing, and sometimes it does genuinely help to forget about our troubles for a time. But when we re-enter the real world, will we be like those living without hope, or will we model something better? Will they see in us the promise that a real Savior has come and offers the salvation for which their souls yearn?

The gospel is the best superhero story ever written, even more so because it’s true and the person he came to save is you.

That’s a story our culture could really use right now. Will you share it with them?