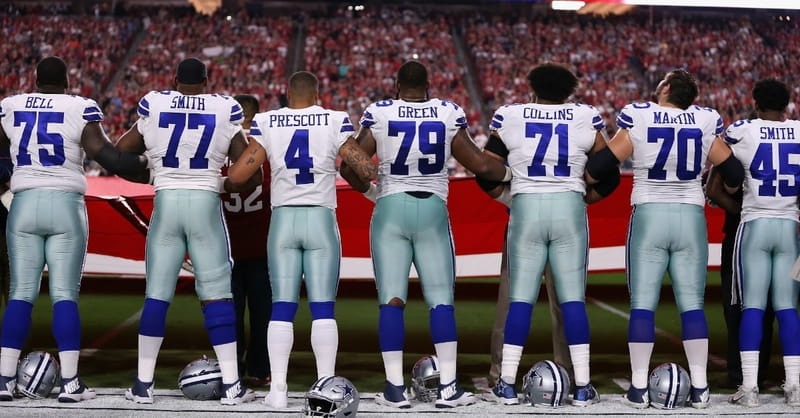 “The Star-Spangled Banner” made headlines again last night. The Dallas Cowboys knelt at midfield, then walked to the sideline and stood for the national anthem. The Arizona Cardinals stood for the anthem as well, locked arm in arm.

The controversy over the national anthem and racism isn’t going away.

In yesterday’s Daily Article, I stated that if I were a player in the NFL, I would stand during the playing of the anthem. Then I would use my personal platform to cast a light on racial injustice in our country and seek practical solutions.

I am not in the NFL, of course, but I do have this platform. So, I’ll use today’s Daily Articleto spotlight racism in our culture and identify biblical responses.

A black prisoner serving time for sexual assault is three and a half times more likely to be innocent than a white sexual assault convict. He is also likely to receive a much longer prison sentence.

In one study, African American males were twice as likely to be stopped by police in cars or on foot. Another study showed racial disparities in traffic stops during the day, when the race of the driver can be seen, but not at night.

There’s good news as well: According to the FBI, racially and ethnically motivated hate crimes fell by nearly 50 percent between 1994 and 2015. Only 4 percent of Americans approved of interracial marriage in 1959; 87 percent approve today. However, racial discrimination still exists in hiring practices, education, media bias, and movies and television.

What does God think of racism?

In heaven, we will gather with a great multitude “from every nation, from all tribes and peoples and languages” (Revelation 7:9). In Christ, “there is neither Jew nor Greek, there is neither slave nor free” (Galatians 3:28). In God’s mind, “there is no distinction between Jew and Greek; for the same Lord is Lord of all” (Romans 10:12).

That’s why we are taught, “Do not judge by appearances” (John 7:24) since “God shows no partiality” (Romans 2:11). We are warned, “If you show partiality, you are committing a sin and are convicted by the law as transgressors” (James 2:9). Scripture is blunt: “Whoever hates his brother is in the darkness and walks in the darkness” (1 John 2:11).

Racial discrimination is a sin that grieves the heart of God.

St. Augustine: “Since love grows within you, so beauty grows. For love is the beauty of the soul.” How beautiful is your soul today?

Photo: Quarterback Dak Prescott #4 of the Dallas Cowboys links arms with teammates offensive tackle Tyron Smith #77 and offensive guard Chaz Green #79 during the National Anthem before the start of the NFL game against the Arizona Cardinals at the University of Phoenix Stadium on September 25, 2017 in Glendale, Arizona.