Barbara Bush 'Ran the Family That Ran the Country' 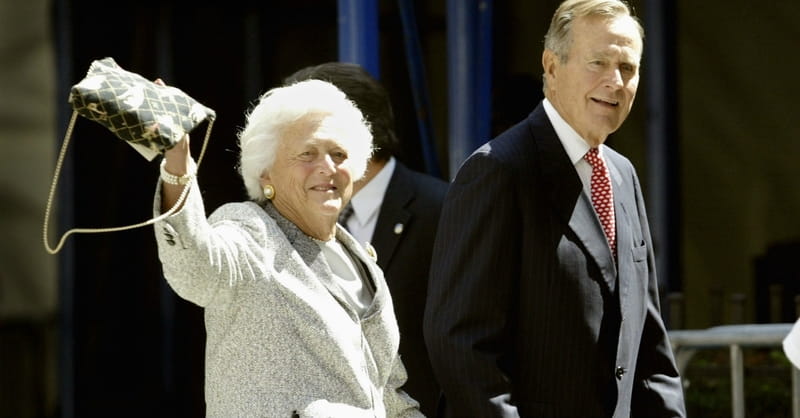 Barbara Bush 'Ran the Family That Ran the Country'

Barbara Bush died last night. Newsweek is describing her this morning as “the no-nonsense first lady who ran the family that ran the country.”

Public figures from around the world are paying tribute to this remarkable woman. President Trump and First Lady Melania Trump said they “join the nation in celebrating the life of Barbara Bush.” They noted that “she will be long remembered for her strong devotion to country and family.”

Former president Obama and his wife, Michelle, issued a statement calling her “the rock of a family dedicated to public service” and “an example of the humility and decency that reflects the very best of the American spirit.”

When her failing health was announced earlier this week, I wrote a tribute to this remarkable lady you can read here.

Mortality is a fact for us all

Mrs. Bush’s passing is not the only death making headlines this morning.

A woman from Albuquerque, New Mexico, died yesterday after being partially sucked out of a plane window when an engine exploded on a Southwest Airlines flight. The pilot was forced to make an emergency landing and is being praised for her “calm handling of the situation.”

Jennifer Riordan was one of 149 people on board. Her family confirmed her death in a statement last night: “Jennifer’s vibrancy, passion and love infused our community and reached across our country. Her impact on everything and everyone she touched can never be fully measured.”

Meanwhile, at least two people died following a crash on Highway 119 in California. One vehicle overturned on the roadway and landed on its side.

Closer to where I live, the driver of a tour bus was found dead by authorities after pulling over on the side of a highway in Lewisville, a city near Dallas. The exact cause of the driver’s death is under investigation.

I could go on, of course. According to the Centers for Disease Control and Prevention, 2,712,630 Americans die each year. Heart disease is the leading cause of death, followed by cancer, chronic respiratory diseases, and accidents, which claim 146,571 lives annually.

“You do not know what tomorrow will bring”

Mrs. Bush had the very best medical care which extended her life but did not prevent her death. Jennifer Riordan died while flying on an airplane, something I have done hundreds of times. Last year, 37,461 Americans died in motor vehicle fatalities; I will be driving in my car shortly.

Scripture is clear: “You do not know what tomorrow will bring. What is your life? For you are a mist that appears for a little time and then vanishes” (James 4:14). That’s why the psalmist prayed, “Teach us to number our days that we may get a heart of wisdom” (Psalm 90:12).

We are all fallen people: “All have sinned and fall short of the glory of God” (Romans 3:23). None of us are perfect. For example, several readers of my tribute to Mrs. Bush noted her belief that abortion is a “personal choice,” a position with which I strongly disagree.

Since we have only today to be ready for eternity, it is essential that we live this day in alignment with God’s word and will. The Holy Spirit wants to mold us into the character of Jesus (Romans 8:29), a commitment he invites us to share.

In today’s My Utmost for His Highest, Oswald Chambers notes:

“Readiness for God means that we are ready to do the tiniest little thing or the great big thing, it makes no difference. . . . When any duty presents itself we hear God’s voice as Our Lord heard His Father’s voice, and we are ready for it with all the alertness of our love for Him. Jesus Christ expects to do with us as His Father did with Him.”

“The fierce urgency of now”

Martin Luther King Jr. stated, “We are now faced with the fact, my friends, that tomorrow is today. We are confronted with the fierce urgency of now.” Brother Lawrence added, “If I were to be responsible for guiding souls, I would urge everyone to be aware of God’s constant presence, if for no other reason than His presence is a delight to our souls and spirit.”

We can view mortality as a subject to be avoided, or we can view it as an opportunity to be sanctified.

When we live each day as it comes, we can focus on the opportunity in the moment. Mother Teresa: “I believe in person to person. Every person is Christ to me, and since there is only one Jesus, that person is the one person in the world at that moment.”

All of God there is, is in this moment.

Photo: Former President George Bush and his wife Barbara walk toward the Church of Our Saviour Catholic church in September 2, 2004 in New York City. The former president and first lady were attending a prayer service with their son President George W. Bush