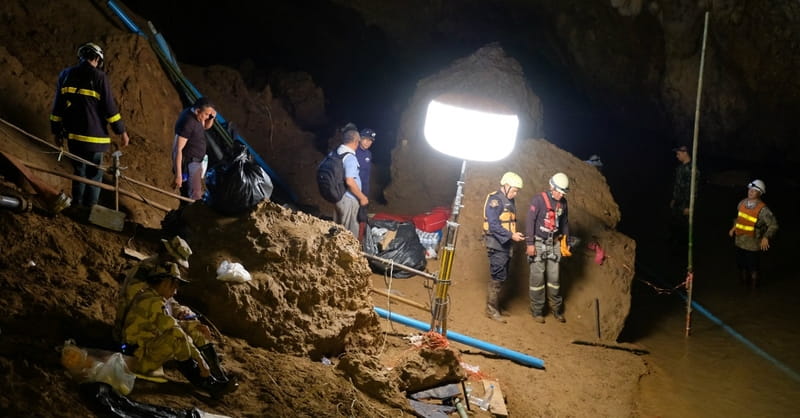 The second phase is underway in the rescue of eight boys and their coach trapped in a cave in northern Thailand. Divers resumed their work around midnight ET; Reuters is reporting that one person has already been brought from the cave this morning. The operation is expected to last several hours.

A team of ninety expert divers–forty from Thailand and fifty from other countries–has been working in the cave system. The process includes walking, wading, climbing, and diving along guide ropes already in place.

As oxygen levels in the cave continued to drop and monsoon rains threatened to flood the cave system, the first efforts to rescue the boys began over the weekend. Thirteen specialist divers and five Thai Navy SEALs descended into the watery network of underground tunnels.

They rescued four boys, each of whom wore a full-face mask attached to an air bottle. Two divers accompanied each boy, one carrying his air supply. About halfway through the ordeal, they had to navigate a section called “T-Junction.” It is so tight that divers must remove their air tanks to get through.

Christians around the world have been praying for the boys and their coach. Now we must intercede for the divers as well. Each of them is risking his life to rescue someone he did not know before the ordeal began.

Courage is the need of the hour.

Few of us will ever risk our lives to rescue someone trapped in a cave. But serving Jesus in our post-Christian culture requires courage on a level unprecedented in my lifetime.

President Trump will announce his nominee for the Supreme Court tonight. Pro-abortion advocates have been rallying to keep abortion legal in this country. To defend the unborn is to face the ridicule of those who elevate choice above life.

Meanwhile, those of us who support biblical marriage are more ostracized than ever before in our nation’s history. When we defend biblical morality with regard to gender, sexuality, euthanasia, or a host of other issues, we are increasingly marginalized and stigmatized.

But the darker the room, the more necessary the light.

Scripture consistently calls God’s people to serve him with courage. We are told to “be strong, and let your heart take courage” (Psalm 27:14). We are to “be strong in the Lord and in the strength of his might” (Ephesians 6:10).

How do we find the courage we need to obey the God we serve?

“Strength in the face of pain or grief”

The Oxford English Dictionary defines “courage” as “strength in the face of pain or grief.” By definition, we should not expect to experience courage until we face pain or grief.

Courage does not exist until it is needed. It’s not an object or substance we can put in our pocket or purse and carry around until we want it.

That’s why God cannot give you courage until you need it. But if you choose to serve him unconditionally, when your faith faces challenges that require courage, you will have all you need and more.

If we answer the call of God, we will have the courage of God.

Oswald Chambers observed that “all noble things are difficult.” It is hard to think of anything worth achieving that does not demand courage.

Relationships run the risk of rejection by the other person. A gift can be refused. A performance can be ridiculed. A test can be failed.

That’s why C. S. Lewis was right: “Courage is not simply one of the virtues, but the form of every virtue at the testing point.”

As hard as it can be to answer the call of God and trust him for the courage we need, the alternative is worse. Max Lucado: “Fear never wrote a symphony or poem, negotiated a peace treaty, or cured a disease. Fear never pulled a family out of poverty or a country out of bigotry. Fear never saved a marriage or a business. Courage did that.”

“A nation will not be moved by timid methods”

Where do you need courage today?

Luis Palau reminds us: “A nation will not be moved by timid methods.” Nor will an eternal soul.

Dietrich Bonhoeffer testified: “If Jesus returns tomorrow, then tomorrow I’ll rest from my labor. But today I have work to do. I must continue the struggle until it’s finished.”

What work do you have to do today?

Photo: Rescuers install a water pump inside Tham Luang Nang Non cave on June 28, 2018 in Chiang Rai, Thailand. Rescuers battle heavy rain in northern Thailand as they continued the search for 12 boys and their soccer coach who have been missing in Tham Luang Nang Non cave since Saturday night after monsoon rains blocked the main entrance. Teams of Navy SEAL divers worked their way through submerged passageways in the sprawling underground caverns as senior Thai government officials warned on Wednesday that time is running out and the search intensifies for the young soccer team, aged between 11 to 16, and their their 25-year-old coach, with soldiers and park rangers seeking other entry points into the cave system.