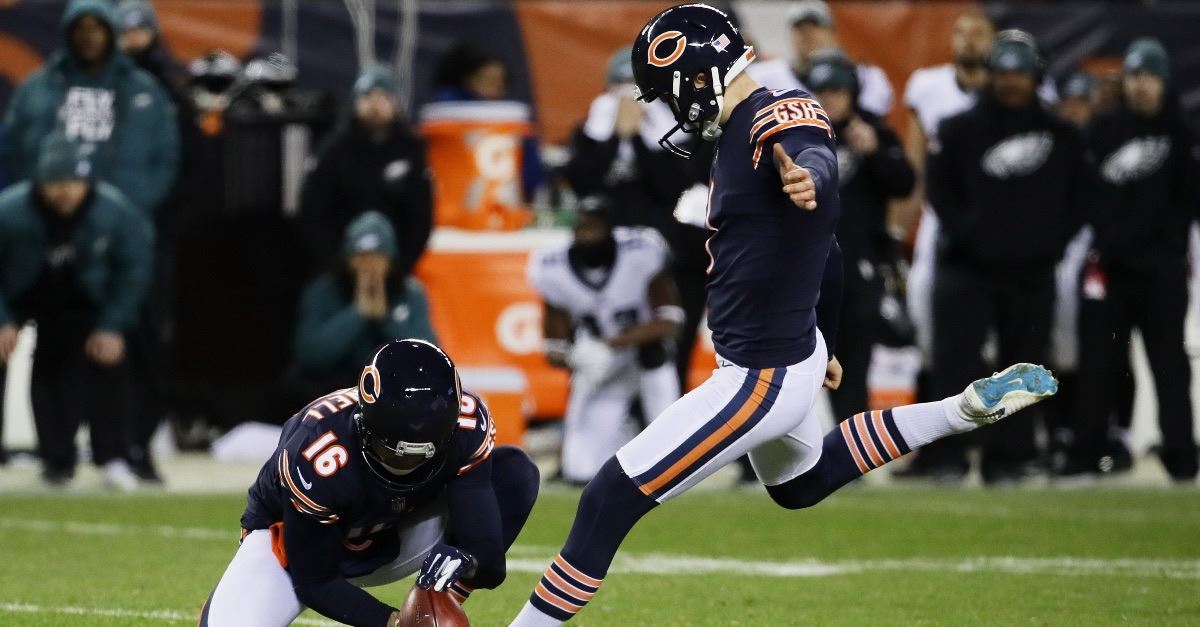 After last weekend’s divisional round, the Chiefs, Rams, Patriots, and Saints are the last four of the NFL’s thirty-two teams still in this year’s playoffs. The combined population of their cities equals 1.57 percent of the US population.

In other words, as pro football fans go, there are far more losers than winners this morning.

In our “winning isn’t everything–it’s the only thing” culture, this is tough for those of us who live in Dallas and other losing cities to wake up to. But we can learn an important life lesson from the player who epitomized losing this season.

A kick that defied all odds

Cody Parkey is a kicker for the Chicago Bears. He set an NFL rookie scoring record in 2014 and was named to the Pro Bowl in 2015. Earlier this season, he was named NFC Special Teams Player of the Week for his performance against the Vikings.

In the first round of this year’s playoffs, his Chicago Bears played last year’s Super Bowl champions, the Philadelphia Eagles. At the end of the game, the Bears were poised to win as Parkey lined up a forty-three-yard field goal. He had already kicked three field goals in the game. His fourth was right down the middle, but the Eagles had called time out just before the play began.

When the game resumed, Parkey’s kick struck the left upright of the goalpost. Then, defying all odds, it struck the crossbar. Then it fell backwards to the ground. The Bears lost.

The team and their fans were devastated. Only later did they learn that an Eagles player got a hand on the ball, deflecting the kick.

But by that time, the narrative was set: Parkey had failed.

Last week, Cody Parkey was interviewed by the Today show. The hosts asked him how he was handling the disappointment of his missed kick.

Parkey told them, “I feel worse than anybody about missing that kick because I wanted to make it more than anybody.” He admitted, “I let the fans, my teammates, and the whole organization down.”

But throughout the interview, he manifested a remarkable serenity that his circumstances could not justify. He explained its source: “Football is what I do. It’s not who I am.”

He added that he has tried “through good or bad, to give praise to the Higher Power, to the Lord and Savior, Jesus Christ.”

Savannah Guthrie said to him: “You’re the classiest of class acts. You went in there in the locker room [and] answered every question from reporters.” She added: “I think they should have MHP–Most Honorable Player. You really showed what you’re made of.”

Cody Parkey’s witness on the Today show planted seeds of God’s word and hope in souls across our country. In one interview, his temporary failure became eternally significant.

After Clemson defeated Alabama to win the college football national title last Monday, head coach Dabo Swinney told reporters, “All the credit–all the glory–goes to the good Lord.” His outspoken faith was on display yet again as he used his national platform to honor Jesus.

Of course, our skeptical culture is not surprised when we thank God for our victories. When we trust and glorify him in our failures, however, our witness is especially powerful.

One: We love God for who he is, not just for what he does for us.

When Babylon’s King Nebuchadnezzar threatened to throw Shadrach, Meshach, and Abednego into a fiery furnace if they would not worship his golden idol, they told him: “Our God whom we serve is able to deliver us from the burning fiery furnace, and he will deliver us out of your hand, O king” (Daniel 3:17).

Note what comes next: “But if not, be it known to you, O king, that we will not serve your gods or worship the golden image that you have set up” (v. 18). They would serve God, whether he did what they hoped he would do or not. Faith in adversity shows that we have not a transactional religion but a transformational relationship with our Father. We love God because he is worthy of our love, even if his will is not ours.

Two: Faith sustains us in the hard times, not just the good times.

Habakkuk testified: “Though the fig tree should not blossom, nor fruit be on the vines, the produce of the olive fail and the fields yield no food, the flock be cut off from the fold and there be no herd in the stalls, yet I will rejoice in the Lord; I will take joy in the God of my salvation” (Habakkuk 3:17-18).

The prophet described devastation in every dimension of his agrarian world. In a crisis with no food in the present and no provision for the future, he would still rejoice in his Lord. Such worship shows a skeptical culture that our faith is relevant to every challenge we face.

“The only love that won’t disappoint you”

Name your greatest problem today. It could be physical pain, financial difficulty, or personal disappointment.

Now reframe it as your greatest opportunity to influence your post-Christian culture today.

If you ask Jesus to redeem your suffering for his glory and your good, he will. This is because he loves you with a love that redeems all it touches.

Tim Keller: “The only love that won’t disappoint you is one that can’t change, that can’t be lost, that is not based on the ups and downs of life or on how well you live. It is something that not even death can take away from you. God’s love is the only thing like that.”

Cody Parkey said football is “not who I am.” Do you know who you are?