Why "Mr. Smith Goes to Washington" is Still Relevant Today 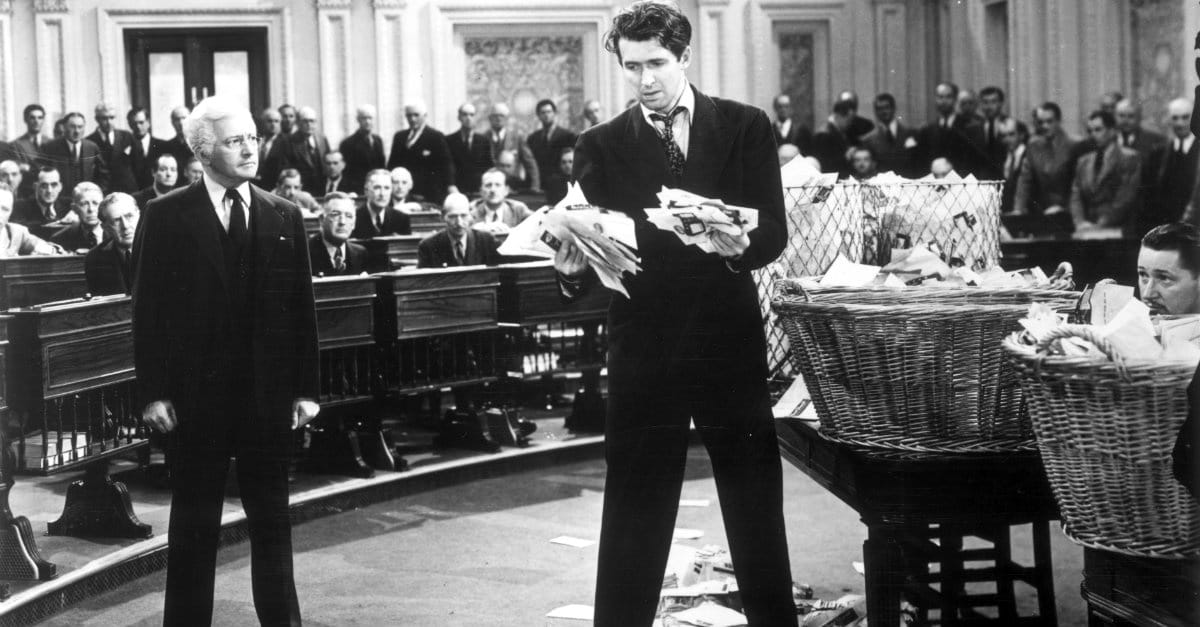 Why "Mr. Smith Goes to Washington" is Still Relevant Today

Seventy-five years ago this month, a big movie premiere took place at Constitution Hall in Washington, D.C. Nearly 300 members of Congress were there to see the first screening of Frank Capra’s new film, “Mr. Smith Goes to Washington,” starring Jimmy Stewart in the title role.
You probably have warm and fuzzy memories of this great patriotic movie. A lot of people do. We tend to remember all its inspiring, triumphant moments and how it made us feel good about our country.
But that was not the case for many of the senators and representatives who were there in the audience on that October day in 1939.
My colleague Gina Dalfonzo recently wrote about “Mr. Smith Goes to Washington” as part of BreakPoint’s Films of 1939 series at our website. She says that when it opened, “ ‘Mr. Smith’ was seen as anything but warm and sentimental. Gritty, dark, and dangerous were more like it. Members of Congress protested it, journalists warned against it, and Ambassador Joseph Kennedy, the father of JFK, tried to shut down its European release.”
You see, the thing that viewers tend to forget about “Mr. Smith Goes to Washington” is the very dark picture it painted of our government at work. Widespread bribery, kickbacks, forgeries, perjury, smear campaigns, and general corruption form the background for this tale of the young Senator Jefferson Smith’s idealism. And it all comes very close to destroying Jeff when he refuses to give in and go along with the crowd.
Sounds depressingly like the state of politics today, doesn’t it?
But that’s exactly why “Mr. Smith Goes to Washington” is such an important and timeless film. Frank Capra offers a truly realistic vision here of the political process and the temptations that come with power—and how easy it is to succumb to those temptations.
Jefferson Smith’s idol-turned-nemesis, Senator Paine, represents the politician who compromises his ethics in order to try to accomplish some vague and nebulous greater good . . . and in the process, bring profits to himself and his friends. It’s a type we know far too well. That’s precisely what makes Jeff, the hero who refuses to compromise, so appealing to generation after generation. We recognize our desperate need for public figures like this—public figures who hold fast to their ideals and don’t sell out—at the same time we realize just how rare they are.
Yes, Frank Capra and his star, Jimmy Stewart, were true patriots. As Gina writes, “Capra was able to make this film so good because he both believed in the American ideal, and understood how easily it could be co-opted and undermined by the unscrupulous and the greedy. America, he's telling us, should be celebrated because it’s the kind of country that can produce a Jefferson Smith; but at the same time, we must always be on our guard, because it’s also capable of destroying one.”
All of this helps explain why Chuck Colson included this film on his list of “50 Films Every Christian Should See,” citing its “serious and inspiring treatment of moral themes.”
If you haven’t yet watched “Mr. Smith Goes to Washington” with your family, maybe it’s time to think about doing that (especially as a new 75th Anniversary Edition of the movie will be coming out soon). No, it’s not exactly a warm and fuzzy experience—but its powerful themes constitute a message we cannot afford to forget. Even at 75 years old, it’s still a film for our time.