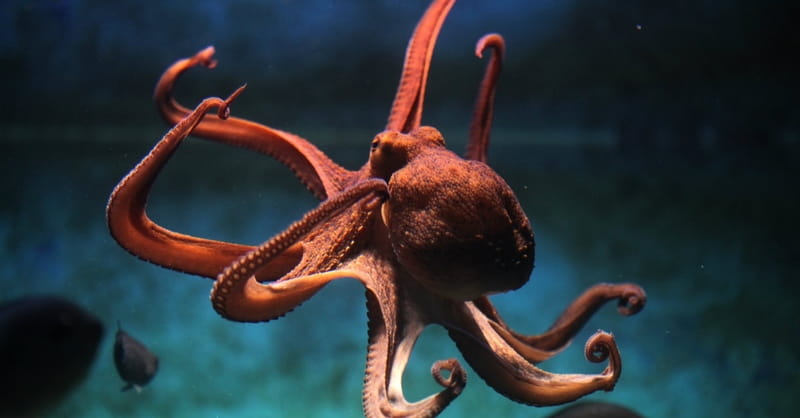 What’s the most intelligent animal on the planet? There are a lot of ways to answer that, and depending on your standard, apes, crows, dolphins, and parrots could all be contenders. But none of these vertebrates (animals with backbones) can lay claim to the incredible feats of one highly-intelligent group of invertebrates. A group that—according to new research—ignores the rules laid down by Darwin and takes evolution into its own tentacles.

I’m talking about cephalopods—the octopi, squid, and cuttlefish, which are widely regarded as scoring at the top of their class. These Mensa-worthy mollusks have been known to open jars, climb in and out of their tanks, communicate via a kind of Morse-code, and can camouflage themselves to match their surroundings with startling accuracy, using colorful skin cells.

And as I told you some time ago on BreakPoint, these eight-armed wonders of the deep defy evolution by exhibiting traits usually found in higher vertebrates like us. It’s a mind-boggling coincidence that Darwinists have long dismissed with euphemisms like, “convergent evolution.”

But octopi, squid, and cuttlefish seem to have altogether missed the memo about Darwinism, because new science is revealing another way in which they defy evolution.

In a paper published in the journal, “Cell,” Tel Aviv University researchers Joshua Rosenthal and Eli Eisenberg report that unlike almost all other animals, cephalopods routinely bypass the instructions in their DNA and edit their own genes.

In biology class, you probably learned that ribonucleic acid, or RNA, transcribes and carries the information coded in deoxyribonucleic acid, or DNA, to protein-factories in the cells. These proteins, built based on instructions from the DNA, are what make up our bodies. But what if we could edit the messages in our RNA to change the kind of protein produced? As it happens, that’s what cephalopods do—on a scale unknown anywhere else in the animal kingdom, and specifically in one area of their bodies: their nervous systems and brains.

The Tel Aviv researchers found “tens of thousands” of such RNA recoding sites in cephalopods, allowing a creature like the octopus to essentially reprogram itself, adding “new riffs to its basic genetic blueprint.” In other words, these invertebrates don’t care that they didn’t inherit the smart genes. They make themselves smart, anyway.

Of course, an animal can’t be the author of its own intelligence, and this is not a process anyone believes cephalopods perform consciously. Rather, it is a marvelous piece of “adaptive programming” built-in to their biology.

Darwinists have tried to spin this feat as “a special kind of evolution.” But the folks at Evolution News cut through this nonsense and identify RNA editing for what it is: “non-evolution.”

“Neo-Darwinism did not make cephalopods what they are,” they write. “These highly intelligent and well-adapted animals edited their own genomes, so what possible need do they have for…blind, random, unguided” evolution?

This is also an emerging field of research, which means it’s possible, in theory, that other organisms make extensive use of RNA editing, and we’re just not aware of it, yet.

If, as one popular science website puts it, other creatures can “defy” the “central dogma” of genetics, the implications for Darwin’s “tree of life,” and his entire theory, are dire.

But if cephalopods and the complex information processing that makes them so unique are in fact the result of a Programmer—of a Designer—the waters of biology become far less inky.