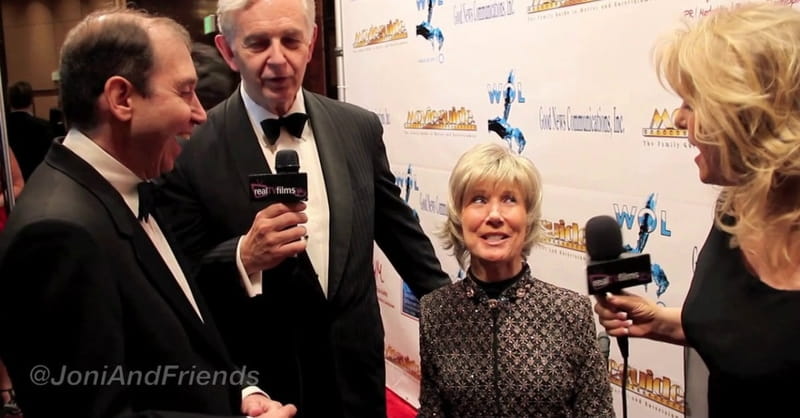 Five decades have come and gone since 17-year-old Joni Eareckson—now Tada—dove from a pier jutting into the Chesapeake Bay and snapped her spine in the unexpectedly shallow waters, emerging as a quadriplegic. But of course you probably know that this accident wasn’t the end of Joni’s story. No, it was the beginning … of a beautiful but arduous life of service that has blessed millions around the world.

As Joni says, “God permits what He hates to accomplish what He loves.”

And, oh, what He has accomplished through this one imperfect but beautiful life. Joni, of course, leads the international ministry Joni and Friends, which provides prayer, support, resources, and even camps to serve and encourage families touched by disability, takes wheelchairs to people around the world, and offers books, curriculum, and services too numerous to mention.

She’s written dozens of books herself, including “When God Weeps,” “Glorious Intruder,” and “A Place of Healing.” She’s also an incredible artist, a radio host, and even the star of a movie about her own life.

But what I truly appreciate and love about Joni is her tireless work to protect and expand the rights of people with disability everywhere. She served on the National Council on Disability when the Americans with Disabilities Act was adopted. She also served on the Disability Advisory Committee to the U.S. State Department and continues her advocacy on issues that touch on the value of life, including health care reform, adult stem cell research, and fighting euthanasia. Part of that advocacy was founding the Christian Institute on Disability to train people and churches everywhere to be advocates too.

In a recent Christianity Today interview, Joni said, in reference to the Charlie Gard case and the culture that produced it, “In an economy where healthcare dollars are very scarce, the triaging of healthcare resources will be skewed in favor of the strong and not the weak. I see this even now in some of my friends who are quadriplegic and ventilator-dependent. They’re having a harder time getting the kind of healthcare that they need.”

In 2012 the Colson Center presented Joni with the William Wilberforce Award for her life and efforts. Her friend and admirer Chuck Colson said, “She is a defiant, inspirational, joy-filled rebuttal to those who would assault the sanctity of human life.” Indeed.

Despite all she’s accomplished and learned in the school of suffering, Joni’s physical and spiritual challenges remain—and in some ways, even increased. On top of her paralysis, about 15 years ago she began experiencing chronic pain in her hips and back, which was caused by scoliosis from a weakened spine as a result of sitting in her wheelchair for so many years. The doctors told Joni that her bones were too porous for surgery. Then, in 2010, they discovered that she had stage-3 breast cancer—from which she has been pronounced cancer-free, thank God.

“Every single morning when I wake up I need Jesus so badly,” she told CBN News. “I just can’t tolerate the thought of another day as a quadriplegic with someone else giving me a bed bath and exercising my legs and toileting routines. It all just seems too overwhelming.”

And yet Joni perseveres, still crying out to the Lord for help. The suffering she experiences brings humility and a new perspective. As she told The Gospel Coalition, “It sounds incredible, but I really would rather be in this wheelchair knowing Jesus as I do than be on my feet without him.”

Joni’s unquenchable desire for God is expressed by the prophet Habakkuk, who said in the face of calamity, “Though the fig tree should not blossom, / nor fruit be on the vines, … / yet I will rejoice in the Lord; /  I will take joy in the God of my salvation.”

I praise God for you, Joni my friend, and for your tenacious, time-tested witness to Jesus.

Now, may we all go and do likewise.