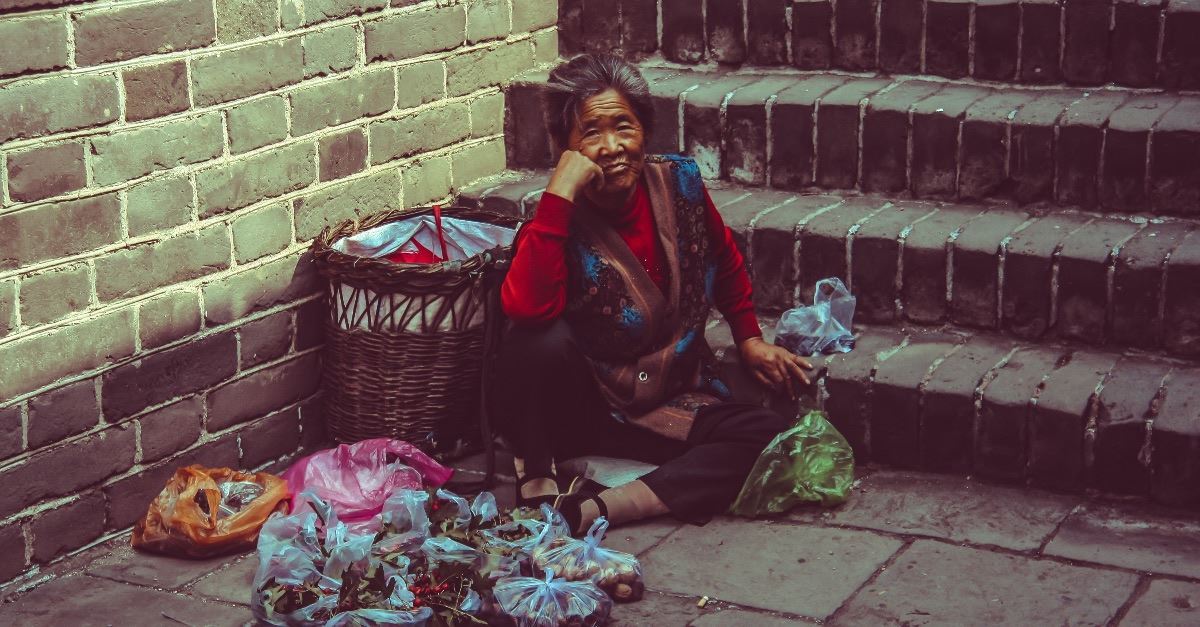 We say it all the time. Ideas have consequences, bad ideas have victims. Just look at the widows of China.

Seven years ago, Mrs. Wu’s husband threw himself into a dam. He’d recently been diagnosed with liver cancer and could not afford to have it treated.

He left behind a wife and two small children—and their story is an example of the terrible, continuing fallout of China’s One Child Policy, begun 38 years ago.

Mrs. Wu began a pattern of overworking on the family farm. She knew she would likely never remarry: China’s One Child Policy meant that she would not be allowed to have children with a second husband, so who would want her?

In time, Mrs. Wu’s overwork led to health problems. Four years ago, she suffered a stroke and is now confined to a wheelchair. Like millions of other Chinese widows, Mrs. Wu contemplated suicide.

Stories like these caught the attention of my friend Reggie Littlejohn, founder of Women’s Rights Without Frontiers. Reggie has already done a great deal to expose forced abortion in China and to save the lives of baby girls, who are aborted in huge numbers because their families prefer sons. And now she is turning her attention to China’s impoverished widows.

As Reggie explains, “My heart broke when I learned of the incredibly hard lives of the elderly widows in China’s remote villages. They have nothing, and no one gives them anything.”

Sadly, their children are not helping them—sometimes because they are disabled themselves. These desperate widows exist on rice and vegetables, and often not enough of them.

How does the One Child Policy fit into this?

As Reggie put it, the policy “destroyed traditional Chinese family structure.” Thirty-eight years ago, when the policy went into effect, China was largely rural. Farmers had large families so they would have help they needed to work the land. Those children, in turn, had many children, which meant that when their grandparents needed to be taken care of, the responsibility was “spread among many children and grandchildren, so that no one felt burdened.”

Today, thanks to the One Child Policy, one young couple in China can be faced with supporting four parents and eight grandparents—plus their own children. It’s not surprising that this can become an intolerable burden. And then when children move to the cities, elderly parents are often left alone. In a country where the elderly were once revered, all too often, they are now left to fend for themselves.

No wonder suicide among the elderly is skyrocketing in China—according to one report, in the last twenty years it has increased by 500 percent.

And this is where Reggie Littlejohn stepped in. Women’s Rights Without Frontiers has just launched a Save a Widow Campaign. They send field workers to the homes of Chinese widows to assess their needs. They’re given a monthly stipend so they will have enough to eat—along with hope, and the happy realization that they have not been abandoned.

In the case of Mrs. Wu, Reggie says, she “cannot believe that kind people from overseas are willing to help her … without asking her to do anything.” She wonders, “What kind of God do these people believe in? She wants to know this God, too.”

The Save a Widow Campaign is echoing the approach taken by the early church. The book of Acts describes how the church assigned people to take care of widows who did not have enough to eat, distributing food to them every day.

I hope you’ll consider taking part in the Save a Widow Campaign. We’ll link you to it at BreakPoint.org.

It goes without saying that we should make sure the widows in our own families are taken care of—and know they are loved. But we honor God when we extend this concern to other needy widows, both in and out of the church.