Bring Your Bible (Back) to School: Kids Have Good News to Share 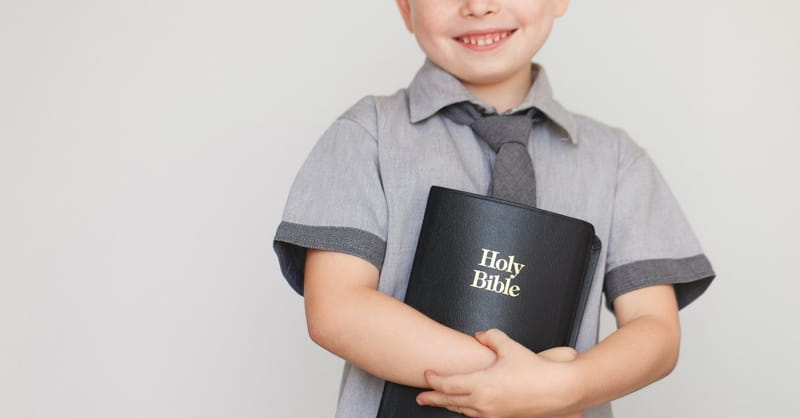 Bring Your Bible (Back) to School: Kids Have Good News to Share

Not all that long ago, Teddy Roosevelt could say without fear of contradiction, “A thorough understanding of the Bible is better than a college education.” In more recent times, Ronald Reagan said, “Of the many influences that have shaped the United States into a distinctive nation and people, none may be said to be more fundamental and enduring than the Bible.”

Now aside from the Christian worldview it teaches and the moral lifestyle it commends, the Bible also tells us how to know and love God and how to love and serve our fellow man. No wonder it was at one time required reading in practically every school in America.

But today, this Book, which laid the foundation for modern science, political freedom, and Western culture, is seen as unacceptable in American education. Yes, politicians in both parties often selectively quote the Bible when it serves their purposes, and educational progressives will, reluctantly, allow the Old and New Testaments to be studied as an academic subject in our public schools.

But since 1963, if there’s even a hint of moral teaching or proselytizing, well, forget it. And yet we wonder aloud where the increasing levels of suicide, sex, and drug abuse in our young people have come from.

That’s why I’m thrilled to tell you about a growing movement to re-introduce the Bible in our public schools—not by teachers or administrators, but by the kids themselves. It’s called Bring Your Bible to School Day, and this year’s event is tomorrow, Thursday, October 5th.

With a tagline of “Bring It. Share It. Live It,” Bring Your Bible to School Day began in 2014 and is sponsored by our friends at Focus on the Family. Last year more than 350,000 young people participated. This year, they expect half a million public school students in all 50 states to bring their Bibles to school and tell their friends about the hope they have. And the best part is, it’s perfectly constitutional.

“Over the years,” says Focus President Jim Daly, “we’ve heard from many kids and teens who want to meaningfully engage in conversations with peers to share their perspective on important issues. The good news is—they can.

Daly adds, “The Constitution recognizes students’ rights to share their biblical viewpoints in a way that doesn’t disturb instruction time, and to exercise their faith at school. ‘Bring Your Bible to School Day’ celebrates these rights and gives Christian students a chance to share a bit about their faith, which is an important part of who they are.”

Indeed. To see what it’s all about, just go to bringyourbible.org for all the details. You’ll see testimonies there of students boldly standing up for Jesus at their schools. There are sections for parents, for pastors, and for teachers, plus vital information on what’s legally permissible. And an awful lot is permissible! As the Supreme Court has noted, “It can hardly be argued that students or teachers shed their constitutional rights to freedom of speech at the schoolhouse gate.”

Look, let’s be honest: a big part of the reason there’s so little Christian influence in our public schools is that, as our friends at Gateways to Better Education have argued for years, people on both sides of the argument simply don’t understand what’s legal and constitutional and what is not. But an even bigger part is because too many of us have become afraid or passive in the face of our culture’s growing unbelief. As Chuck Colson used to say, Christians need to courageously break the spiral of silence. Bring Your Bible to School Day—again, it’s tomorrow—is a great way do just that, winsomely, and completely legally.

For you and your children to learn more about how they can take important early steps in standing up for Jesus with their friends, visit bringyourbible.org. It has all the resources you’ll need to be a part of this superb movement.