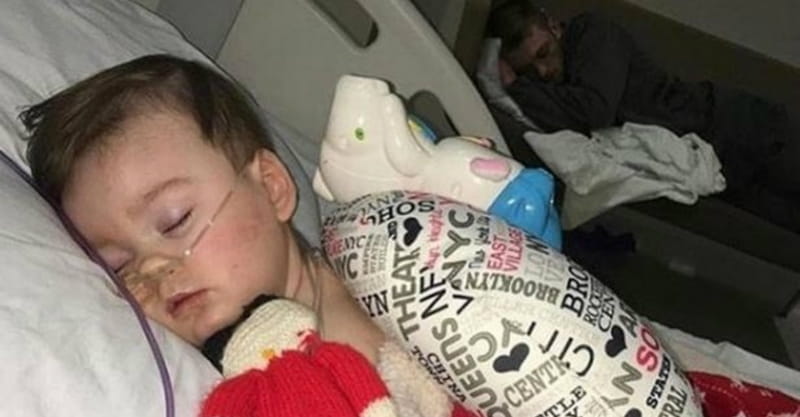 The recent blockbuster film “Darkest Hour” portrayed Winston Churchill’s gallant effort to save Britain from the Nazi war machine, as well as the evil ideology that fueled it—an ideology that destroyed human beings deemed inferior and unworthy of life.

Many forget that Hitler’s first target for extermination were individuals with disability. Sadly, even as the heroic British generation that kept the Nazis at bay ages and passes away, the British government today, through its healthcare system, is embracing the killing of innocents in a way that would make Hitler and his henchman proud.

Last summer, we told you about Charlie Gard, a British child with a rare genetic disorder. A London hospital decided, with the backing of the British government, that his case was hopeless, and despite his parents’ wishes, that he should be left to die.

Charlie did die after the hospital withdrew mechanical ventilation.

And today, Alfie Evans is a 23-month-old toddler with a “mystery illness” that has left him in “a semi-vegetative state.” Some suspect that Alfie suffers from the same neurological disorder that afflicted Charlie Gard. Now, while that’s speculation, Alfie definitely has something else in common with Charlie: Doctors and the hospital have given up on him as well, and they’re in an indecent hurry to see him die.

And believe me, “indecent” is putting it charitably, especially when you consider that, like Charlie, Alfie’s parents wish to assume full financial and legal responsibly for Alfie’s treatment. In fact, the entire nation of Italy has, once again, lined up to help, even granting Alfie citizenship after a British court upheld the hospital’s decision to withdraw life support.

In fact, there’s “a specially-equipped plane from the Italian defense ministry . . . on standby to fly to Britain to pick up [Alfie] if he is released.” The Vatican’s pediatric hospital Bambino Gesu—“Baby Jesus” in Italian—has offered to treat Alfie at no charge. Since it’s fair to say that the Catholic Church knows a thing or two about medical care, and since allowing Alfie to get on the Italian government plane won’t cost the British treasury a single pence, this isn’t a difficult decision: Let Alfie Go!

But like Pharaoh, the more heartless and absurd Britain looks by its insistence to end Alfie’s life, the more obstinate British officials get.

Why? Oh, you know… all that stuff we’ve heard before by those who legalize killing in various forms: they’re “acting in Alfie’s best interests.” They don’t want to “prolong his suffering.” They’re not being callous, they’re being “compassionate.”

Their compassion is killing Alfie—who still clings to life as I record this commentary.

This nonsense brings to mind something that Flannery O’Connor wrote: “When tenderness is detached from the source of tenderness,” that is, Christ, “its logical outcome is terror. It ends in forced-labor camps and in the fumes of the gas chamber.”

As Rod Dreher rightly pointed out, this isn’t the stuff of a post-Christian nation; it’s the stuff of a “post-humane” nation. And that’s always the order this goes. A nation that rejects God untethers itself and its institutions from the only stable, solid, and trustworthy grounding for human dignity. So, we’ll continue to see in the post-Christian west post-humane things in all kinds of ways.

Ideas have consequences, and bad ideas have victims: Charlie and Alfie won’t be the only ones.

Please pray with me that Britain changes its mind before it’s too late for Alfie and his family, and that God would use His church to dispel the darkness descending on the Sceptered Isle.