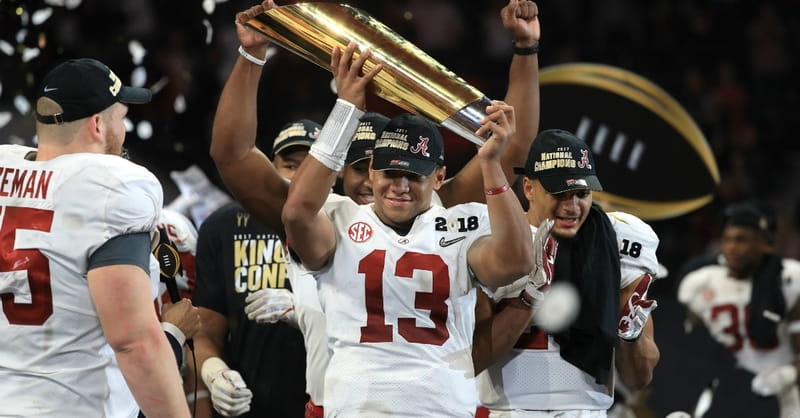 Alabama’s stunning come-from-behind NCAA championship victory over Georgia was fueled by freshman quarterback Tua Tagovailoa. In a remarkably humble interview after the game, especially given what he’d just accomplished on national television, he said: “I would like to thank my Lord and Savior Jesus Christ. With him all things are possible.”

Now two years ago, on BreakPoint, I talked about Tagovailoa’s faith—back when he was still in high school. Here’s a part of that broadcast from 2015:

Sports Illustrated recently told the story of Tua Tagovailoa, who is considered to be the best high school football player in Hawaii. The junior quarterback at Honolulu’s Saint Louis High School is drawing comparisons to the school’s most famous alum, Heisman Trophy winner Marcus Mariota.

On the surface the comparison is understandable. Besides playing for the same high school, both quarterbacks share a similar style that makes them a threat on the ground and in the air. And like so many great players in Hawaii, they share a Samoan heritage.

And it’s this last bit that’s the most intriguing and inspiring part of the story, at least for Christians.

At the heart of the Sports Illustrated story about Tua is his relationship with his late grandfather. It’s a story about a Christian from one generation passing a spiritual legacy to the next generation. The article is filled with Bible verses. It tells readers that the entire Tagovailoa clan gathers “every evening for prayer and teaching,” and to sing a Samoan hymn that “asks God to be present in everything they do.”

This is something that Tua has in common with his hero, Marcus Mariota. Mariota, as we’ve said before on BreakPoint, is also a Christian whose goal is “to go out and show the world that Christ lives.”

Football fans have long noted the disproportionate number of Samoan players in the NFL and in big-time college football. By one estimate, “a Samoan male is 56 times more likely to play in the NFL than an American non-Samoan.” Football greats like the late Junior Seau and Troy Polamalu are only two members of this illustrious line.

Less known, and even more important, is the role that Christianity has played in the lives of so many of these players and in Samoan society as a whole. Stories like that of Tagovailoa, Mariota, Polamalu, and former Raiders quarterback Marques Tuiasosopo are a testimony to the extraordinary success that 19th and 20th century missionaries had in converting the Samoan people to Christianity.

When the first missionaries from the London Missionary Society arrived in 1830, they found that there were already some Christians on Samoa. In keeping with Polynesian culture, it arrived via longboat, probably from places like Tonga and Tahiti, where Wesleyan missionaries had already been at work.

Western missionaries then built on the Samoans’ attraction to Christianity. By 1855 the entire Bible had been translated into Samoan. And before long, native Samoan religion had been replaced by Christianity.

Today, virtually every Samoan self-identifies as a Christian of some sort. More than 60 percent describe themselves as “very religious.” Prominent Samoans frequently refer to Samoa as a “Christian nation.” The preamble to Samoa’s constitution describes Samoa as “an independent State based on Christian principles and Samoan custom and traditions.”

What’s more, 91 percent of all Samoans agree with the statement that Samoa is “one of the most religious nations on Earth.”  Thus, Christianity’s influence on Samoan life and culture is hard to dispute. This legacy and heritage are on display in stories like that of Tagovailoa’s. The missionaries who brought Christianity to the Polynesian world wound up transforming an entire society.

Now, I’ve got no idea whether Tua Tagovailoa is the next Marcus Mariota on the field. But what matters is that he seems to be following an even more important Samoan tradition off of it. And that is worth celebrating.

Photo: Tua Tagovailoa #13 of the Alabama Crimson Tide holds the trophy while celebrating with his team after defeating the Georgia Bulldogs in overtime to win the CFP National Championship presented by AT&T at Mercedes-Benz Stadium on January 8, 2018 in Atlanta, Georgia.