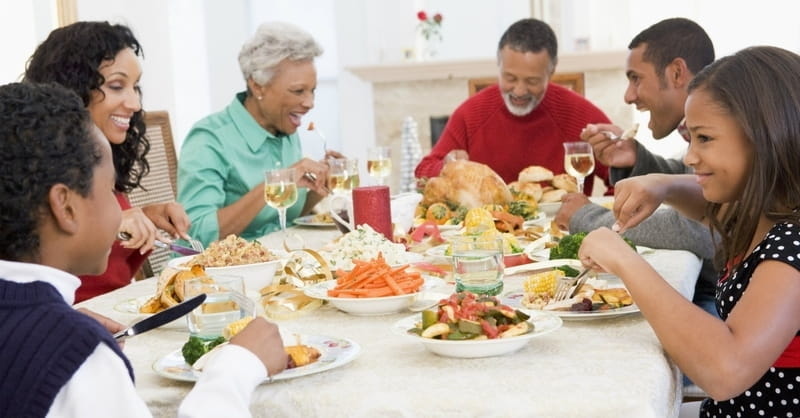 In the wake of this year’s outrageously contentious election season, Google trends recorded a spike in searches for “Friendsgiving.”

Instead of having to talk politics or religion with that opinionated parent, aunt or uncle over Thanksgiving dinner, many folks are rejecting family for friends on turkey day. Why risk having an argument ruin Thanksgiving anyway?

Of course, there’s nothing wrong with having friends over to celebrate Thanksgiving. But we ought not run from tough conversations about things that matter—at Thanksgiving or any time of year.

Tough conversations don’t have to be a disaster, even if they do touch on controversial topics. You know, topics like, oh, I don’t know, same-sex “marriage,” immigration, the ongoing validity of the electoral college, or even worse, the Dallas Cowboys.

As I’ve said before on BreakPoint, the key to civil, interesting, and productive conversations is asking good questions. By asking questions and engaging in answers, monologues become dialogues, surface-level discussions can go deeper, and closed minds might even open a little bit.

First, What do you mean by that? The battle of ideas is always the battle over the definition of words. So it’s vital in any conversation to clarify the terms that are being used. For example, a very important thing to clarify about whether Christians should support same-sex marriage is the definition of marriage—and the nature of marriage. So when the topic comes up, say, “Hold on, before we go too far into what kind of unions should be considered marriage, what do you mean by marriage?” Often, when it comes to these crucial issues, we’re using the same vocabulary as those with whom we disagree, but not the same dictionary.

Here’s a second question: How do you know that’s true? Too often, assertions are mistaken for arguments. There’s a vast difference between the two. An assertion is a definitive statement made about the nature of reality. An argument is presented to back up an assertion. By asking that question “how do you know that’s true?” you’ll move the conversation beyond two people merely asserting what they believe to why those assertions should be taken seriously in the first place.

Of course, if you ask someone making an assertion this question, be ready to be asked that question when you make an assertion. But that’s okay—we have reasons for our faith that we can share. Our moral convictions make sense, and we should be ready to make the case for them whenever we get the chance.

Here’s a third question: Where did you get this information? Once arguments are offered, it’s important to ensure the arguments are valid. For example, news reports love to shout that same-sex parents are better parents than straight couples—a talking point that’s based on very limited studies, while other studies suggest the exact opposite.

The final two questions: What if you’re wrong? and What if you’re right? Ideas have consequences. Follow your guests’ positions to their logical conclusion.

Oh, and tomorrow at the dinner table, to get off to a good start, here’s a seventh question, one of the most important that we can ask: For what are we thankful?

I can tell you right now that all of us at the Colson Center are thankful for the privilege we have to offer BreakPoint every day. And we’re thankful for the radio stations that make it possible. And of course, for all of you who listen, who support us, who pray for us, who write us, and who share BreakPoint with friends and families.

So from all of us at the Colson Center, Happy Thanksgiving.