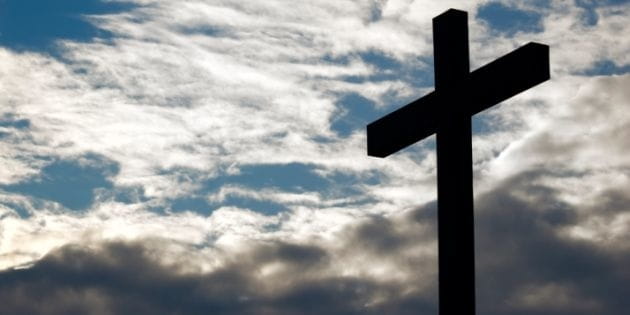 Every thoughtful person must deal with the problem of evil. Evil acts and tragic events come to us all in this vale of tears known as human life. The problem of evil and suffering is undoubtedly the greatest theological challenge we face.

Most persons face this issue only in a time of crisis. A senseless accident, a wasting disease, or an awful crime demands some explanation. Recently, evil showed its face again as a giant tornado brought death and destruction to Moore, Oklahoma.

For the atheist, this is no great problem. Life is a cosmic accident, morality is an arbitrary game by which we order our lives, and meaning is non-existent. As Oxford University’s Professor Richard Dawkins explains, human life is nothing more than a way for selfish genes to multiply and reproduce. There is no meaning or dignity to humanity.

For the Christian Scientist, the material world and the experience of suffering and death are illusory. In other religions suffering is part of a great circle of life or recurring incarnations of spirit.

Some Christians simply explain suffering as the consequence of sins, known or unknown. Some suffering can be directly traced to sin. What we sow, so shall we reap, and multiple millions of persons can testify to this reality. Some persons suffer innocently by the sinful acts of others.

But Jesus rejected this as a blanket explanation for suffering, instructing His disciples in John 9 and Luke 13 that they could not always trace suffering back to sin. We should note that the problem of evil and suffering, the theological issue of theodicy, is customarily divided into evil of two kinds, moral and natural. Both are included in these passages. In Luke 13, the murder of the Galileans is clearly moral evil, a premeditated crime – just like the terrorist acts in New York and Washington. In John 9, a man is blind from birth, and Jesus tells the Twelve that this blindness cannot be traced back to this man’s sin, or that of his parents.

Natural evil comes without a moral agent. A tower falls, an earthquake shakes, a tornado destroys, a hurricane ravages, a spider bites, a disease debilitates and kills. The world is filled with wonders mixed with dangers. Gravity can save you or gravity can kill you. When a tower falls, it kills.

People all over the world are demanding an answer to the question of evil. It comes only to those who claim that God is mighty and that God is good. How could a good God allow these things to happen? How can a God of love allow killers to kill, terrorists to terrorize, and the wicked to escape without a trace?

No superficial answer will do. Our quandary is well known, and the atheists think they have our number. As a character in Archibald MacLeish’s play, J.B. asserts, “If God is God He is not good, if God is good He is not God; take the even, take the odd ...” As he sees it, God can be good, or He can be powerful, but He cannot be both.

We will either take our stand with God’s self-revelation in the Bible, or we are left to invent a deity of our own imagination. The Bible quickly excludes two false understandings.

First, the Bible reveals that God is omnipotent and omniscient. These are unconditional and categorical attributes. The sovereignty of God is the bedrock affirmation of biblical theism. The Creator rules over all creation. Not even a sparrow falls without His knowledge. He knows the number of hairs upon our heads. God rules and reigns over all nations and principalities. Not one atom or molecule of the universe is outside His active rule.

The sovereignty of God was affirmed by King Nebuchadnezzar, who confessed that God “does according to His will in the host of heaven and among the inhabitants of the earth; and no one can ward off His hand or say to Him, ‘What have You done?’” (Daniel 4:36). Process theologians have attempted to cut God’s power down to size, rendering the Creator as one power among others. The evangelical revisionists pushing open theism have attempted to cut God’s omniscience down to size, rendering Him as one mind among others.

Rabbi Harold Kushner argues that God is doing the best He can under the circumstances, but He lacks the power to either kill or cure. The openness theists argue that God is always ready with Plan B when Plan A fails. He is infinitely resourceful, they stress, just not really sovereign.

These are roads we dare not take, for the God of the Bible causes the rising and falling of nations and empires, and His rule is active and universal. Limited sovereignty is no sovereignty at all.

The second great error is to ascribe evil to God. But the Bible does not allow this argument. God is absolute righteousness, love, goodness, and justice. Most errors related to this issue occur because of our human tendency to impose an external standard – a human construction of goodness – upon God. But good does not so much define God as God defines good.

How then do we speak of God’s rule and reconcile this with the reality of evil? Between these two errors the Bible points us to the radical affirmation of God’s sovereignty as the ground of our salvation and the assurance of our own good. We cannot explain why God has allowed sin, but we understand that God’s glory is more perfectly demonstrated through the victory of Christ over sin. We cannot understand why God would allow sickness and suffering, but we must affirm that even these realities are rooted in sin and its cosmic effects.

How does God exercise His rule? Does He order all events by decree, or does He allow some evil acts by His mere permission? This much we know – we cannot speak of God’s decree in a way that would imply Him to be the author of evil, and we cannot fall back to speak of His mere permission, as if this allows a denial of His sovereignty and active will.

A venerable confession of faith states it rightly: “God from eternity, decrees or permits all things that come to pass, and perpetually upholds, directs, and governs all creatures and all events; yet so as not in any way to be the author or approver of sin nor to destroy the free will and responsibility of intelligent creatures.”

God is God, and God is good. As Paul affirms for the church, God’s sovereignty is the ground of our hope, the assurance of God’s justice as the last word, and God’s loving rule in the very events of our lives: “And we know that God causes all things to work together for good to those who love God, who are the called according to His purpose” (Romans 8:28).

We dare not speak on God’s behalf to explain why He allowed these particular acts of evil to happen at this time to these persons and in this manner. Yet, at the same time, we dare not be silent when we should testify to the God of righteousness and love and justice who rules over all in omnipotence. Humility requires that we affirm all that the Bible teaches, and go no further. There is much we do not understand. As Charles Spurgeon explained, when we cannot trace God’s hand, we must simply trust His heart.

And so, we weep with those who weep, and we reach out with acts of care and compassion. We pray for those who are grieving and have experienced such loss. We cry for the children lost in this storm, even as we are so thankful for brave people who did their best to save lives as the winds raged. And, we pray: Even so, Lord come quickly.

Adapted from an article originally published on August 20, 2005.