The Courageous Leadership of Winston Churchill 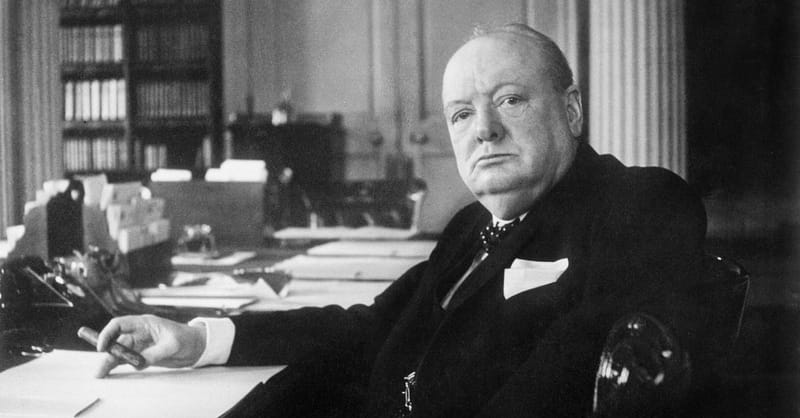 The Courageous Leadership of Winston Churchill

Sir Winston Churchill is widely regarded as the greatest leader of the twentieth century. Born in the splendor of Blenheim Palace on November 30, 1874, Churchill’s life would span the most decisive years of the transition into the modern world. Though faced with great adversity — and driven by a titanic self-confidence — he would emerge as the man who saved England from collapse in its darkest hour. And As Paul Johnson notes in his excellent biography, Churchill’s life was large in every way:

In his ninety years, Churchill had spent fifty-five years as a member of Parliament, thirty-one years as a minister, and nearly nine years as prime minister. He had been present at or fought in fifteen battles, and had been awarded fourteen campaign medals, some with multiple clasps. He had been a prominent figure in the First World War, and a dominant one in the Second. He had published nearly 10 million words, more than most professional writers in their lifetime, and painted over five hundred canvases, more than most professional painters. He had reconstructed a stately home and created a splendid garden with its three lakes, which he had caused to be dug himself. He had built a cottage and a garden wall. He was a fellow of the Royal Society, an Elder Brother of Trinity House, a Lord Warden of the Cinque Ports, a Royal Academician, a university chancellor, a Nobel Prizeman, a Knight of the Garter, a Companion of Honour, and a member of the Order of Merit. Scores of towns made him an honorary citizen, dozens of universities awarded him honorary degrees, and thirteen countries gave him medals. He hunted big game and won a score of races. How many bottles of champagne he consumed is not recorded, but it may be close to twenty thousand. He had a large and much-loved family, and countless friends.

Churchill’s significance extends beyond his political victories and historical influence. I have argued for many years that Churchill represents, in many ways, a model of compelling leadership, even for Christians. In fact, it was this very point that first drew me to Churchill. When I first began to think about leadership as a teenager, I recognized immediately how much Churchill had to teach me. I almost immediately recognized that he was no mere manager—he was a leader of world changing courage. When he spoke, a nation was given the hope and determination to fight a war that simply had to be won—against odds that left even many of his own friends and family convinced that England’s future was already lost.

My personal fascination with Churchill has continued even into today. In my personal library I have two entire sections devoted to Churchill’s own works and books about him. In my book on leadership, Conviction to Lead, Churchill is a regularly reoccurring figure—an exemplar of many of the virtues I think make for compelling leadership. In this article I want to highlight some of the ways Churchill modeled effective leadership, particularly in the face of opposition.

One thing Christian leaders must always remember is that leaders are speakers. Leadership requires bold, convictional, and clear communication. Churchill knew this principle and we would do well to learn from his example. In the throes of World War II, Churchill rallied the British people with his powerful and bold public addresses. As Edward Murrow explained, Churchill did not just lead a nation by sending troops to the war, he also “mobilized the English language and sent it into battle.”  Churchill himself recognized the remarkable effect of his words and the power they had on the nation. In one of his more humble moments, Churchill suggested that the British people themselves had the heart of a lion—“I had the luck to be called upon to give the roar.”

But it wasn’t merely Churchill’s commitment to powerful communication that made him a great leader—it was also his commitment to telling the truth even if that truth was unpopular or invariably bad news. William Manchester once described the difference Winston Churchill made as Britain’s Prime Minister when he led the nation at the point of its greatest peril. Churchill, said Manchester, “could tell his followers the worst, hurling it to them like great hunks of bleeding meat.” Of course, this did not mean that Churchill was crude or cruel, but that he simply told people the truth. Churchill recognized that truth alone could rally the British people in the face of danger and opposition. Churchill told them the truth about their peril, and then he told them the truth about themselves, giving Britons “heroic visions of what they were and might become.”  How much more should ministers of the gospel recognize that the truth, indeed God’s truth, is the only thing that can transform our congregations, equip the saints for the work of the ministry, and steel our spines for the battle against the world, the flesh, and the Devil? Truth-telling is central to leadership. And, of course, for Christians we also recognize that truth-telling is not just central to leadership it is central for growing in the grace of God and central to our public witness for Christ.

One of the most compelling lessons we can learn from Churchill is his convictional leadership even in the face of opposition. This is something ministers of the Gospel need to learn and learn well. Gospel-centered ministry will always come at a cost and will always face opposition. Jesus himself promised us “in this world you will have trouble” (John 16:33).

Churchill may now be recognized as one of the twentieth century’s most courageous leaders but that was not always the estimation of his contemporaries. In fact, at the beginning of the 1930s, Churchill found himself on the periphery of power, and most had written him off as a prospect for future leadership. Because he had twice switched parties, he was not trusted within the conservative party and he was increasingly isolated.

During this time Churchill warned of Hitler’s militarism and the rearmament of Germany, but the British political class considered Churchill to be a warmonger, not Hitler. Churchill wrote articles and gave countless speeches documenting Hitler’s growing menace and his military ambitions. He so irritated Britain’s Prime Minister Stanley Baldwin that Baldwin attempted to subvert Churchill within his own local constituency, just to remove Churchill and his voice from the House of Commons.

Yet when Hitler invaded Poland the credibility of almost all of the British elite was shattered. Only one man had the credibility to lead Britain as it faced its greatest challenge in centuries, and that was Winston Churchill. And of course the only reason Churchill maintained his credibility is because he was willing to speak the truth and warn of coming danger, even while suffering isolation and resentment from those within his own party.

Christians can learn a great deal about leadership from Churchill, particularly in the face of opposition and great danger. What Churchill reminds us is that leadership is impossible without true conviction. Christian leaders must recognize that the stakes are even higher for us than they were for Churchill. The church is waging war against the gates of hell, and we are fighting for the souls of men and women across every nation and people group. Trials, suffering, and challenges are assured as we are faithful in this task. But true leadership demands commitment to truth, even in the face of the most hostile opposition.