For the Fall and Rising of Many in Israel 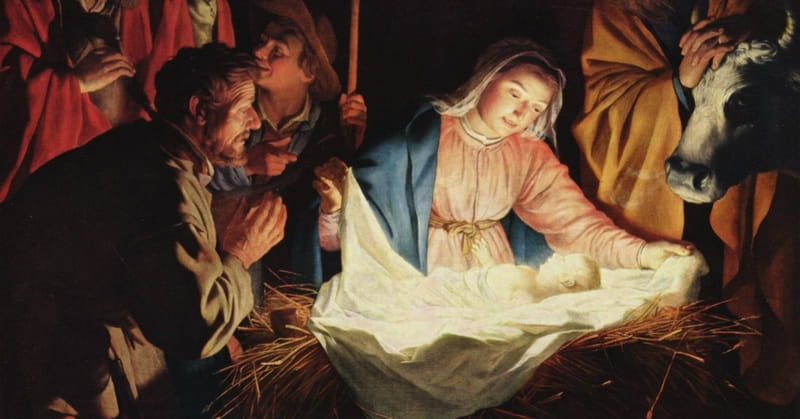 For the Fall and Rising of Many in Israel

If your house is like mine, the Christmas cards are now arriving at full blast. Some come with letters and notes, some with inscriptions and Christmas messages. The most explicitly Christian cards often feature a manger scene or another biblical scene related to the birth of Christ. Angels are common, of course, usually portrayed in majestic pose ready to announce the birth of Christ.

Peace is a major theme. This is entirely legitimate and proper, even natural to Christmas. Jesus is indeed the Prince of Peace, and peace on earth was one of the promises of the angelic host to the shepherds. The Bible makes clear that Jesus is our peace and that peace is both his gift and the accomplishment of Christ’s messianic mission.

I have never received a Christmas card depicting Armagedddon. No one has yet sent me a Christmas card that takes war as its theme, picturing Christ as the rider on a white horse, a sword coming from his mouth, ready to rule the nations with a rod of iron. This, too, is the accomplishment of Christ’s messianic mission–but one rarely, if ever, mentioned at Christmas.

Christmas cards frequently cite the first half of the Gospel of Luke, chapter 2. Few draw from the last half of the chapter. We turn now to Luke 2:22-35:

“And when the time came for their purification according to the Law of Moses, they brought him up to Jerusalem to present him to the Lord (as it is written in the Law of the Lord, “Every male who first opens the womb shall be called holy to the Lord”) and to offer a sacrifice according to what is said in the Law of the Lord, “a pair of turtledoves, or two young pigeons.” Now there was a man in Jerusalem, whose name was Simeon, and this man was righteous and devout, waiting for the consolation of Israel, and the Holy Spirit was upon him. And it had been revealed to him by the Holy Spirit that he would not see death before he had seen the Lord’s Christ. And he came in the Spirit into the temple, and when the parents brought in the child Jesus, to do for him according to the custom of the Law, he took him up in his arms and blessed God and said,  “Lord, now you are letting your servant depart in peace, according to your word; for my eyes have seen your salvation  that you have prepared in the presence of all peoples, a light for revelation to the Gentiles, and for glory to your people Israel.”  And his father and his mother marveled at what was said about him. And Simeon blessed them and said to Mary his mother, “Behold, this child is appointed for the fall and rising of many in Israel, and for a sign that is opposed  (and a sword will pierce through your own soul also), so that thoughts from many hearts may be revealed.”

In this passage we see the obedience of Joseph and Mary to the law, the presentation of the baby Jesus in the Temple, and the declaration of the righteous and devout Simeon. Simeon’s confession of faith is so breathtaking: “Lord, now you are letting your servant depart in peace, according to your word; for my eyes have seen your salvation  that you have prepared in the presence of all peoples, a light for revelation to the Gentiles, and for glory to your people Israel.”

But his prophecy is also bracing: “Behold, this child is appointed for the fall and rising of many in Israel, and for a sign that is opposed  (and a sword will pierce through your own soul also), so that thoughts from many hearts may be revealed.”

You do not often see Luke 2:35 on a Christmas card. In truth, I have never seen this verse used as a Christmas inscription. But, there it is, right in the heart of the Christmas story.

Simeon told Mary, and Mary directly, that the child to whom she had given birth just days before, the child who had been miraculously conceived within her by the Holy Spirit, was “appointed for the fall and rising of many in Israel.”

Indeed he was, and is. The falling and the rising began immediately, and it was not limited to Israel. That fall and rising has never ceased, and it will cease only when the Lord Christ returns to establish his kingdom in its fulness. Until then, headlines tell of fallings and risings from the house of Herod, to the Roman empire, to the Soviet Union, and, inevitably, to the mightiest nations on earth today.

We look out today at the incredible sight of this December 2015 graduating class of The Southern Baptist Theological Seminary. This graduating class is larger than the enrollment of most seminaries. Within what will seem like the blink of an eye, they will be deployed in fields of ministry, even to the ends of the earth. We are witnesses today to one of the rarest of sights, and one of the greatest encouragements to the Christian church. God is calling ministers and missionaries of the Gospel of Christ and they are responding, and they are obeying, and they are coming for a theological education that is, without apology, committed to the faith once for all delivered to the saints and founded upon the total truthfulness and authority of God’s Word.

They are going into a dangerous world. It is a world of fallings and risings. It is a world increasingly marked by turmoil and tumult and trouble. They are going into a world filled with new terrors and new challenges. When they enrolled at Southern Seminary, we had not yet heard of the Islamic State. Now it fills the headlines and claims the future. What will come next? We cannot yet see and we do not yet know.

But Simeon traced the fall and rising of many in Israel back to the baby laid in Bethlehem’s manger. The Lord who is calling out ministers of his Gospel and servants of his church is the Lord who will rule the nations and judge them, who reigns and judges even now. He has sounded forth the trumpet that shall never call retreat.

But, until he comes, we are witnesses to the fall and rise of many — of kings and empires and dynasties and world orders. And it is well with our souls. We send out this company of Gospel ministers into a world filled with horrifying headlines and intractable problems. It is also a world that our Lord Christ describes as white unto harvest. He told us to pray for workers for the harvest, and here they are.

They will witness the fall and rise of many in Israel, and they will preach the kingdom of our Lord and of His Christ.

You can’t put all of that in a mere Christmas card. This gospel demands long faithfulness in ministry. In that light this Christmas season we send these graduates out and marvel at what God will do with them, through them, in them.

So celebrate this commencement day in nothing less than that full and holy confidence. It is the gospel confidence that is the very essence of Christmas.

I am always glad to hear from readers. Write me at [email protected] Follow regular updates on Twitter at twitter.com/albertmohler

This is a commencement address delivered by R. Albert Mohler, Jr., President of The Southern Baptist Theological Seminary, Friday, December 11, 2015. We invite you to watch the ceremony and service live at 10:00 AM EST at www.sbts.edu/live.