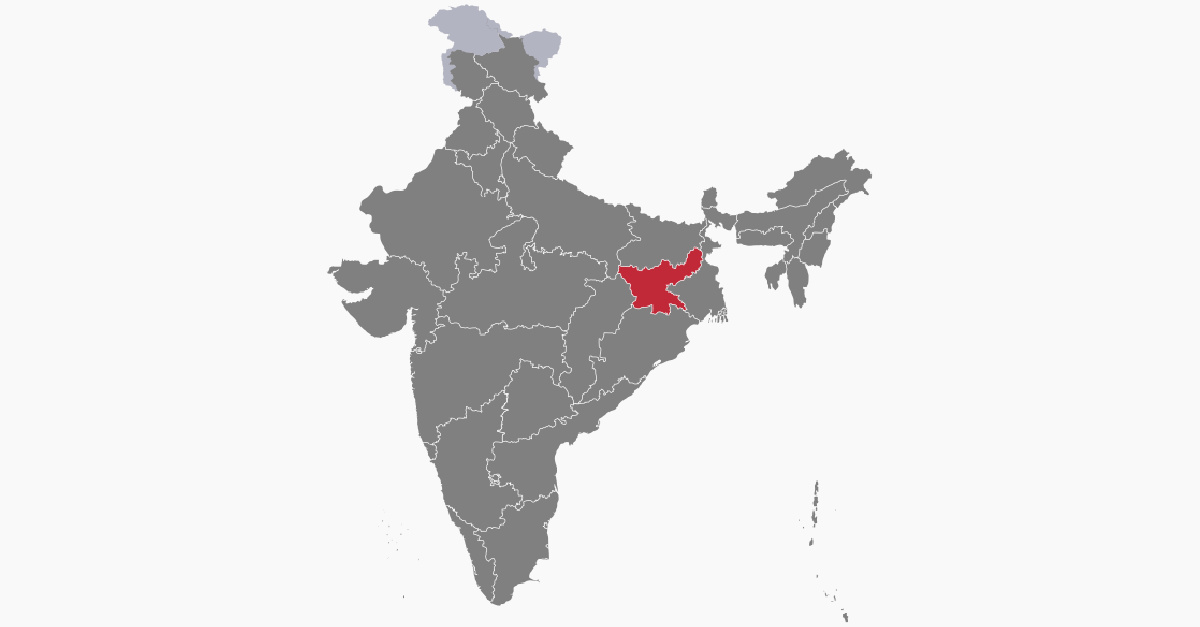 NEW DELHI, July 27, 2020 (Morning Star News) – A 26-year-old mother became the fifth Christian in two months to be killed in India last week when she refused to hand over her daughter to be raped by Hindus who had assaulted the girl and other Christian minors, sources said.

Two masked Hindus slit the throat of Sunita Devi (name changed for security reasons) in Regadi village, in Jharkhand state’s Khunti District, when she came out her door at 1 a.m. and refused their demand for her young daughter, according to the sources.

“The two suspects had raped Devi’s minor daughter three times in the past besides three other Christian juvenile girls, and all four of the minor girls belong to my church,” pastor Jaymasih Nag of Grace Family Ministry (Anugrah Pariwaar Seva) told Morning Star News.

At about 1 a.m. Devi noticed two men at the window of the room where she had been sleeping with her children and decided to get up and send them away, Pastor Nag said, based on what the minor girl had told him.

“Unaware of their intentions, Devi with the help of her cell phone torch, stepped out of the house to shoo the men away,” he said. “Devi’s daughter followed her mother. Before long, the men attacked Devi and she fell on the ground dead. On seeing her mother fall on the ground, the minor girl quickly ran inside the house and latched the door from inside.”

The girl thought there could be more men at a distance, but because of darkness she could see only two of them with their faces covered, he said. According to police, after the assailants killed Devi, they dragged her body into a nearby jungle, put her corpse into a sack and threw it into a river about two miles away. Police found her body at 2 p.m. and sent it for autopsy.

Pastor Nag saw her corpse and said her throat was completely slit.

As her husband works in Odisha state to provide for the family, Devi had lived alone with their two sons and two daughters. She had kept quiet about the torment her family was going through and was dealing with the rapists herself, thinking they would not go to the extent of killing her, Pastor Nag said.

Her husband and the Christian parents of another rape victim went to police only after the killing of Devi, sources said. On the basis of statements from the two girls, officers at the Khunti police station registered a First Information Report and arrested two suspects, station in-charge Jaideep Toppo said.

“At the complaint of the two minor girls, we arrested two suspects, and they have confessed to their crime of raping Devi’s daughter three times and the other girl once,” Toppo told Morning Star News.

Asked if the suspects killed Devi, Toppo said only, “The two men are arrested for rape and not killing.”

Pastor Nag pastors his church in nearby Saridkel. Devi and her family began attending his church six years ago. Hers is one of eight Christian homes in her village of 25 families.

The two men arrested are Hindus who live in Saridkel village, where Pastor Nag has led regular worship services for the past 12 years, less than a mile from Regadi.

Pastor Nag said that girls from Christian homes are intentionally targeted by Hindus who influence followers of tribal Sarna religion, trying to introduce Hindu gods into their rituals and uniting with them against Christians.

“Why are all their targets Christian girls?” he said. “Though the opposition might not be visible outwardly, there is constant threat to believers in various forms.”

Other area Christian leaders also said the rapes and the killing were clear cases of persecution.

“Christians are soft targets, and the underlying factor of such incidents are always because of their faith,” a Christian leader from Ranchi, Sandeep Oraon, told Morning Star News. “This belt of Jharkhand has been witnessing rising persecution, and it is very real for the Christians who are living it every day.”

Asked if the assaults against four Christian girls and Devi pointed to a targeting of Christians, Station in-charge Toppo told Morning Star News, “You are thinking too much.”

Pastor Nag noted the likelihood that that there were more than two rapists.

In a culture that shames rape victims and facing threats from the assailants, the victims did not quickly reveal the crimes. After Devi’s husband and the other rape victim’s family took the bold step of approaching police, two more families in his church, residents of Saridkel, informed Pastor Nag that their minor daughters also had been victims of the two men, Pastor Nag told Morning Star News.

“I am shocked that neither Devi nor the other three families ever spoke to me about the traumatic experience they and their children had been going through,” he said. “They fear the adverse consequences their families will have to face for speaking out. Devi probably was afraid to speak out, knowing well the consequences she and her daughter would have to face, and thus she did not approach the police.”

The rapes and killing have terrified Christians in the two villages and surrounding areas, he said.

Christians begin facing opposition from Hindu and Sarna tribal religion villagers from the moment they put their faith in Christ, Nag said. Opposition also drove him from Saridkel for many years, forcing him to settle in a nearby city, he said. Extremists threatened to damage his church building, he said, and only in January did he dare return to his native Saridkel.

A well-placed source told Morning Star News that there is immense political pressure in this case.

“Initially the police had arrested four suspects, but they let the other two go after some financial ‘give-and-take,’” the source said.

On Saturday (July 25) the arrested men were taken to court to record their statements, and a member of the Legislative Assembly belonging to the Hindu nationalist Bharatiya Janata Party accompanied them in support, the source said.

Station in-charge Toppo said he was not aware of any confession to homicide.

Though the autopsy was performed the same day the body was discovered, July 20, Toppo said he was still awaiting the autopsy report.

“The weapon used for killing is not clear yet; wounds on the deceased’s neck and back were visible,” he told Morning Star News. “The rest will be clear in the report.”

Pastor Nag said he found police proceedings were “slow” and “ignoring the obvious.”

“Though it is obvious that these men brutally murdered Devi after she refused to give her daughter to them, police are still slow in taking action on the ‘killing’ front,” he told Morning Star News.

Asked about this allegation, Toppo reiterated, “Investigations are underway, and nothing can be said until the investigation is complete.”

Devi was laid to rest on her own farmland on Tuesday (July 21). She is survived by her husband and four children, ages 2 to 13.

On June 28 she had sent her daughter to buy some vegetables at a nearby market. The girl went with a neighbor friend, and on their way the two suspects abducted them and took them to a secluded place, where they locked them in a room, sources said.

The two girls were kept in the room, which was locked from outside, with men taking turns to guard it until 9 p.m.

“These men entered the room at 9 in the night and raped both the girls,” Pastor Nag said. “This was the third time that Devi’s daughter was being raped and first time when her friend became their victim.”

The families of the girls searched for them throughout the night. The girls were released the next morning and informed their parents upon reaching their homes.

Devi’s daughter told her the rapists threatened severe harm if they told anybody about the assault, the pastor said.

“It was already traumatizing for Devi and her daughter that just like previous three times, the minor girl could be abducted from anywhere, anytime and dragged to a secluded place to be raped again and again,” Pastor Nag told Morning Star News. “It was since then that Devi started to receive constant phone calls from these men demanding for her daughter to be given to them for their sexual pleasure.”

Informed of the previous rapes, Toppo expressed surprise and told Morning Star News that the complainants had not reported the prior two rapes, and that police would investigate when they do so.

Devi’s husband has taken his four children out of the village, and they are living in an undisclosed location. He has received constant phone calls from the suspects’ friends and supporters pressuring him to withdraw the charges, Pastor Nag said.

“There are threats to his and his children’s lives,” the pastor said.

Including the death under mysterious circumstances of a Christian woman in Chhattisgarh state the last week of May, Devi’s death is the fifth religiously motivated killing of a Christian in India in two months. On July 10 in Maharashtra state, Maoists killed pastor Munshi Devu Tado in Bhatpar village, Gadchiroli District.