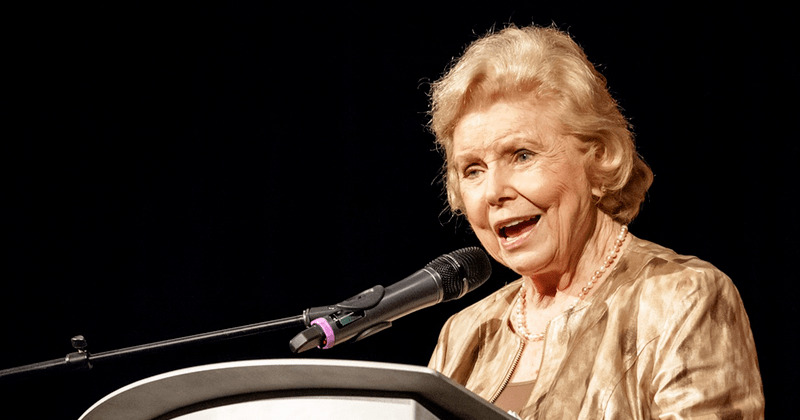 Vonette Zachary Bright, co-founder of Campus Crusade for Christ (now known as Cru in the U.S.), the world’s largest Christian ministry, died today due to complications from acute leukemia. She was 89.

Fueled by a desire to help others meet Christ and learn to follow him, Vonette and her late husband Dr. William “Bill” R. Bright spent more than half a century leading and building Campus Crusade for Christ to its current size of more than 25,000 staff members and 300,000 volunteers working in 173 countries.

In 1951, the Brights launched Campus Crusade for Christ at UCLA with the goal to “win the campus today, win the world tomorrow.” Though the Campus Ministry is still the largest branch of Campus Crusade, it is joined by other ministries like Athletes in Action, The JESUS Film Project, The Josh McDowell Ministry and FamilyLife.

However, Vonette’s influence reached far beyond Campus Crusade for Christ. Her commitment to prayer led to the founding of the National Prayer Committee, a group of leaders who seek to motivate other Christians to unite in prayer for spiritual awakening in America. In 1988, she successfully petitioned Congress to designate the first Thursday of every May as the permanent day for the National Day of Prayer. Unanimously approved by both houses of Congress, President Ronald Reagan signed the legislation into law. She then served for nine years as chairwoman of the National Day of Prayer Task Force. The movement today includes more than 2 million people in 30,000 observances around the country.

In a 2011 letter from Rev. Billy Graham to Vonette, Graham wrote, “Your single-minded focus on the power of intercessory prayer has been both an encouragement to my life and a model for the church. Heavenly records will one day reveal the full impact of your prayer life and the teaching ministry in the lives of countless persons who have come to faith in Christ.”

In 1993 she launched Women Today International, a ministry responding to the needs of women as they grow in their relationships with Jesus Christ.

Vonette served as chairwoman of Bright Media Foundation, which strives to make the writings and teachings of Bill and Vonette Bright available to each generation. She authored more than a dozen books, most highlighting the themes of prayer, evangelism, walking with God and hospitality.

In 2000 the Brights received the Lifetime Inspiration Award from Religious Heritage of America Foundation. Vonette received honorary doctorate degrees from Los Angeles Bible College in 1979 and from King Sejong University, Seoul, Korea, in 1985.

Vonette Bright is survived by her brother, Roy Curtis Zachary; her sister, Deanne Rice; her sons, Zachary Dale and Bradley Randolph; her “daughters-in-love,” Terry and Katherine; and four grandchildren.

For more information about her life and legacy, go to VonetteBright.com.