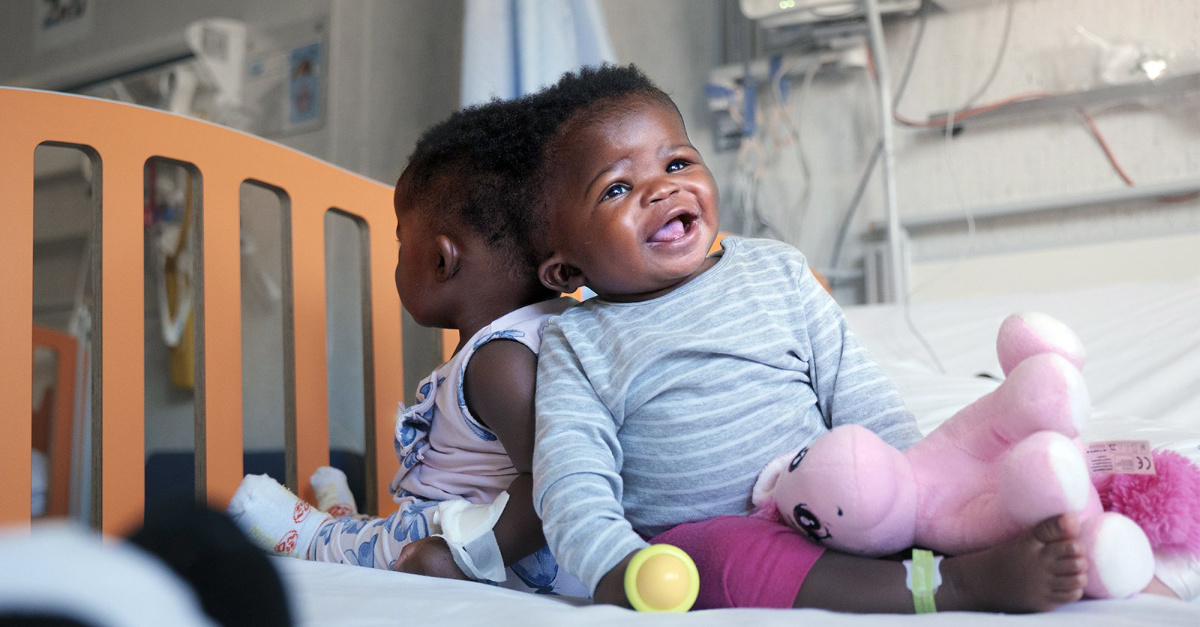 VATICAN CITY (RNS) — Vatican-owned hospital Bambino Gesú made history on Tuesday (July 7) when it announced it had successfully separated conjoined twins brought to Rome from the Central African Republic.

“Ervina and Prefina have been born twice,” said the teary-eyed mother, Ermine, during the press conference on Tuesday.

“If we had stayed in Africa I don’t know what destiny would have awaited them. Now that they are separate and well, I would like for them to be baptized by Pope Francis, who has always cared for the children of Bangui. My little ones can now grow up, study and become doctors to save other children,” she said.

The twins were born in the town of Mbaiki, in the Central African Republic, joined at the back of the head. In July 2018, Mariella Enoc, the president of the pediatric hospital Bambino Gesú, met the twins as infants while on a mission to the country and decided to bring the girls back to Rome.

“They had no chance at survival,” Enoc told local reporters, “even a cold could have been enough to kill them.

“When you encounter lives that can be saved, it must be done. We cannot and we must not turn our gaze away,” she said during the press conference.

Ervina and Prefina were brought to Rome with their mother on September 10, 2018, as part of the humanitarian efforts conducted by the hospital and sponsored by the Vatican. They were immediately put under observation, and doctors found they were healthy, though the heart of one of the sisters was supporting the majority of both girls' vital organs.

“The team at the hospital studied all possibilities and possible options. It was guaranteed that the twins had the same chance of survival. So it wouldn’t get down to having to sacrifice one,” Enoc said.

Conjoined twins occur once in every 50,000 to 60,000 births. Craniopagus twins, or conjoined twins who are fused at the cranium, are even more rare. Only about 1 out of 2.5 million survive birth, according to data presented by the Bambino Gesú hospital.

Technological and scientific advancement has helped lengthen the life expectancy for conjoined twins, but it wasn’t until the last 20 years that doctors were able to successfully separate two sets of twins who were joined at the skull.

But the case of the Bangui twins is even more unique. Ervina and Prefina were not only joined at the skull and skin, but they also shared a large portion of the venous system, responsible for carrying blood across the body.

“This case was rare in its rarity,” said Dr. Carlo Efisio Marras, the head neurosurgeon at Bambino Gesú who oversaw the operation.

Doctors worked for over a year preparing for the operation, using cutting-edge tools for 3D and 4D rendering. The twins were separated in three different operations. The first and second took place in May and June of 2019, when doctors carefully severed the venous system that carries blood from the brain to the heart.

The final operation took place June 5 of this year. The twins were successfully separated after 18 hours of work by more than 30 doctors and nurses. On June 29, Ervina and Prefina turned two and are perfectly healthy in separate beds close to their mother.

“We are really happy with the result,” Marras said. “The cerebral structures of the two girls are absolutely intact with a positive functional outlook concerning quality of life, which is optimal and ideal for both girls.”