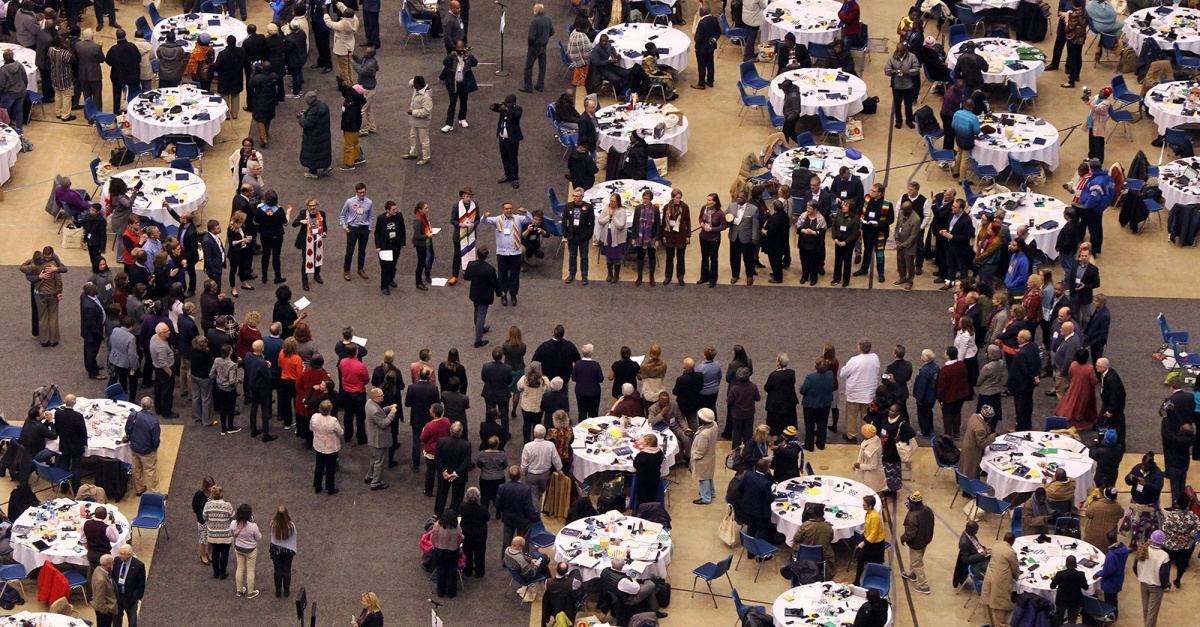 (RNS) — Were 2020 going as planned, United Methodists from around the world would be wrapping up a two-week meeting in Minneapolis, where they were expected to discuss a measure to split the denomination.

But, as it is, the coronavirus pandemic has forced people into their homes, closed businesses and canceled events well into the summer.

The quadrennial United Methodist General Conference has been postponed until next year — possibly until late August and early September 2021.

Many U.S. United Methodist leaders see the delay as a blessing, allowing more time and cooler heads to consider a split. But some have also expressed concern over continuing harm to many in the denomination eager to move on after decades of debate over the role of LGBTQ Christians in the church.

“Some people have said to me, 'This gives us time to take our breath and see if there are new possibilities,’ and also there are some persons for whom the delay is continued injustice, and that's harmful,” said the Rev. Kenneth Carter, resident bishop of the Florida Conference of the United Methodist Church and past president of the denomination’s Council of Bishops.

“So to say the pandemic has become the agenda is not to suppress the need for justice and inclusion.”

Delegates to the General Conference were expected to take up a proposal to split the denomination, called “A Protocol of Reconciliation and Grace Through Separation.” The proposal, negotiated by 16 United Methodist bishops and advocacy group leaders from across theological divides, would commit $25 million to create a new conservative “traditionalist” Methodist denomination.

Calls to split one of the largest denominations in the United States have grown since last year’s special session of the United Methodist General Conference approved the so-called Traditional Plan strengthening its bans on the ordination and marriage of LGBTQ United Methodists.

The protocol wasn’t the only thing on the agenda for the global meeting, where delegates also take up important matters such as setting the denomination’s budget for the next four years.

A team of United Methodist leaders has been discussing the implications of the unprecedented postponement, including how people continue to serve in different boards and agencies and how things are budgeted, Carter said. The group that negotiated the proposed protocol, which includes the bishop, met once in March after the postponement was announced to check in with one another, as well, he said.

“I think in the same way work is going to be profoundly changed, I think how we meet will be as well,” he said.

The bishop said he hopes that will include the ability to conduct some denominational business virtually, though, he admitted, that would require some changes to its polity.

But, Carter said, “the delay of the General Conference did not happen in a vacuum.”

The decision came with much consideration of how to care for congregations and those most vulnerable to the coronavirus — how to care for “the anxiety, the trauma, the suffering, the grief” of the moment.

And United Methodists on all sides understand that the postponement isn’t just kicking the can down the road when it comes to making decisions about the denomination's inclusion of LGBTQ members, something that has come up at every General Conference since the 1970s, according to Jan Lawrence, executive director of the LGBTQ-affirming Reconciling Ministries Network.

“I think that the reaction to a delay in the General Conference for any other reason that I can think of would have been very negative,” Lawrence said.

“Everyone understands this, and no one wants to put anybody at risk by having to gather before it's safe, and no one wants for a part of the church not to be able to be present because they can't get visas or they can't travel. So I think that has made the reaction different.”

On May 5, the day the General Conference would have started, Reconciling Ministries held a virtual worship service.

“As a movement, we took a breath,” said Lawrence, who was part of the protocol negotiations.

That’s not to say they don’t have concerns about the pause, she said. There are questions about how the denomination will get around rules that it meet every four years and how it will set its budget before it can be approved by delegates.

And while she said Reconciling Ministries “absolutely" understands why the meeting needed to be postponed, “the harm is immense” to LGBTQ United Methodists. The Traditional Plan took effect in January and will continue unless it is repealed according to the proposed protocol, though negotiators have asked for a moratorium on its enforcement.

That could be more than a year away — the Council of Bishops has suggested rescheduling the meeting for Aug. 31 to Sept. 10, 2021, at the Minneapolis Convention Center.

The Commission on General Conference has not yet confirmed dates for the meeting in 2021. A group of young delegates has circulated a petition asking them to reconsider the bishops’ suggestion, as those dates conflict with the start of the academic year.

The Rev. Keith Boyette — president of the Wesleyan Covenant Association, which supports the protocol and plans to join the new traditionalist Methodist denomination if it passes — said his constituency runs the gamut of feelings about the postponement.

The delay in the meeting is also “hope delayed and deferred” for many who have been imagining the possibilities on the other side of the protocol, said Boyette, who was part of the protocol negotiations. If the General Conference was concluding Friday (May 15) as planned, he said, they could be moving into the “implementation phase” of the protocol.

They have concerns, too, he said, that unresolved conflict might keep the church from being as effective as it could be in this season and delay many ministries the denomination feels called to do.

“But,” Boyette said, “most people have become very realistic and see this as a season where the plans that we're committed to continue to be perfected, that there's additional time for churches and individuals to become better informed and to make informed decisions.”

In the meantime, the Wesleyan Covenant Association continues to prepare for the launch of a traditionalist denomination and develop a draft Book of Doctrines and Discipline.

It has also created a video series for clergy on doing ministry during a pandemic and is encouraging its members to support the United Methodist Committee on Relief’s COVID-19 Response Fund.

“We're certainly not encouraging people to ignore what is happening presently and defer response so they can focus on something in the future,” Boyette said.

For others, the delay in the General Conference doesn’t change much at all.

The Rev. Alex da Silva Souto is co-convener of the United Methodist Queer Clergy Caucus, one of the leaders of UM-Forward and a General Conference delegate from the New York Conference. He’s also part of a coalition of groups that describes themselves as “liberationists,” rather than “progressives,” breaking with the progressive United Methodists who he said have partnered with "centrists" since the special session.

Some have been discussing the possibility of forming a third denomination. Its working title is the “liberation Methodist church,” inspired by the liberation theology developed by Latin American Roman Catholics in the 1950s and 1960s, da Silva Souto said.

He called the postponement a “curveball.”

But, he said, “We’re not waiting for the protocol to answer the call that we feel, which is love and liberation right now.”

The Rev. Cynthia Fierro Harvey, resident bishop of the Louisiana Area and current president of the Council of Bishops, has a corner in her home where she often finds herself lighting a candle and praying a passage in 2 Timothy, paraphrased: “Give me a spirit, not of fear, but of love and a whole lot of things that I don't even know I need today.”

She has gone through a lot of candles in recent weeks, she said.

Before the Commission on General Conference postponed the 2020 meeting, Harvey, along with Carter, had signed a letter recommending they do so. But she said she still felt disappointed when it happened, knowing how much work had gone into developing the protocol and planning the General Conference. She, too, had been part of the negotiating team.

There was also disappointment for “some of us who thought finally we're getting on the other side of this 50-something-year-old disagreement and maybe we can move forward — literally move forward — and in a way that's got some integrity and also in a way that honors where people are, knowing we don't agree and might not ever agree on the certain things,” she said.

But that disappointment quickly turned to focus on the coronavirus pandemic, on helping people, on “flattening the curve” and all the vocabulary that has become part of life in 2020, according to the bishop.

“That’s where we are right now as we figure out how do we move forward responsibly and what do we do with what we’re learning in the process,” she said.

After years of acrimony within the denomination, Harvey said, maybe the crisis has brought United Methodists together, if only for a moment.