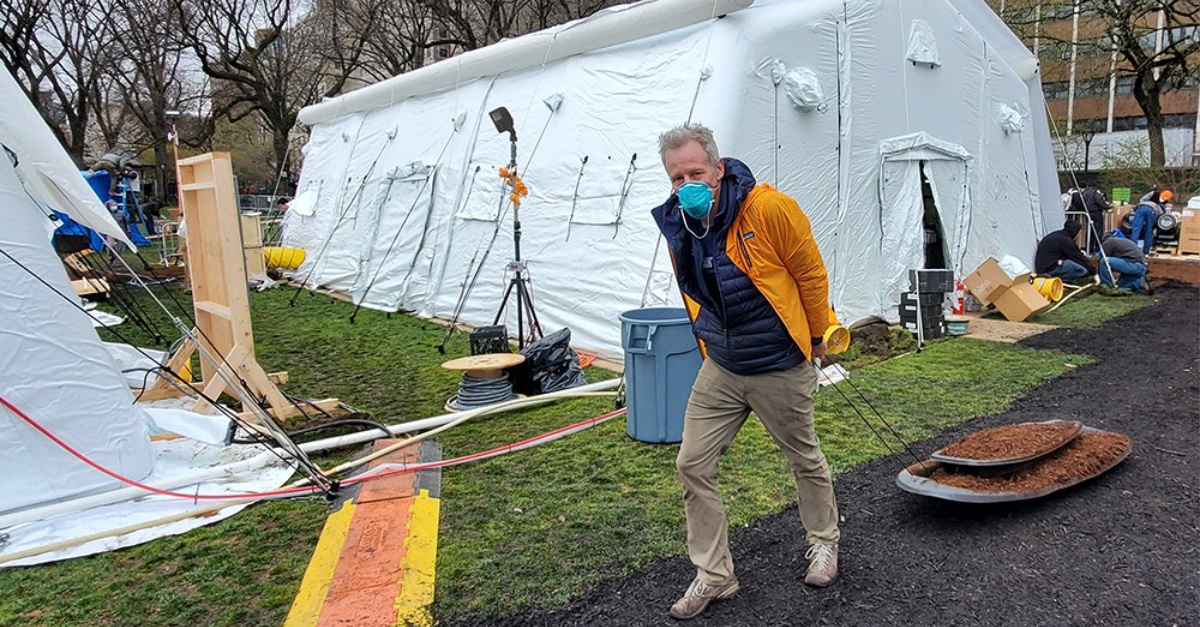 (RNS) — Whitney Tilson and his wife, Susan, were out walking their dog early one Sunday morning when they noticed workers unloading trucks and stacks of blue tarps in the East Meadow of Central Park, right outside their Fifth Avenue apartment building.

Later that afternoon, Tilson saw some white tents rising up out of the ground bearing a name he had never heard of: Samaritan’s Purse.

After learning the group was setting up a series of tents for a 68-bed field hospital to treat overflow coronavirus patients from Mount Sinai Hospital, Tilson agreed to lend a hand.

He hasn’t stopped since.

In the course of the past four weeks, Tilson, who is not religious and had never heard of Franklin Graham, the conservative Christian leader of Samaritan’s Purse, has become one of the field hospital’s most dedicated volunteers and champions.

He’s befriended many of the staff, donated shovels and sleds to help spread 2 tons of mulch across the muddy lawn in between the tents, and gifted thousands of dollars worth of bananas, apples, Starbucks Frappuccinos, soda, potato chips and other snacks to those looking after the sick.

“It’s an incredibly impressive organization,” said Tilson, 53, a retired hedge fund manager who writes an investment newsletter. “I have no doubt they are delivering world-class critical care to my fellow New Yorkers stricken with COVID-19. Every single person I’ve met has been a genuinely nice person and very competent and good at their job.”

New Yorkers haven’t quite known whether to embrace or rebuff the evangelical humanitarian relief organization from North Carolina. As soon as it became clear that New York City was becoming the epicenter of the pandemic, Samaritan’s Purse struck an agreement with the overstretched Mount Sinai Hospital to treat a surge of patients needing immediate medical help.

But even before the field hospital accepted its first patient, old culture war issues, with no connection to the coronavirus, broke open. For one, New York’s mayor, its council speaker, even the state’s attorney general, were immediately pressed to assure New Yorkers the field hospital would not discriminate against Muslims or LGBTQ people in offering care.

All contracted staff at the evangelical field hospital — nurses, doctors, pharmacists and lab technicians — must sign a statement of faith that includes a clause opposing same-sex marriage. The organization’s 11-point statement of faith declares, “we believe that marriage is exclusively the union of one genetic male and one genetic female.”

(Graham has also made controversial statements about Islam in the past and is staunchly anti-abortion.)

That’s an anathema to many liberal New Yorkers who pride themselves on living in one of most gay-friendly cities in the world as well as one of the most culturally diverse.

Plans to turn the Cathedral of St. John the Divine into a field hospital were abruptly shelved, in part because the cathedral, the seat of the liberal Episcopal Church in New York City, did not want to partner with Samaritan’s Purse on the project.

The city’s Commission on Human Rights has demanded that Samaritan’s Purse explain in writing how it offers aid to ensure it does not violate the city’s nondiscrimination laws. Samaritan’s Purse, which has treated 153 patients since it opened April 1, says it does not discriminate in who it treats, and says it has never done so in its 50-year history.

In this time of growing polarization and identity politics, Tilson has stood his ground, even as it has cost him some friendships.

He and his wife, who is Jewish, have been members of Central Synagogue, one of the city’s oldest Jewish congregations, for 20 years — rearing their three daughters in the faith.

When his synagogue put a notice online that Tilson was collecting boots and socks for the medical teams and Bluetooth speakers for patients, some congregants were incensed.

“The values harbored by this group and its founder just completely fly in the face of what Central stands for,” one congregant told The Forward, an online Jewish publication.

But Tilson, who said his views about same-sex marriage (as well as his views on Muslims and abortion) are “polar opposite” those of Graham, has continued to defend his volunteer work.

“I’m supporting a hospital that is saving people’s lives,” he said. “I’m not endorsing the ideology of the founder of the organization.”

In recent weeks, Tilson has offered the use of his address for any of the field hospital crew who would like to receive mail while they’re working at the hospital. He’s also made available four bicycles for their use and emailed them some trails they might like to use around the park.

Last week he took a call from Graham, who wanted to thank him for his volunteer efforts.

Graham even invited Tilson to come down to North Carolina to tour the organization’s headquarters.

Tilson said he plans to take him up on the offer. He’s a businessman and he likes to study what he called “high-performing organizations.”

On Sunday (April 19), Tilson and two of his daughters took a break from New York City to hike up Breakneck Ridge, a mountain along the Hudson River. A fitness buff, he said his goal this year is to rope climb to the nose of El Capitan, a 3,000-foot rock formation in Yosemite National Park.

Tilson said he has tried to teach his daughters, aged 23, 21 and 17, how to keep active and fit, but even more to do good in the world.

The coronavirus pandemic, which has killed more than 10,000 people in the city alone (about 20,000 have died in the Tri-State region of New York, New Jersey and Connecticut), has moved him deeply.

In a video he posted to YouTube explaining his unflagging support for the field hospital, he chokes up talking about the toll the virus has taken on his fellow New Yorkers.

On Sunday, just before heading to Costco to fill up his Volvo hatchback with more snacks for the medical workers — this was his fifth trip — he reiterated why he thinks New Yorkers ought to be grateful to Samaritan’s Purse, given the selfless work they are doing to help save lives.

“Their primary mission in life is not to go out and have hatred toward gays,” he said. “They believe what the Bible says, that homosexuality is a sin — yes. But it is not what drives them. What drives them is, ‘How can I do God’s work by healing people and saving lives?’”