Trump to Tackle Middle East Peace in Trip to Israel 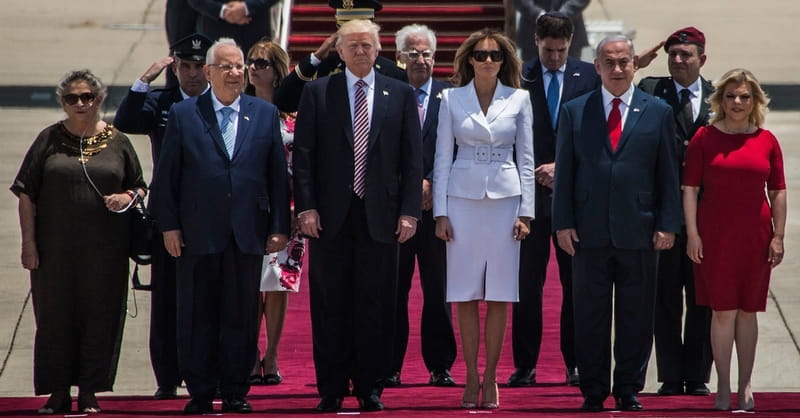 Trump to Tackle Middle East Peace in Trip to Israel

President Trump embarked on a two-day trip to Israel on Monday. He will be meeting several Israeli leaders and putting his deal-making skills to the test as he discusses avenues for Middle East peace.

The President was greeted by Israeli Prime Minister Benjamin Netanyahu, according to the New York Times. He will be utilizing his time with Netanyahu and other Israeli leaders to pursue what he has called “the ultimate deal” of achieving peace in the Middle East--something that has eluded previous American presidents.

“We have before us a rare opportunity to bring security and stability and peace to this region and its people, defeating terrorism and creating a future of harmony, prosperity and peace,” Trump said after arriving in Tel Aviv and before taking a helicopter to Jerusalem. “But we can only get there working together. There is no other way.”

Netanyahu also expressed hopes that peace can be achieved: “Israel’s hand is extended in peace to all our neighbors, including the Palestinians,” he said. Nevertheless, he stipulated that for a lasting peace, Israel needs to be recognized as a legitimate state:  “The peace we seek is a genuine and durable one, in which the Israeli state is recognized, security remains in Israel’s hands, and the conflict ends once and for all.”

Trump is visiting Israel earlier than previous presidents, some of whom didn’t visit the country till their second terms.

Israeli leaders hope that the President will not back down from his promise to move the U.S. embassy in Israel from Tel Aviv to Jerusalem. Although taking a very pro-Israel stance during his campaign, Trump has since softened that stance.

The recent controversy surrounding the alleged disclosure of classified information by the President to Russian officials, which information involved Israel, could lead to increased challenges in peace negotiations.

Photo: US President Donald Trump and his wife Melania Trump(C) standing surrunded by Israeli Prime Minister Benjamin Netanyahu and his wife Sara Netanyahu (R) as Israeli President Reuven Rivlin and his wife Nehama Rivlin (L) during an official welcoming ceremony on his arrival at Ben Gurion International Airport on May 22, 2017 near Tel Aviv, Israel. This will be Trump's first visit as President to the region, and his itinerary will include meetings with the Palestinian and Israeli leaders.