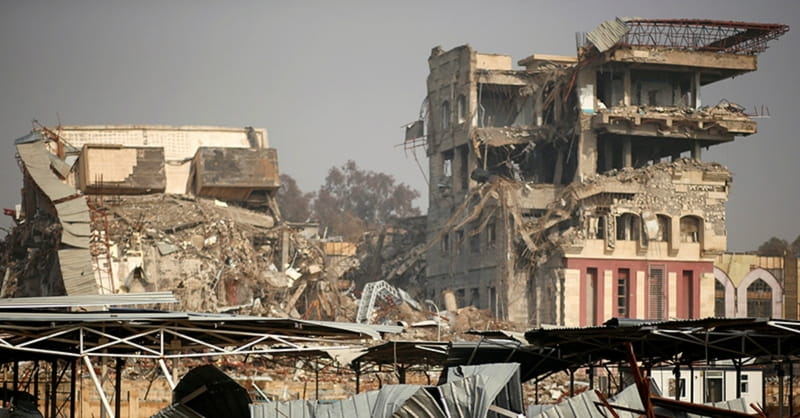 As confusion continued over President Donald Trump’s ban on refugees and travelers from seven Muslim countries, Catholic leaders from Iraq are warning that the policy change will hurt thousands of Iraqi Christians languishing in Middle East refugee camps.

“They would like to continue their lives in Europe, Canada, Australia or America,” Archbishop Bashar Warda of Erbil told a news conference in Rome on Monday (Jan. 30).

Despite Trump’s promises to give preference to Christian refugees seeking to enter the U.S., “(h)is decision will make it harder for them. It is not easy to distinguish from their names who is Christian and who is Muslim.”

Warda told the media he had personally been affected by the visa ban.

After stopping in Rome he was due to meet with Republican and Democratic lawmakers in Washington this week to discuss the plight of Christians displaced by the violence perpetrated by the Islamic State group.

But Warda was forced to cancel his trip after the immigration ban was imposed.

“I am one of those people who is not able to travel. I cannot get on the plane and I hope to know by tomorrow if I will go,” Warda said. “We will see.”

There are an estimated 100,000 Iraqi Christian refugees living in limbo in camps located in Lebanon, Turkey and Jordan.

Warda is a leader of the Chaldean Catholic Church in Iraq, the largest body of Christians in the country and one that has been decimated since the U.S. invasion in 2003, an action that the Vatican and Iraqi church leaders strongly opposed.

In other comments published Monday, Chaldean Patriarch Louis Raphael I Sako of Baghdad also said Trump’s policy of preferential immigration for Christians was a “trap” and would “create and feed” tensions with Muslims.

“Every reception policy that discriminates (among) the persecuted and suffering on religious grounds ultimately harms the Christians of the (Middle) East, because among other things (it) provides arguments to all propaganda and prejudice that attack native Christian communities of the Middle East as ‘foreign bodies,’ groups supported and defended by Western powers,” Sako said, according to the Catholic news agency Fides.

“Those who seek help do not need to be divided according to religious labels. And we do not want privileges,” he said. “This is what the Gospel teaches, and what Pope Francis pointed out, who welcomed refugees in Rome who fled from the Middle East, both Christians and Muslims without distinction.”

Religious leaders from Catholic, Protestant and evangelical faiths have attacked Trump’s policy change as discriminatory and inhumane. They claimed the executive order pitted one faith against another.

The Iraqi conflict is far from over and a battle is now raging for control of the strategic city of Mosul, although government forces have reportedly gained ground against Islamic State militants in the east of the city.

The number of Christians in the country has fallen from 1.3 million in 1987 to less than 300,000 today, according to church estimates.

Warda urged Trump to use his power for creating peace in the Middle East and elsewhere in the world.

“We would like to see a more peaceful world, no violence, no extremism,” he said. “The Middle East has suffered so much.

“We have so many IDPs (internally displaced persons), so many victims. We are tired. If he (Trump) could do something and use his political power to put an end to the violence we would be grateful.”

The archbishop said 10,000 Christian families had sought refuge in Erbil after the Islamic State group cut a swath through towns and villages in northern Iraq, destroying homes and churches.

“You can see the hatred in the destruction of the churches and the homes that were looted,” he said.

Warda said Christians wanted to rebuild their communities but needed greater assurances from the Iraqi authorities that it was safe to return home.

“The future is vague; no one knows if there will be another war after this,” he said. “If we don’t act, more Christians will leave the country.”

Pope Francis has spoken out many times in support of Christians persecuted for their faith in Iraq and elsewhere in the Middle East.

At a prayer service he attended with Chaldean Catholics during his visit to Georgia in September, he cited the Christians in Syria and Iraq.

“Save the victims of injustice and maltreatment from their suffering,” he prayed.

Photo: Despite Iraqi forces recently retaking eastern Mosul from Islamic State, the Sunni Muslim jihadists are expected to put up a fierce fight in other parts of the war-torn nation. Destroyed buildings in Mosul seen on Jan. 23, 2017.