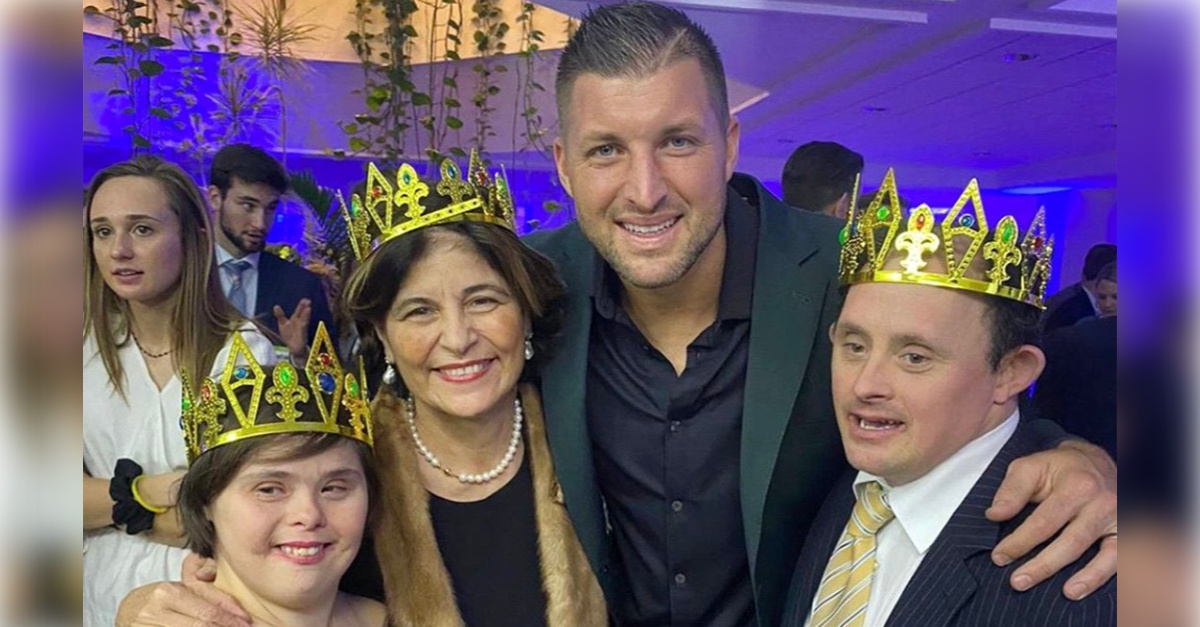 VATICAN CITY (RNS) — Perhaps the last thing one would expect booming from the speakers of a Vatican-sponsored event is “Scream & Shout” by Will.i.am and Britney Spears. But the Catholic Church teamed up with sports celebrity Tim Tebow on Tuesday night (Feb. 4) and set formalities aside to give people with special needs a night to remember.

“That’s what we want to do. We want to lift other people and share the love of Jesus with them.”

The sixth installment of the event, called Night to Shine, took place for the first time in the Eternal City with the patronage of the Pontifical Academy for Life, a Vatican think tank aimed at promoting discussion and research on questions surrounding human life.

The Pontifical University Regina Apostolorum on the outskirts of Rome hosted the prom night, where people with disabilities had their photos taken on the red carpet, enjoyed a pizza-filled buffet and danced the night away with pop songs selected by a DJ.

Wheelchairs skirted and drinks were dropped as everybody let loose on the dance floor, before each participant was named prom king and queen.

“It’s the first time we attend a party like this,” said Angela Agresti while pushing the wheelchair of her young daughter, who cannot speak, on the busy dance floor. They were invited by a friend and chose to come because “it seemed like an opportunity to be with others, which is not easy for them,” she said.

According to Tebow, the Hollywood glamour of the night speaks of a society that views red carpets as signifying importance and the people appearing on them as having a special value.

The athlete drew public attention as a Heisman Trophy quarterback in college. He went on to play for the Denver Broncos and New York Jets. Today, he plays baseball in the minor leagues for the New York Mets organization after announcing his retirement from football in 2016.

Though Tebow’s professional football career was short-lived, he made a lasting impression. His custom of kneeling to pray during games turned into a national phenomenon and became known as “Tebowing.” His parents, Pamela Elaine and Robert Ramsey Tebow II, served as Baptist missionaries in the Philippines, so faith always played an important role in his life, he said.

“My life was changed when I was 15 in the jungles in the Philippines and I met a man with his feet on backwards,” Tebow said, adding that after seeing how the village scorned and cast out people with disabilities, he decided to help them and found his calling.

“I knew from that moment that yeah, I wanted to play sports and all this stuff, but I knew that my purpose was to fight for people who can’t fight for themselves,” he said.

In 2010 he founded the Tim Tebow Foundation “with a mission to bring Faith, Hope and Love to those needing a brighter day in their darkest hour of need,” the website reads. The charity also includes hospitals, playrooms and orphanages.

This year, Night to Shine is expected to see the participation of over 700 churches around the world as the event celebrates its sixth anniversary on Friday.

Tebow cheered every guest on the red carpet and danced tirelessly with any willing partner. On Jan. 20, he married the winner of the 2017 Miss Universe contest, Demi-Leigh Nel-Peters, and the couple left their honeymoon to visit Rome and attend the prom night.

It was the couple’s first visit to Rome and the Colosseum made an impression on the athlete, who said he was saddened by the thought of the persecution and inequality the millenary amphitheater witnessed through the ages.

“Still, in a different way, we are fighting to this day,” he said, remembering last year’s edition of Night to Shine in the Eastern European country of Albania, at which he found out some people with special needs hadn’t left their homes in over a decade due to the stigma associated with disabilities.

According to the communications officer of the Pontifical Academy for Life, Fabrizio Mastrofini, many questions regarding how our society values, supports and caters to people with special needs remain unanswered.

The Vatican department, under Pope Francis, has adopted a more holistic approach to the protection of life, which is not limited to the hot-button issues and instead encompasses every aspect and stage of human existence, from migration to the environment.

“This initiative demonstrates that the line taken by the Pontifical Academy for Life is correct, very correct,” he told RNS at the event. “We must cater to all dimensions of human life, not just at birth, not just end-of-life, but everything in between.”

For Massimo Ciccotti, a young man with Down syndrome, the event was all about having fun and feeling like a celebrity.

“It’s a beautiful party with a lot of music and with many people! To be here makes me feel like, well, a character from the Avengers!” he said, pointing to his name tag, on which he had written the name of the Iron Man superhero “Tony Stark.”

“I love this evening; I want to celebrate my birthday like this!” he said.