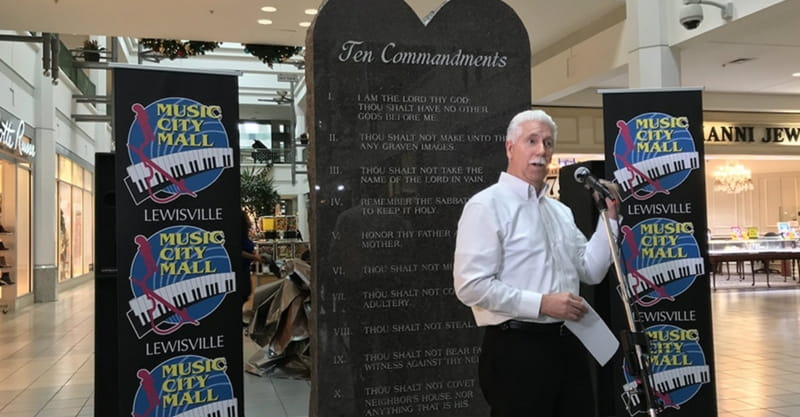 But when an 800-pound granite tablet engraved with “Thou shalts” and “Thou shalt nots” went up in a suburban Dallas shopping mall just before New Year’s, not a protester was in sight.

“We’re not trying to make a statement or create a controversy,” Richard Morton, general manager of the Music City Mall at Vista Ridge, told Texas reporters Friday(Dec. 29) as the block was unveiled. Instead, he said, the monument reflects the mall owner’s “belief system and he is not afraid to share it.”

The owner is John Bushman, a former Marine and businessman from Odessa, Texas, who has said he hopes people find “peace and love” in the Ten Commandments. A second granite tablet bearing two of what Bushman has called “the greatest commandments” — to love the Lord and thy neighbor — is on the second floor.

Several of Bushman’s other businesses, including hotels and casual dining restaurants in Texas, Colorado and New Mexico, have similar Ten Commandment displays. He has told Dallas media he wants the Music City Mall to be “a community space.”

A shopping mall operates like a public, community space where all are welcome. But it is actually a private space where church-state laws demanding a neutrality toward religion don’t apply.

Local non-Christians have, so far, not objected publicly. Dallas is among the most Christian U.S. cities, with a population that is 78 percent Christian and with 18 percent who claim to have no religious affiliation, according to the Pew Research Center. Adherents of non-Christian faiths make up just 4 percent of Dallas-area residents.

But the tablets have inspired numerous comments on the blogosphere. Hemant Mehta, an atheist author and advocate with the popular Friendly Atheist blog, wrote of owner Bushman: “He would’ve been better off just putting up a sign saying ‘Thou shalt not steal’ and leaving it at that. Instead, he used his faith to create a spectacle, to drum up publicity, to make more money. Just like Jesus wanted.”

Gary Randall, who writes for the blog Faith and Freedom, praised the monument. “(I)t is the basis for the legal system in America, the most free, prosperous, blessed and exceptional nation in the history of the world, even though secularists claim the Commandments are ‘not’ the basis for our laws,” he wrote.

Some local shoppers say they love the monument. “I think it’s great, I’m excited,” Colette Franklin, a resident of nearby Denton, told Community Impact Newspaper at the unveiling, which kicked off with a Christian prayer. “I think it’s great we can get back to things that we used to have and make people aware of this foundation. We teach these values already to our kids, and this helps to enforce it.”