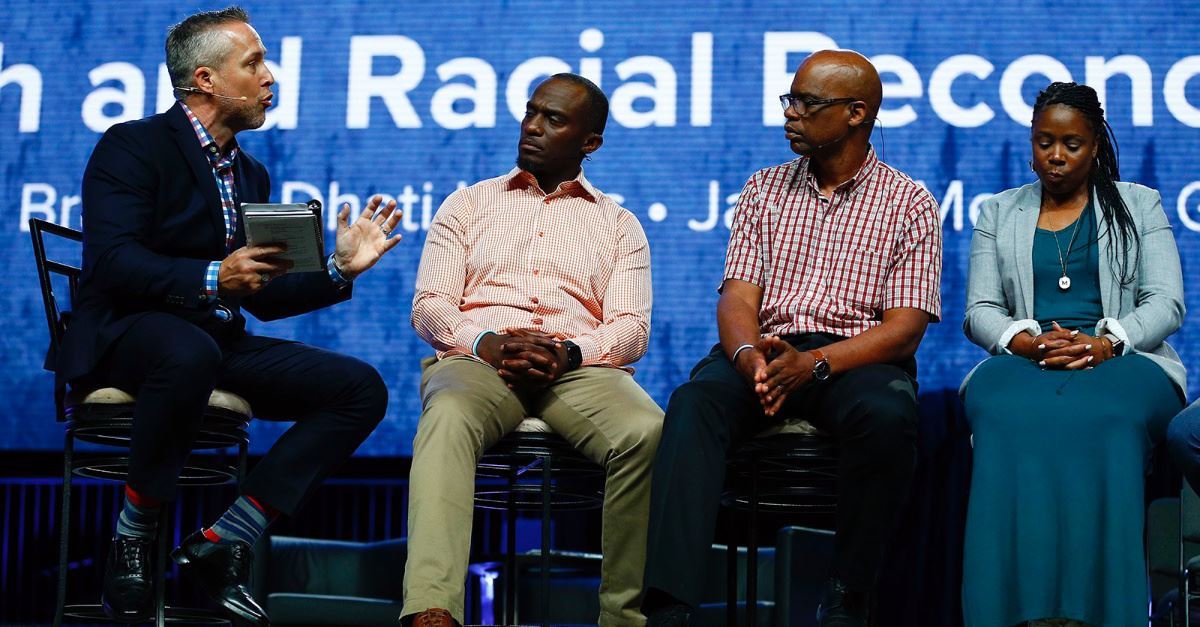 BIRMINGHAM, Ala. (RNS) — At their annual meeting, Southern Baptists re-elected their president, adopted statements on their views about major cultural issues, and discussed how to deal with sexual abuse and racial discrimination in the church.

They also brought to center stage questions about church leadership roles that are appropriate for women in the church.

North Carolina pastor J.D. Greear, who was elected Tuesday (June 11) to a second one-year term as president, had emphasized a “Gospel Above All” theme for the meeting. He said that message was linked to multicultural worship music throughout the meeting and the inclusive approach Baptists took in appointing leaders to the convention’s various committees.

“We’re not where we need to be on those things, but I believe a signal has been sent that we believe that’s where we need to go,” he said at a news conference at the conclusion of the meeting on Wednesday.

“Now it’s on us to take the right steps at the right time and to move in a way that shows that it’s not words or virtue signaling but it’s something that we mean because we believe the Bible teaches it.”

Southern Baptist Theological Seminary President R. Albert Mohler Jr. said that in the past, issues of diversity were usually discussed mostly in hallways among small groups of church delegates, known as messengers. At this meeting, the conversations were held on the main stage of the gathering, which drew more than 8,000 messengers.

Panelists in a Tuesday discussion on racial reconciliation addressed how the issue affects both local congregations and the larger church. A pastor on the panel mentioned how a church member left his congregation when the congregant disagreed with the minister’s support of Baptists’ vote several years ago to repudiate the Confederate flag. Another mentioned how people of color are not likely to get to executive meeting rooms until they are in the same dining rooms with influential white leaders.

“It was definitely a different convention,” said Mohler. “There were more women’s voices and, by intentionality, more voices from African Americans and others who we very much want to be a part of the future of the Southern Baptist Convention.”

Pastor Dwight McKissic, a Texas minister who has advocated for more minorities and women to be placed in positions of leadership, agreed the issue of inclusion was highlighted at the meeting.

“It was clearly a move in that direction, stronger than I’ve ever seen, and I welcomed it and celebrate it,” he said.

Still, McKissic was concerned about a lack of diversity in the leadership of major Southern Baptist entities. He noted that the trustee chairman of New Orleans Baptist Theological Seminary told messengers the search committee had considered several minority candidates when hiring a new president. But McKissic was disappointed that the board chair of the Executive Committee declined to be as forthcoming about details of its recent hiring process for a new president.

Abuse victim advocates noted the many actions Southern Baptists took on the abuse issue — including the introduction of “Caring Well” handbooks and video resources. But they still urged the convention to set up a database to help track abusers and keep them from moving from church to church.

“A clergy database must be established, documenting confessed, convicted or credibly accused abusers,” said advocate Cheryl Summers at a rally she organized outside the Birmingham-Jefferson Convention Complex on Tuesday. “We have seen some progress, but there is a lot more work to be done.”

On Wednesday, Baptists also passed resolutions, nonbinding statements that give a sense of the views of those gathered for the annual meeting. They included:

* Urging the Supreme Court to overturn the 1973 Roe v. Wade decision that legalized abortion and celebrating “recent bipartisan gains in state legislatures that restrict abortion.”
* Calling the U.S. government to make religious liberty “a top priority of American foreign policy in its engagement with North Korea and China.”
* Recognizing critical race theory and intersectionality as “analytical tools” but repudiating their misuse.
* Urging the president and Congress to not include women in the Selective Service military registration, “which would be to act against the plain testimony of Scripture and nature.”
* Affirming their “commitment to Christ comes before commitment to any political party.