Some Question Replacing Mississippi's Confederate Symbol with 'In God We Trust' 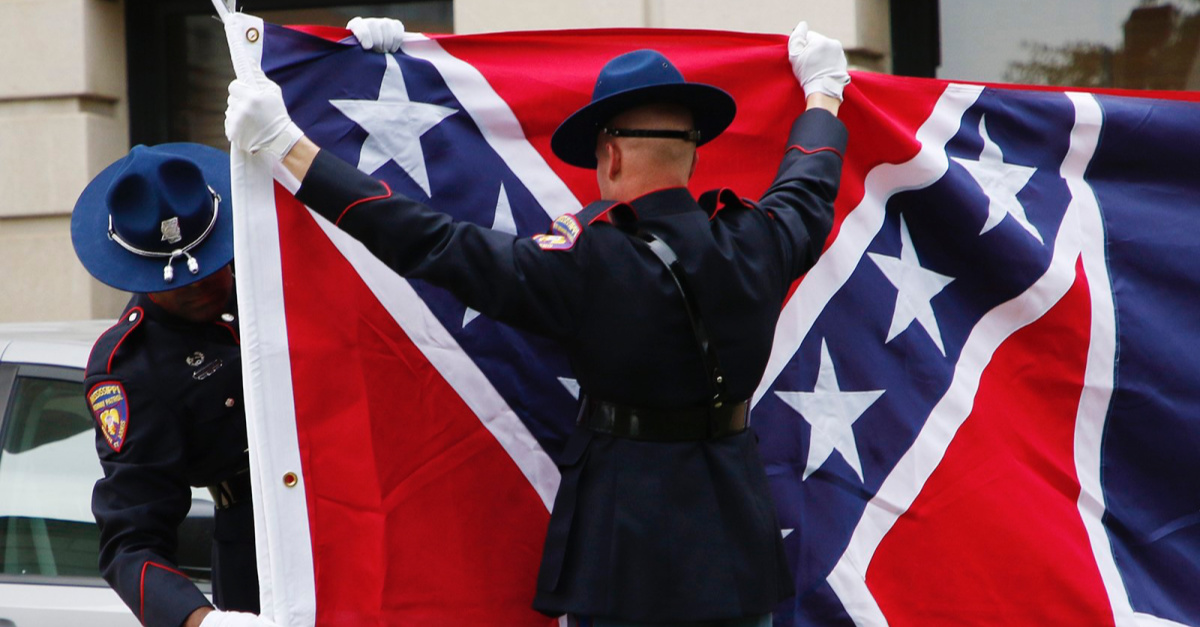 Some Question Replacing Mississippi's Confederate Symbol with 'In God We Trust'

(RNS) — The Rev. Isiac Jackson Jr. was one of many Mississippi residents who took it as a spiritual victory when the state’s lawmakers voted Sunday (June 28) to remove the Confederate symbol from the state’s flag.

“God answers prayer,” said Jackson, president of the General Missionary Baptist State Convention. “He may not come when you want him, but he’s always on time.”

Jackson was one of many Black faith leaders who had spoken out against the flag, which was adopted in 1894 as Mississippi’s whites tried to consolidate political power after Reconstruction. The bill’s passage, and Republican Gov. Tate Reeves’ signature two days later, closes the door on a debate that has long frustrated African Americans, who make up 37.8% of Mississippi’s population, the largest percentage of any state.

“Black folks in the state of Mississippi have been praying for the removal of that flag for over a hundred years,” he said of the former banner. “God fixed the hearts of former slaveowners’ children to bow to the will of God and remove that flag.”

But tucked inside the legislation changing the flag was a peculiar mandate. “The new design for the Mississippi state flag recommended by the commission shall not include the design of the Confederate flag, but shall include the words ‘In God We Trust,’” the act reads.

Requiring the phrase has drawn a range of reactions, with politicians and faith leaders arguing that it is unifying and watchdog groups seeing it as evidence of Christian nationalism.

“It is my personal belief that it is time for us to change our state flag to reflect the love, compassion and conviction of our people,” Fitch said when she proposed its inclusion in the bill, according to The Associated Press. “The addition of ‘In God We Trust’ from our state seal is the perfect way to demonstrate to all who we are.”

The state seal of Mississippi has included the phrase “In God We Trust” since 2014, when it was bundled within the passage of a religious freedom bill.

“In God We Trust” has also been quietly added to a popular contender for the flag’s new design known as the “Hospitality flag” — a large star surrounded by 19 smaller stars to represent Mississippi’s history as the 20th state to join the union.

Black politicians, such as Mayor George Flaggs of Vicksburg, Mississippi, have also backed versions of the flag featuring the phrase.

“I join former Mississippi Governor Phil Bryant, United States Senator Roger Wicker and a host of others who have endorsed the red, white and blue ‘In God We Trust’ flag for the State of Mississippi,” Flaggs said in a statement, according to Mississippi NBC affiliate WLBT. “I believe this flag option will bring our state together like never before and continue the forward momentum we’ve seen in recent days.”

However, the suggestion that the new flag say “In God We Trust” worried some advocates and watchdog groups outside of Mississippi, who see the phrase often invoked by conservative activists and lawmakers aligned with Christian nationalism.

Americans United for the Separation of Church and State decried the inclusion of the phrase on Thursday, characterizing it as trading “a white nationalist symbol for a Christian nationalist one.”

“Mississippians practice a variety of religions and faiths, and one in four identify as nonreligious,” Sam Sokol, a policy advocate at Americans United, wrote in a blog post. “Our state flags are powerful symbols, so they should represent our shared values and the diversity of our communities.”

Sokol also noted that pushing for “In God We Trust” displays on license plates and in public schools is a core goal of Project Blitz, a legislative agenda developed by a collection of Christian groups that are sometimes described as Christian nationalist.

Andrew Whitehead, a sociologist at Clemson University and co-author of “Taking America Back for God: Christian Nationalism in the United States,” said the phrase, which was adopted as the United States motto in 1956 during the early days of the Cold War, has cropped up throughout American history during times of social upheaval.

“Especially white Americans and white Christians, when they hear ‘In God We Trust’ they kind of idealize this connection between United States and a covenant with the Christian God. They’re really kind of saying that this country belongs to a certain (group), and really what they’re saying is it belongs to white Protestant people,” said Whitehead.

Faith leaders in Mississippi celebrated the inclusion of the phrase on the flag. Shawn Parker, executive director of the Mississippi Baptist Convention Board, said religious Mississippians are likely to welcome its presence on the state banner.

“As a whole, Mississippi Baptists would be pleased with the presence of ‘In God We Trust’ on the flag, and would consider it a fair representation of who we are as a state in Mississippi,” said Parker, whose group pushed the Legislature to remove the Confederate symbol from the flag in June.

Parker pointed to the state’s deeply religious nature: As of 2016, Mississippi was tied for first place in terms of religiosity alongside Alabama, according to Pew Research.

Jackson, too, called it “a good phrase.” But he argued that the value of “In God We Trust” depends greatly on its interpretation.

He added: “Black folks, we’ve always been trusting God — that’s all we’ve had.”