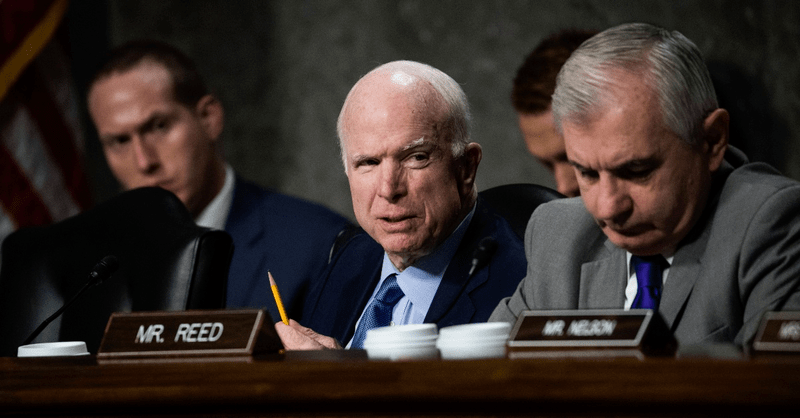 On Friday, Sen. John McCain announced that he has decided to cease treatment for the aggressive brain cancer he has been battling for over a year.

The family issued a statement on Aug. 24, announcing McCain’s decision saying, “Last summer, Senator John McCain shared with Americans the news our family already knew: he had been diagnosed with an aggressive glioblastoma, and the prognosis was serious. In the year since, John has surpassed expectations for his survival. But the progress of disease and the inexorable advance of age render their verdict. With his usual strength of will, he has now chosen to discontinue medical treatment,"

The statement continued saying, "Our family is immensely grateful for the support and kindness of all his caregivers over the last year, and for the continuing outpouring of concern and affection from John's many friends and associates, and the many thousands of people who are keeping him in their prayers. God bless and thank you all."

After making this announcement, many took to social media creating a moment of nonpartisan support for the senator and his family.

On Twitter McCain’s wife Cindy wrote, "I love my husband with all of my heart. God bless everyone who has cared for my husband along this journey." The senator's daughter, Meghan McCain, who has been very public with her father’s battle over the past year, wrote on twitter, "My family is deeply appreciative of all the love and generosity you have shown us during this past year. Thank you for all your continued support and prayers. We could not have made it this far without you - you've given us strength to carry on."

Others who voiced support included U.S. Representative Elijah Cummings of Maryland (D-MD). Cummings wrote, “Senator John McCain has always been a fighter, a patriot, and a dedicated father and husband. I want to extend my thoughts and prayers to him and his family, and I wish him nothing but the best. I know his courageous spirit will lead him.”

House Speaker Paul Ryan tweeted, "The whole House is keeping John and his family in our prayers during this time."

Virginia Senator Tim Kaine (D-VA) tweeted, “They just don't make 'em like John McCain anymore. For 60 years, he has served our country. As a man in uniform. As a maverick leader always seeking common ground. As a committee chairman dedicating his work to serving our troops and veterans. We love you, John. We're with you.”

CNN reports that McCain has not been in Washington since December but has continued to use his voice.