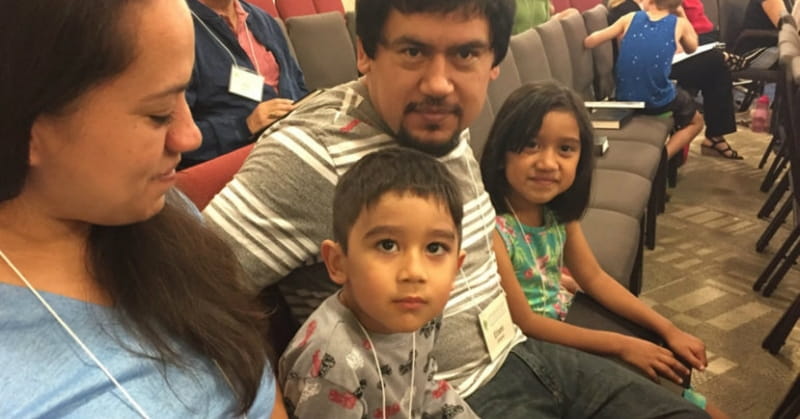 The church covenant makes it clear: The congregation is to be “a safe haven, free from the fear of judgment, where wounds are healed, differences are celebrated and inclusivity is intentional.”

Eighteen years ago, when they wrote that covenant, members of Umstead Park United Church of Christ might not have imagined that “safe haven” might also mean a place of sanctuary where a 39-year-old Mexican immigrant would take refuge from the immediate threat of deportation.

But in hindsight, that covenant clause seems prophetic.

This congregation of 300 members has become the first church in Raleigh to convert part of its space into a bedroom. Three other religious communities in North Carolina have done so since May, and another five churches in the state are getting ready to vote on inviting immigrant families into their midst.

Across the nation, 32 congregations — the vast majority Protestant churches — are housing people at risk of deportation, according to Church World Service, which is tracking the development.

While not exactly a groundswell, such faith-based resistance to immigration policy has not been seen since the 1980s, when hundreds of churches and synagogues extended sanctuary to people fleeing civil wars in El Salvador and Guatemala.

And it is testing how far the Trump administration is willing to take its tough line on immigration: Will law enforcement be sent into houses of worship against the will of congregants motivated by sincere beliefs — and despite the president’s stated commitment to religious freedom?

Could our pastor get arrested?

Umstead Park welcomed Eliseo Jimenez of Greensboro, N.C., on Oct. 9. An itinerant laborer who worked in the state’s tobacco fields in the 1990s and later in construction laying floors, Jimenez ran out of time.

For the past five years he has reported yearly to U.S. Immigration and Customs Enforcement in Charlotte and received a work permit. This past summer, the federal agency told him it would not extend his permit and ordered to him leave the country by July 31.

Jimenez, who has four children including a 4-year-old boy and 5-year-old girl, has been living in the U.S. for most of his life — 22 years — and is his family’s primary breadwinner.

“These people aren’t hardened criminals. It’s not what the government would have us believe — that they’re deporting people that are bad people. Eliseo is a fine person who wants to provide for his family. It’s a broken system we live in.”

For these churches, resisting an immigration system, which under President Trump has ramped up enforcement and detention, has become one way to counter the politics of the day.

“It’s a spiritual act, but it has political implications,” said the Rev. Doug Long, the church’s pastor. “It’s who we are. It’s what we said when we wrote our covenant 18 years ago: This is a place of refuge.”

Most churches that become sanctuary congregations spend months debating whether to do it.

In the case of Umstead Park UCC, the process moved fairly quickly.

A young, mostly white congregation with a large number of LGBTQ members, Umstead Park has long been committed to progressive social values. It shares a green-certified building with an architectural design firm in an office park off U.S. 70. Its pastor was arrested in Moral Monday demonstrations protesting the Republican-led policies of the North Carolina Legislature. And after Trump’s election, and the ill-fated rollout of the first travel ban, the church began to watch immigration issues more closely.

In July, the church formed a 10-member committee to study the issue. It met with a congregation 76 miles away in Greensboro that had already extended sanctuary to an undocumented person, and researched a host of legal issues. Members grappled with tough questions:

After considering all sides of the issues to most members’ satisfaction, the committee recommended that the church forge ahead. On the last Sunday in September, members voted in a secret ballot, 89-5, to invite an undocumented person needing sanctuary.

The easy part was over.

The congregation now turned its attention to finding the right immigrant to take in and called on a local advocacy organization, Alerta Migratoria NC, for referrals.

The congregation wanted someone who might present a judge with a compelling legal case for staying or squashing his or her deportation order.

Jimenez fit the bill. He had a lawyer and a legal strategy dating back to 2007, when he was pulled over for a broken taillight and arrested under a program that allows sheriff’s deputies to identify undocumented immigrants and hand them over to ICE. While in detention he was forced to sign his own deportation order. His lawyer maintains this was a violation of his Fourth Amendment due-process rights.

After spending a month in Mexico, Jimenez returned to the U.S. His only other arrest came in 2013, when the police picked him up for driving what they said was a stolen vehicle. It turned out the vehicle was his roommate’s, and, after prolonged jail time for Jimenez, the district attorney dismissed the charges. Eliseo Jimenez and his family participate in a church service at Umstead Park United Church of Christ in Raleigh, N.C. From left, Gabriela, Christopher, Eliseo and Alison. RNS photo by Yonat Shimron

Like millions of other undocumented immigrants, Jimenez wants to stay in the U.S. to care for his family. His youngest children, Alison and Christopher, need him, as does his partner, Gabriela, who is struggling to support the family single-handedly preparing tacos on a food truck in Greensboro.

“I would like to stay with my family — give them a better life than the one I have and be with them,” he said. “That’s the most important thing.”

Since taking sanctuary in a youth activity room, which the church turned into a bedroom, Jimenez has busied himself with various handyman tasks around the building, touching up paint, fixing kitchen cabinets. One Sunday he helped break down display tables in the lobby — not for pay but as a way of keeping busy. Mostly he spends his days talking on his cellphone with family and friends. And he waits.

‘They’re there to be a witness’

The decision to offer Jimenez sanctuary was not the end of the process, but the beginning.

Becoming a sanctuary church requires daily oversight and a fleet of volunteers.

For one thing, the church requires a volunteer, called a “host,” to sit in the church lobby 24/7, so that if immigration officers come knocking, the person in sanctuary is not the one to answer the door.

In addition to its own members, Umstead Park reached out to five local congregations, including a Jewish synagogue, to help provide hosts. Those nonmembers make up about 30 percent of the volunteer force.

All hosts must pass a background check and attend a training session.

If an ICE officer shows up at the door, the host is to ask to see a warrant signed by a judge. If an arrest is made, they’re to document it, preferably with their phone’s video camera.

“We’ve trained them to mentally rehearse what that would look like and how to interact in a nonthreatening way,” said Bridget Blinn-Spears, a church member and an employment lawyer who leads the training. “They’re really there to be a witness. They’ve thought about how to stay calm and respectful and engage with (ICE) appropriately.”

Besides the hosts, the church needs what it calls “helpers,” people who can wash Jimenez’s clothes (the church has no washing machine) and buy him groceries. Three times a week, a helper brings a cooked evening meal.

And then it needs advocates. Sanctuary is not a solution; it’s intended to be a halfway measure that calls attention to the person and agitates for a legal resolution. That means the church needs to sustain a publicity campaign on behalf of Jimenez — in the media and among elected officials.

“We’re trying to get that story in front of people who have policy-making influence,” said Blinn-Spears. “None of these cases are sure things and they’re very hard to win, regardless.”

Across the U.S., at least three people living in sanctuary have been able to leave the churches where they took refuge after their deportation orders were rescinded, including Minerva Garcia, a woman who lived in a Greensboro UCC church for three months.

That’s a lot of work for a small church, especially one with middle-aged working adults. But members insist it hasn’t been a burden.

“It’s added energy to the church,” said Tricia Andrews, a stay-at-home mom and a church member who volunteers as a host. “I’m really proud we’re doing this. We’re not just talking the talk; we’re walking the walk. To me, it’s the good Samaritan story.”

Sarah Sydney, who earlier in her life overstayed her tourist visa to Italy for six years, said she feels a special bond with undocumented people. When it’s her turn to serve as host she brings her two boys and, when Jimenez’s children are visiting, the four play together.

“They adore Eliseo’s children,” Sydney said. “Our family gets so much out of it. The volunteering has been a fulfilling and wonderful experience.”

Umstead Park does not believe it is breaking the law in offering sanctuary.

Some lawyers might disagree. But a few things are clear:

Federal law doesn’t recognize the concept of “sanctuary” in a place of worship. But churches — along with schools and hospitals — are considered “sensitive locations,” meaning that federal immigration enforcement officers will avoid arresting, searching or interviewing people there under most circumstances.

The one area government authorities have not allowed is transporting undocumented immigrants from one place to another.

To avoid the perception that it was hiding Jimenez, the church held a news conference on Oct. 9, the day he entered sanctuary. It also informed ICE of his whereabouts.

The church hasn’t had any problems with law enforcement, though a zoning officer did inquire about the church providing a residential living space. (An obscure zoning rule allows churches to provide temporary accommodations.)

But in recent months, the Trump administration has also begun testing the “sensitive locations” policy — at least as it applies to hospitals.

Last month, a 10-year-old undocumented girl who was traveling by ambulance to a hospital in Texas was stopped by Border Patrol agents who then trailed her to the hospital, guarded her during gallbladder surgery and then took her into custody. She was released 10 days later after a national outcry.

“We are hoping and praying that the administration continues to respect churches’ ability to offer sanctuary, and if they don’t, we’re prepared to be the first church where they decide not to,” said Blinn-Spears.

So far, offering sanctuary to Jimenez has united the church and opened it up to a new constituency: Hispanics.

North Carolina, with 338,000 undocumented immigrants, has the fastest-growing immigrant population in the country, according to the 2010 census data.

Doug Long, left, pastor of Umstead Park United Church of Christ in Raleigh, N.C., stands next to Eliseo Jimenez, who is taking sanctuary there. RNS photo by Yonat Shimron

Some of them now see Umstead Park as a safe place.

“They’ve come and been among us and celebrated the fact that he is here and felt some camaraderie and hopefulness,” said Long, the pastor.

Jimenez is grateful, too.

“There are not too many churches in North Carolina that can offer sanctuary to people like me,” he said. “Some churches are afraid of legal issues. If more people know there are places like this church that can help us, it will be beneficial for everybody, especially for the kids.”

But neither Jimenez nor the church knows what lies ahead. For now, both are waiting and praying for the best.

Photo: Eliseo Jimenez and his family participate in a church service at Umstead Park United Church of Christ in Raleigh, N.C. From left, Gabriela, Christopher, Eliseo and Alison.