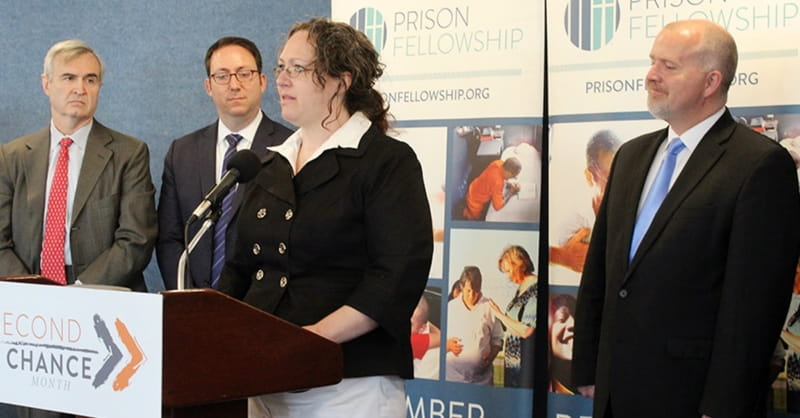 A national prison ministry is joining forces with conservative and liberal groups to call on church leaders and politicians to give former prisoners a second chance at normal lives.

“We believe people with a past can rise from their failure, repay their debt and restore and heal our communities that are affected by crime,” said Craig DeRoche, senior vice president of Prison Fellowship, as he launched the first “Second Chance Month.”

“There is no such thing as a throwaway person and by granting second chances to those who have earned them we will be contributing to the restoration of families, communities and our nation.”

Speaking Thursday (March 30) at the National Press Club, DeRoche and representatives of the NAACP, the Heritage Foundation, the American Civil Liberties Union and Koch Industries called for a reduction in the more than 48,000 statutes that limit the rights of people with a criminal record.

About 65 million Americans – or 1 in 4 adults – have a criminal record that can lead to reduced access to jobs and education and a restriction from voting.

Casey Irwin, a former prisoner who served time for drug possession and assaulting a police officer, spoke at the news conference about how ministries helped her with job leads, housing and transportation.

DeRoche, a former Minnesota House speaker with a criminal record due to an alcohol addiction, said Prison Fellowship will mark the month with 5K runs in Denver and St. Paul, Minn.

“Churches will host Second Chance Sundays to share the message of redemption and pray for the families impacted by crime,” he said.

More than 50 organizations are partnering with Prison Fellowship, the nation’s largest outreach to prisoners, including Bread for the World, Catholic Charities, Christian Legal Society and the Faith and Freedom Coalition.

Photo: Casey Irwin, a formerly incarcerated woman from Minnesota, speaks at the launch of the first “Second Chance Month” in Washington, D.C., on March 30, 2017.