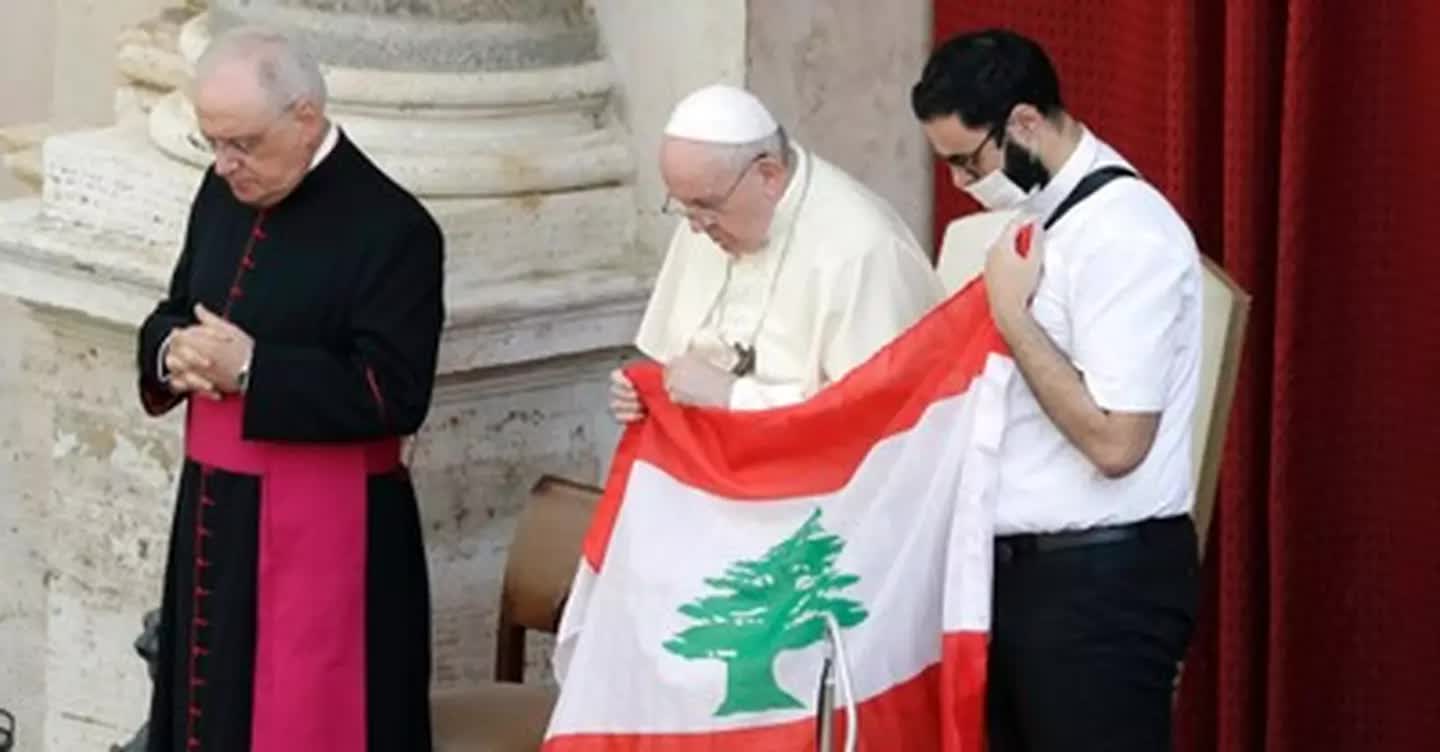 VATICAN CITY (RNS) — Standing beside a waving Lebanese flag, Pope Francis paid homage to the troubled population of Beirut on Wednesday (Sept. 2) and implored its residents to “take courage” as they begin the reconstruction of their city.

“I encourage all Lebanese to continue hoping and finding the strength and energy that are necessary to restart,” Francis said in the courtyard of the Vatican’s Apostolic Palace, during his first public audience since the beginning of the pandemic in Italy.

“I ask politicians and religious leaders to commit with sincerity and transparency to the reconstruction work, setting aside partial interests and looking at the common good and future of the nation,” he added.

On Aug. 4 a powerful explosion in Beirut destroyed the city’s port and killed more than 100 people, leaving many more injured. The blast wreaked havoc on the tenuous fabric of the Lebanese society, allowing sectarian interests to resurface in a country marred by civil unrest and a financial crisis.

This is the pope’s second appeal for the struggling Middle Eastern nation since the explosion. During his Angelus prayer Aug. 9, Francis asked that Lebanese people and the entire international community work together “for the common good of this beloved country.”

A priest from the Lebanese congregation of Maronite missionaries, the Rev. Georges Breidi, who studies at the Pontifical Gregorian University in Rome, held up the Lebanese flag next to Pope Francis, who kissed it before making his appeal for peace and reconstruction.

“For over a hundred years, Lebanon has been a country of hope,” he said. “Even in the darkest times of its history, the Lebanese people held on to their faith in God and proved their ability to make their land a place of tolerance, respect, conviviality that is unique in the region.”

The pope quoted his predecessor, St. John Paul II, who in a letter sent to Catholic bishops in Lebanon in 1989 asked that the country “not be abandoned to solitude.” Francis praised Lebanon as a model of peaceful cohabitation between different backgrounds and religions and asked that this legacy not be abandoned.

“I address the inhabitants of Beirut, severely tried by the explosion: Take courage, brothers! Faith and prayer are your strength. Do not abandon your home and your legacy. Do not allow the dream of those who believed in the future of a beautiful and prosperous country to fail,” he said.

He also asked once again that the international community come together to help the country as it emerges from a deep crisis, without getting enveloped in the fraught tensions in the region.

Clergy have a key role to play in this context by accompanying the Lebanese faithful through this difficult time, Francis said.

“To you, bishops and priests, I ask apostolic zeal; I ask for poverty — no luxuries — poverty alongside your poor people who are suffering. It’s up to you to offer an example of poverty and humility,” he said.

Drawing from the teachings of his namesake, St. Francis of Asissi, the pope emphasized the importance of interfaith cooperation.

Only if Catholics are willing to work with the people “in a spirit of fraternity among all the religious traditions that exists in Lebanon” will they be able to offer a fruitful contribution to the country and the Arab world, he said.

To promote this fraternity, Pope Francis called for a day of fasting and prayer on Friday and invited all religious communities and minorities to take part. He also announced he will be sending his right-hand man, Vatican Secretary of State Cardinal Pietro Parolin, to Lebanon on that day “to express my closeness and solidarity.”

Before asking for a moment of silence for Lebanon, the pope entrusted the country to the intercession of the Virgin Mary “so that the Land of Cedars may flourish and diffuse the perfume of living together in all of the Middle Eastern region.”