Pastor in Nepal Re-Arrested on New Series of Charges to Keep Him in Jail, Sources Say 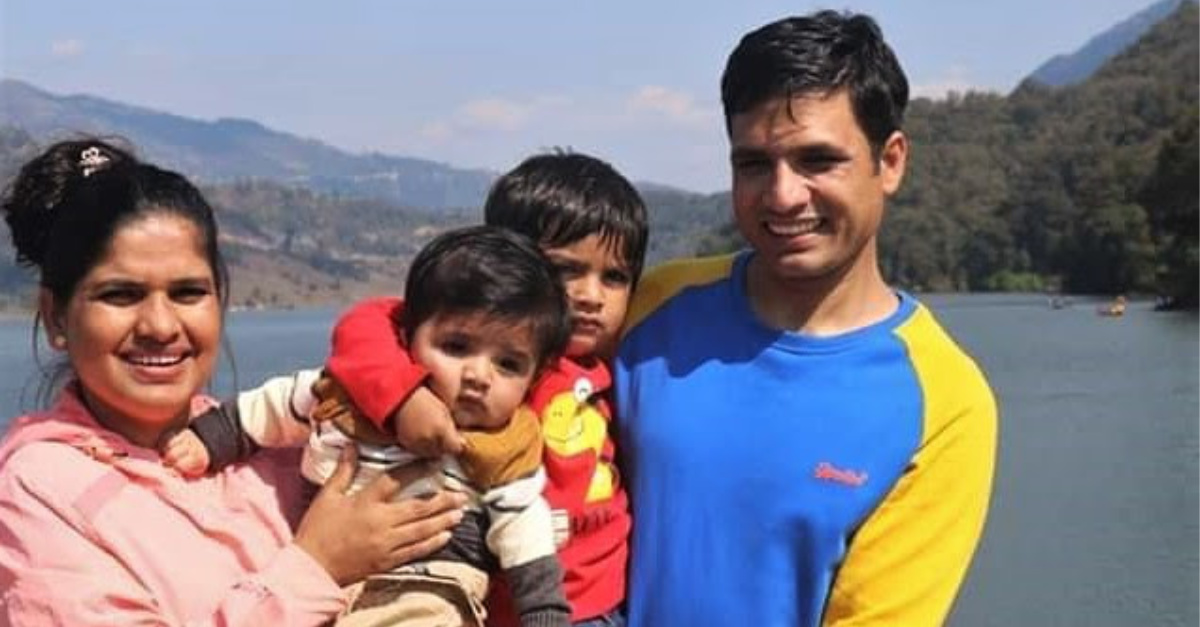 Pastor in Nepal Re-Arrested on New Series of Charges to Keep Him in Jail, Sources Say

HYDERABAD, India, May 15, 2020 (Morning Star News) – A pastor arrested in Nepal in March on charges of giving false information for saying prayer could heal COVID-19 was released last month – and then immediately re-arrested on new charges, sources said.

Moments after releasing pastor Keshab Raj Acharya on bail on April 8, police re-arrested him on charges of “outraging religious feelings” and “proselytizing,” according to court documents. Christian leaders in the Himalayan country and rights advocates said the charges violate a freedom of religion agreement to which Nepal is a signatory.

Overjoyed, she quickly thanked him and rushed into the main office, where she paid the amount and received a receipt, she said.

“I was happy that my husband was finally returning home. But the moment we both stepped out of the district jail gate, a police officer came running after us,” Acharya told Morning Star News. “He told me that I cannot take my husband home.”

Another police officer followed, seizing her husband’s hands and handcuffing him, she said. When she protested, the officer said they were not arresting him but only taking him to the police station so he could collect some items deposited there when he was taken into custody, she said.

“The police lied to us,” Junu Acharya told Morning Star News. “My husband was taken inside the Kaski police station, and they did not allow us to meet him. There I had found out that another case, this one about religious matters, was lodged against him.”

Officers told her that they had received orders from higher officials to re-arrest him, she said. They rejected her many pleas to be allowed to see him.

“Later I came to know that they had conducted COVID-19 tests on him and that he was kept isolated for a while,” Acharya said.

Kaski police filed the charges of outraging religious feelings and proselytizing. The Kaski District judge set an exorbitant bail of 500,000 Nepalese rupees (US$4,084), his wife said.

“It is huge amount. I borrowed something over 150,000 Nepalese rupees [US$1,225] from some kind-hearted persons to be able to afford a lawyer,” she said. “I do not have even money to feed my children.”

With her husband incarcerated throughout the COVID-19 lockdown, she and her children have survived on 20,000 Nepalese rupees (US$163) given by a pastor friend since Pastor Acharya’s March 23 arrest, she said.

“It has been 52 days now,” Junu Acharya said. “Three police stations have registered cases against him. They are ensuring that he would be tried for each case, one after the other, so that there will not be any possibility of releasing him on bail.”

The monthly rent on the church’s property is now overdue, she said.

“I do not know how to arrange 100,000 Nepalese rupees [US$817] to pay the rent,” she said. “I met the property owners and tried explain to them our situation, but they said to pay at least half of the rent in a week. If we fail to pay the rent, we will have to vacate the property.”

“The bail amount ordered in Pastor Keshab Acharya’s case is enormous, disproportionate to penalties under both the sections put together,” he said.

Initially Junu Acharya had received a phone call from the district jail on April 8 that she was to deposit 70,000 Nepalese Rupee (US$571) for bail for the March 23 arrest on the charge of misleading the public by posting false information on social media, she said.

Nepalese Police cited a video showing Pastor Acharya, of Abundant Harvest Church in Pokhara, calling the coronavirus an evil spirit and rebuking it in the name of Christ.

Pastor Acharya was in Kaski District Jail until Thursday (May 14), when he was taken to Dolpa District, a remote area difficult to access, according to the Nepal Christian Society.
“Once again, the police unjustly handed on another arrest note produced from Dolpa District, one of the remotest, hilly districts in Karnali Province, with no access of wheel-transportation,” the Nepal Christian society noted in a press statement. “And without letting him have a chance to appeal, the police transferred him overnight, which obviously shows how biased the police are and how the legal system is using the anti-conversion, anti-blasphemy law to sack the minority religious leaders despite constitutional provisions on fundamental rights to freedom of religion or belief according to the Universal Declaration of Human Rights (Article 18), International Covenant on Civil and Political Rights (Article 18) and other international treaties on protection of individual’s human rights without partiality.”

The Nepal Christian Society urged the government of Nepal to take immediate action against the chief of police in Kaski District.

“We also humbly appeal to the National Human Right Commission, the Bar Association of Nepal, the media practitioners and concerned human rights defenders to stand in solidarity against such attempts of human right violations, especially in regards to freedom of religion or belief,” society stated.

After a hearing on April 19, a judge set bail at 500,000 Nepalese rupees (US$4,084) but ordered the pastor to be sent to police custody for the further investigation of another case filed by Dolpa District Police, according to attorney Govinda Bandi.

“Because of this, he will remain in jail,” Bandi informed the Nepal Christian Society. “Even if we deposit the bail amount, he will not be released because of the order of the district court.”

Kaski police took Pastor Acharya to Dolpa at midnight on Tuesday (May 13).

“Dolpa is very far away, and we often hear about human rights violations happening inside the prison there in media,” Junu Acharya told Morning Star News. “Since the police incriminated him in a religious conversions case, the jail authorities in Dolpa can be insensitive towards Pastor Keshab Acharya.”

She was kept from visiting her husband until after the April 19 hearing, she said.

“He spent the first one month in custody in only one pair of clothes,” she said. “He told me to pray that he would not be shifted to Dolpa jail.”

Police efforts to keep Pastor Acharya locked up have created other hardships for her, she said.

“It appears to be a deliberate attempt by both police and some anti-Christian elements to confine my husband,” Junu Acharya said. “I was leaving our 7-month-old son in the care of church members or my sister and was going to the jail or to creditors who might loan me the bail amount. I have not been able to breastfeed him as I am away from home trying all possibilities to get my husband out of these cases.”

Junu Acharya said she fears what might come now that her husband is incarcerated in Dolpa. Their 2-year-old son talks to himself, telling himself that his father will bring him sweets and toys, she said.

“He falls asleep tired of looking out the window and running to the door to check if it is his dad every single time he hears the sound of a motorbike,” Junu Acharya told Morning Star News. “But in his sleep, he calls out to his dad, “Baba, Baba.”

She could not understand why the police were jailing her husband, she said.

“I tried to reach the district superintendent, Dan Bahadur Karki, by phone, but he blocked my number,” she said. “When I told my husband, he told me that this fight is our Lord’s, not ours.”

He told her that as Christians they had to endure such trials sooner or later, she said.

“When I felt discouraged by these sufferings, my husband told me that I am a strong woman of our Lord, and that I should not be shaken by imprisonment or poverty,” she said. “He told me that we should win this battle by our faith alone.”

While Nepal’s new constitution passed in September 2015 establishes it as a secular and democratic republic, its definition of “secular” appears to protect Hinduism and allows others only to worship in their own faiths. Article 26 forbids anyone to “convert a person of one religion to another religion, or disturb the religion of other people.”

Advocacy groups have detected increased enforcement and other anti-Christian efforts as officials seek to placate Hindus incensed that the new constitution did not re-establish a more prominent place for Hinduism.

A landlocked country between the giants of India and China, Nepal is said to be more than 75 percent Hindu and 16 percent Buddhist. Christians are estimated to make up nearly 3 percent of Nepal’s population, and Muslims 4.4 percent.

Legal advocacy group Alliance Defending Freedom’s allied attorney in Nepal said Christians who were once primarily hit with false accusations of “forcible conversion” are now being charged with preaching or speaking about their faith publicly. Article 26 of Nepal’s constitution prohibits religious conversions, he noted.

By criminalizing conversions, Nepal has infringed on the fundamental freedom of religion or belief which is guaranteed not only by its constitution but also secured by several international covenants, according to ADF-International.

“Nepal’s constitution prohibits the attempt of religious conversion,” according to an ADF press statement. “At the same time, Nepal is a signatory to the International Covenant on Civil and Political Rights, an international treaty explicitly protecting freedom of religion and expression.”