Mohler, Prominent Southern Baptist, Will Be Nominated to Lead Denomination 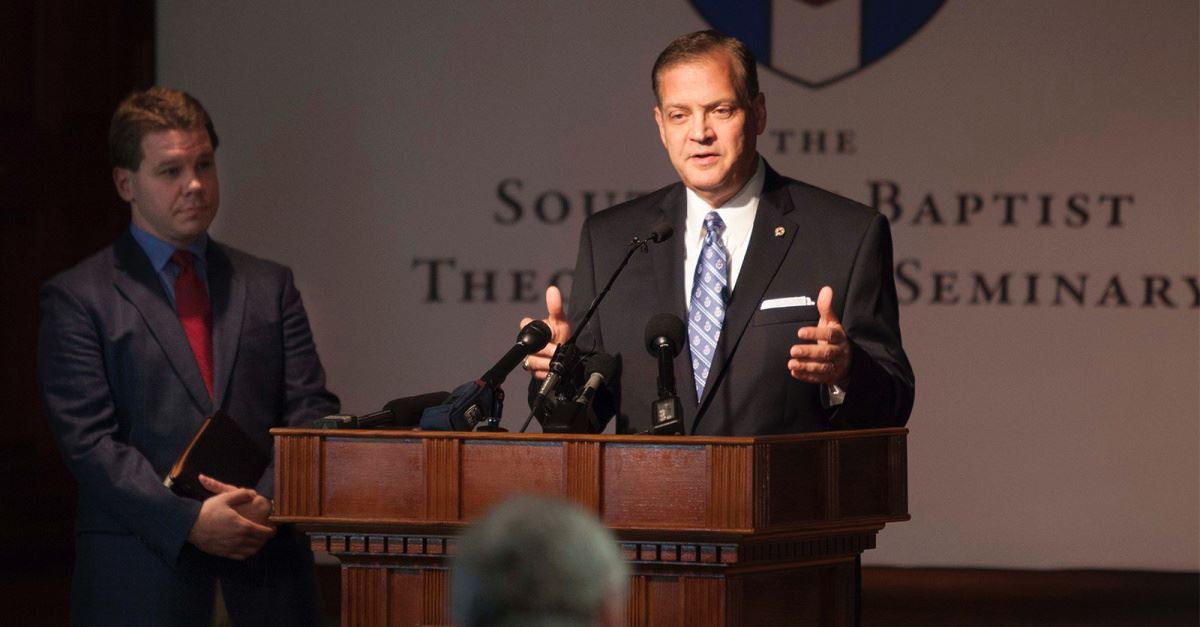 Mohler, Prominent Southern Baptist, Will Be Nominated to Lead Denomination

(RNS) — There are seven more months before the next annual meeting of the Southern Baptist Convention.

But the race for SBC president may already be over, following news that R. Albert Mohler Jr. will likely be nominated to run as the denomination’s next president.

“We need the zeal to mobilize our resources to spread the gospel,” Charles said in making his announcement on Twitter. “We must do so together. I believe @albertmohler is the man to lead us forward in that unity.”

In a statement about his willingness to serve as SBC president, Mohler said he hopes to “unite Southern Baptists,” a group that has long had political and theological divisions within its fold even as it has seen a declining membership as the nation’s largest Protestant denomination.

“We are facing a new era in the world and in the United States, and cultural challenges that will test our conviction,” he said. “We must make clear that we stand without reservation for biblical Christianity and Baptist conviction, and we must stand together.”

But his nomination to succeed the younger J.D. Greear, a megachurch pastor from Durham, North Carolina, now serving a second and final one-year term as president, has puzzled some.

Southern Baptists do not generally begin the campaign for the presidency, a largely ceremonial post, so far in advance of the annual meeting, which will take place in Orlando, Florida, June 9-10, 2020.

“I think it’s to keep others out,” said Wade Burleson, a prominent Enid, Oklahoma, pastor. “Because Al Mohler has come out so far in advance and announced, that might preclude others from running.”

Burleson’s views were corroborated by several other Southern Baptist watchers. Speaking off the record, they said nominating Mohler was a preemptive move intended to block candidates from the denomination’s more zealous “God and country” faction. That group is expected to nominate someone eventually.

But Mohler’s candidacy means they likely won’t choose someone quite so prominent.

Campaigns for the presidency of the nation’s largest Protestant denomination with about 14.8 million members are usually tightly scripted, polite affairs in which populist megachurch pastors are typically chosen. But because 2020 is a U.S. presidential election year, there was a desire among leaders of some of the denomination’s agencies and seminaries to avoid an ugly and potentially divisive battle over President Donald Trump.

Though most Southern Baptists are evangelicals and therefore make up the backbone of the Republican Party, Trump’s presidency had divided some of its leaders who believe it’s unwise to align so publicly with the nation’s president.

Among those who support Trump is Robert Jeffress, pastor of First Baptist Church in Dallas, who has become a fixture on Fox News defending Trump publicly for protecting America as a Christian nation. Other Southern Baptist leaders, such as Russell Moore of the SBC’s Ethics and Religious Liberty Commission, are in the Never Trump camp.

“There’s a tension in the SBC,” said Barry Hankins, professor of history at Baylor University in Waco, Texas. “The rank and file are going to vote for Trump one way or the other. The leadership will argue on it.”

Though not a Never Trumper, Mohler has expressed skepticism about Trump’s moral character as early as 2016. Appearing on CNN shortly after the “Access Hollywood” tape came to light in which Trump is heard bragging about grabbing women’s genitals, Mohler took a sharply critical view.

“When it comes to Donald Trump, evangelicals are going to have to ask a huge question: Is it worth destroying our moral credibility to support someone who is beneath the baseline level of human decency for anyone who should deserve our vote?” Mohler said.

Ironically, Mohler has been close to Jeffress in the past. The Dallas pastor announced plans to nominate Mohler for SBC president in 2008, calling him a “visionary leader.” Mohler later dropped out of the presidential race, citing health concerns.

Mohler has been far more muted on Trump since his election. He is best known in Southern Baptist circles as a leading spokesman for the Reformed or Calvinist wing of the SBC.

He has also recently been more vocal on racial issues. Last year, he oversaw a 71-page report that found that Southern Seminary owned more than 50 slaves and its faculty promulgated the view that slavery was morally correct.

But McKissic, who was instrumental in getting Southern Baptists to repudiate the Confederate flag in a 2016 resolution, said the planned nomination of Mohler could be a step back for the denomination. He said it could become again, despite its new diversity of racial and ethnic groups, one that has been “represented by the good ol’ boy club and where women were in their place, where blacks sat at the kids’ table and if they sat at the grown folk table they had to check all the boxes: Republicanism, Calvinism, that sort of thing, sort of a clone of Al Mohler and that ilk.”

Baptist historian Bill Leonard agreed that Mohler’s “uncompromising orthodoxy” on political, social and theological issues would undergird a candidacy that “would be a reassertion of that orthodoxy.”

Mohler has certainly been a champion of the Southern Baptist position on complementarianism, the view that men and women are created equally but for different roles. But he has also acknowledged that complementarian theology “can and has” led to the abuse of women in the church.

In this sense, he is seen as someone who would continue the work begun by Greear to address sexual abuse within the denomination.

“He’s not rallying around Paige Patterson,” said Hankins, referring to the former seminary president fired for mishandling accusations of sexual assault on women. “He’s saying it’s sin. It needs to be repented. He’s been pretty outspoken.”

Former SBC President Jack Graham, who has been a vocal Trump supporter, said he does not view Mohler as a compromise candidate nor as a leader who will take the SBC back to an earlier time.

“Al Mohler his whole life has been training young people, both men and women, in ministry,” said Graham, pastor of Prestonwood Baptist Church in Plano, Texas. “It would be inaccurate to say that because of Al Mohler’s veteran leadership and status in the SBC that this would be a move back. It’s a move forward.”