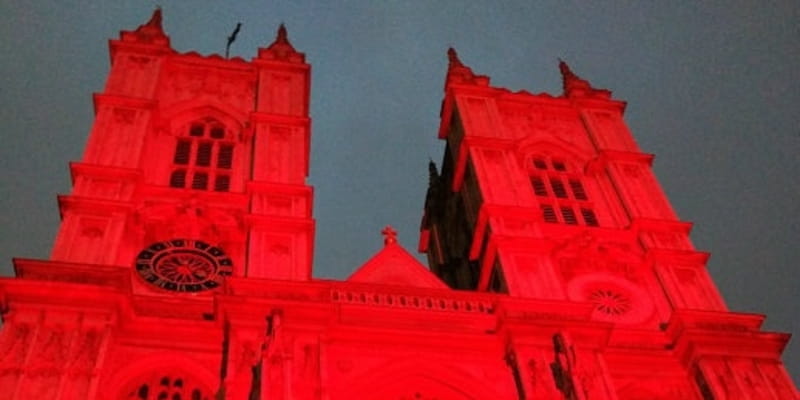 Iconic London landmarks have been floodlit in red this evening (23 Nov.) to raise awareness of people who suffer injustice because of their religion.

The Palace of Westminster, Westminster Abbey and Westminster Catholic Cathedral are currently floodlit to mark Red Wednesday, an initiative by the Catholic charity Aid to the Church in Need to highlight deteriorating religious freedom in many parts of the world.

This morning, Bishop Anba Angaelos of the Coptic Orthodox Church in the UK tweeted a picture of himself outside St George’s Coptic Cathedral in Stevenage. He tweeted: “Symbol of solidarity with those deprived of their religious freedom.”

A parliamentary spokesman said that Parliament “fully endorses” the aims of the Red Wednesday campaign.

Aid to the Church in Need urged members of other faiths to also light their buildings in red, and encouraged school children and students to wear an item of red clothing, and clergy to don red vestments.

The Open Doors annual World Watch List report this year found that religious freedoms are being challenged in many parts of the world, and persecution against Christians is worse than it has ever been in history.

"The persecution of Christians is getting worse, in every region in which we work – and it's getting worse fast," said Lisa Pearce, CEO of the charity.

She added: "The trend is stark, as are the consequences for real people – we should not expect that to change unless we are part of changing the situation."

The Damascus-based Syriac Orthodox Patriach, Ignatius Aphrem II, is due to speak at a service this evening in the piazza outside Westminster Cathedral. He is due to be joined by Sheikh Dr Umar al-Qadri Ameer, the head imam at the Al-Mustafa Islamic Educational and Cultural Centre in Ireland, and Dr. Sarah Bernstein, director-general of the Jerusalem Centre for Jewish-Christian relations.

Tomorrow (24 Nov.), Aid to the Church in Need will launch its 2016 Religious Freedom in the World report, which surveys 196 countries.