Life Lynn, the Baby Whose Mother Declined Chemo to Save Her, Has Died 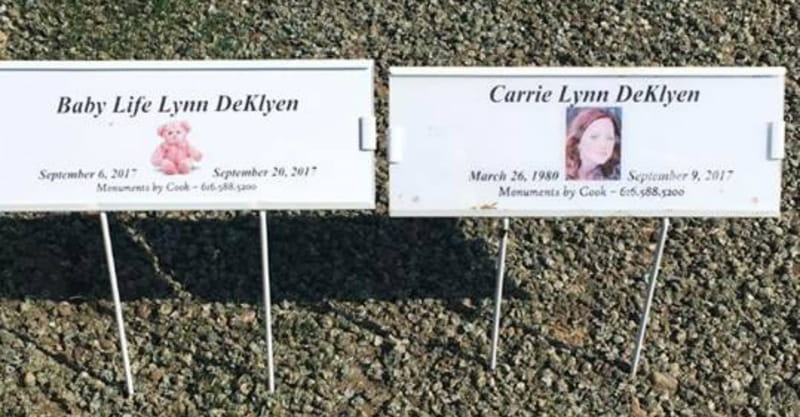 Life Lynn, the Baby Whose Mother Declined Chemo to Save Her, Has Died

The daughter of Carrie Lynn DeKlyen, the pregnant mother who refused chemotherapy, has died, following her mother’s passing.

Last week, ChristianHeadlines.com reported on the sad news that DeKlyen had slipped into a coma and died, following the emergency C-section of her unborn baby girl, who was named Life Lynn.

DeKlyen had decided to refuse chemotherapy treatments following her cancer diagnosis because she was pregnant and wanted to save her baby.

The DeKlyen’s story has taken on an even deeper element of tragedy as baby Life Lynn has now also passed away, two weeks after her mother died, according to The Christian Post.

"It is with great sadness and a absolutely broken heart that I tell you Life Lynn passed away last night. Carrie is now rocking her baby girl. I have no explanation of why this happened, but I do know Jesus loves us and someday we will know why," wrote husband and father Nick DeKlyen on the Facebook page Cure 4 Carrie, which the couple had set up.

Initially, after Life Lynn was born, Nick DeKlyen and the baby’s doctors thought she would be alright, despite her early emergency birth at 24 weeks. "She's going to be fine," Nick had posted at the time. "She's going to be here for 4 or 5 months, but we expect her to be a healthy baby. ... The doctor just said the timing (of the birth) couldn't have been more perfect."

Life Lynn’s health took a turn for the worse, however, and doctors were unable to save her.

Through this unspeakable tragedy of losing his wife, and now his youngest daughter, Nick DeKlyen continues to trust God.

"The Bible says that it rains on the just and the unjust," Nick said. "There are just things you can't explain. I wish I had the answer as to why my wife died and my daughter died. Regardless of what happened, I still chose to follow God and do it his way. When I get to heaven one day, I will ask why. I know he has a reason for everything."