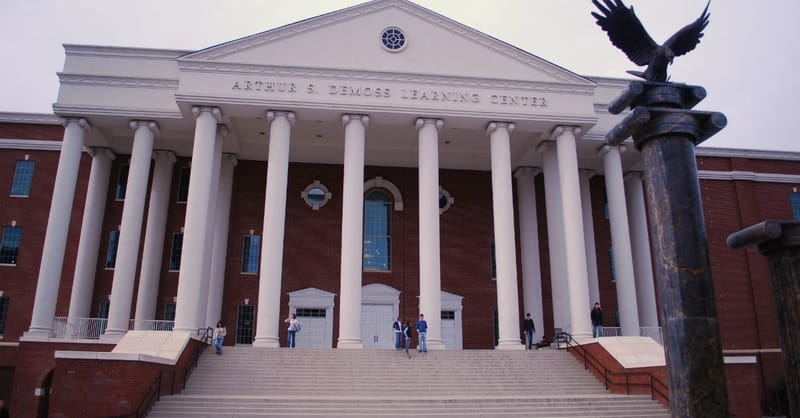 Liberty University has been in the spotlight frequently this election cycle after the University’s chancellor, Jerry Falwell, Jr., endorsed Donald Trump for president.

Even after a 2005 video was released last week in which Trump makes lewd comments about groping women and kissing them without their consent, Falwell and other evangelical leaders maintained their support for the Republican candidate.

But some Liberty students and faculty have had enough.

The student body put together a document titled “Liberty United Against Trump,” in order to push back against Falwell’s endorsement and to clarify what the school stands for. The document has space at the bottom for students to sign their name and provide their email address.

“Donald Trump does not represent our values and we want nothing to do with him,” the document states, also noting that, in Virginia’s primary, Trump received only 90 votes from Liberty students.

“Associating any politician with Christianity is damaging to the Gospel of Jesus Christ. But Donald Trump is not just any politician. He has made his name by maligning others and bragging about his sins. Not only is Donald Trump a bad candidate for president, he is actively promoting the very things that we as Christians ought to oppose,” the document continues.

ChristianHeadlines.com was able to get in touch with some Liberty alumni who signed the document and explained why they felt compelled to do so.

"My time at LU opened my eyes to the pitfalls of legalism, the need to seek out the marginalized, and the life-changing power of the love of God. It was the faculty and students, not Jerry Jr, who shaped my life so profoundly, and in signing this document, that is who I'm proud to stand with,” stated Joy Beth Smith, who is now a contributor to Christianity Today, The Washington Post, and other publications.

Liberty graduate Austin McNair spoke about the need to separate Christianity from a political agenda:

“Evangelical support for Donald Trump is a watershed moment for Christians who have spent the last 25 years fighting the culture wars in the name of what is moral and true...Younger generations are tired of a Christian tradition that is tied so deeply to political advocacy. Now the envelope has been pushed as Evangelical leaders have stood on their heads trying to defend Donald Trump. We see through it. We hate it. We're done with this. If people are wondering why younger generations are rejecting their Christianity, then they can look no further than their pastor who has endorsed Donald Trump for ‘biblical’ reasons.”

Another Liberty alum, Sally Anspach, stated, “Falwell has tied Liberty to Trump, whether he admits it or not. I think signing that petition is important to show the world that the 'the largest evangelical Christian university' does not actually support Trump. Because he’s a poor representation of America and Christianity. I know a lot of people who are voting for Trump simply because they think most other conservatives are going to. Signing that petition may show people like my in-laws and my mother that this is not actually the case, and give them the motivation to vote for someone who aligns with their views and could represent/lead this country with poise.”

“That’s another reason I signed the petition,” she adds, noting that her ties with Liberty could have very real consequences due to Falwell’s endorsement,“because I don’t want to leave Liberty’s name off of my resume in the future, for fear of the assumptions potential employers will make about my intelligence or my morality in future job searches.”

The “Liberty United Against Trump” movement has become national news, and was even covered by secular media sources such as CNN and The Washington Post.

Some, such as Ben Howe at RedState, are even calling for Falwell’s resignation over his endorsement of Trump, given Trump’s inappropriate comments.

But Liberty students say they are primarily concerned with remaining true to their faith and to what the school stands for:

“We are not proclaiming our opposition to Donald Trump out of bitterness, but out of a desire to regain the integrity of our school. While our president Jerry Falwell Jr. tours the country championing the log in his eye, we want the world to know how many students oppose him. We don’t want to champion Donald Trump; we want only to be champions for Christ,” the document concludes.