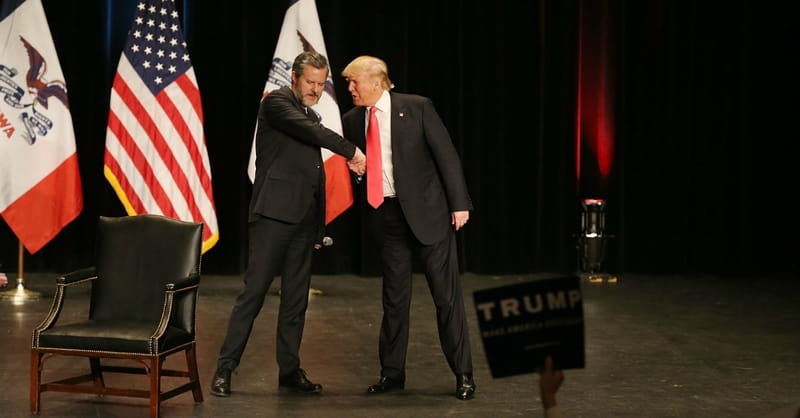 Oklahoma pastor and Christian author Jonathan Martin tweeted last Friday that he was planning on organizing a time of “Praise & peaceful protest” at Liberty.

I feel led to organize a time of praise & peaceful protest at one of the most hostile environments for the gospel in the US: @LibertyU.

“Let’s be clear: Steve Bannon is a brazen white supremacist & the high priest of a false religion. He blasphemes the Holy Spirit,” Martin added.

Martin, who has over 27,000 Twitter followers, was reportedly at Liberty University on Monday evening attending a JOHNNYSWIM concert. He claims he was removed from the concert by Liberty University Police Department officers and told he would be arrested if he set foot on Liberty’s campus again.

In a Facebook post following the incident, Martin wrote, “This was evidently in response to my strong criticism of Jerry Falwell Jr.’s alignment not only with the darkest contours of Trumpism, but expressly with Steve Bannon & the alt-right he represents. I came to the show tonight as a guest of JOHNNYSWIM. I committed no crime (except perhaps to sing too loudly to my favorite JOHNNYSWIM songs) I was openly considering some sort of future action oriented around prayer & repentance, but came this time only for the show & for a time of prayer tomorrow morning to seek divine guidance as to what faithful, humble-but-clear Christian resistance might look like.”

On Tuesday, Jerry Falwell Jr. also issued a Facebook statement, explaining Liberty’s side of the story:

“Liberty University has a longstanding tradition of not allowing uninvited demonstrations or protests on campus. Liberty is a private institution and its campus is private property. Our students expect Liberty to protect them from unwelcome disruptions to their educational experience,” wrote Falwell.

“Liberty University’s leadership believes that good Christians can be Republicans, Democrats, Libertarians, globalists, nationalists and can support whatever political cause they see fit,” Fallwell continued. “Jesus never instructed Christians how to vote when the Pharisees tried to trick him into saying Christians shouldn’t pay taxes. Instead, he said ‘Render unto Caesar the things that are Caesar’s and unto God the things that are God’s.’”

However, he went on, “[I]f Liberty began allowing uninvited groups to protest on campus, the next group might be the KKK, the Nazis, white supremacists or Antifah. We believe we owe it to our students to protect the educational environment that they have invested in. Liberty often invites responsible speakers with viewpoints contrary to those of us in leadership and will continue to do so but Liberty will not allow uninvited protestors [sic] to invade its campus.”