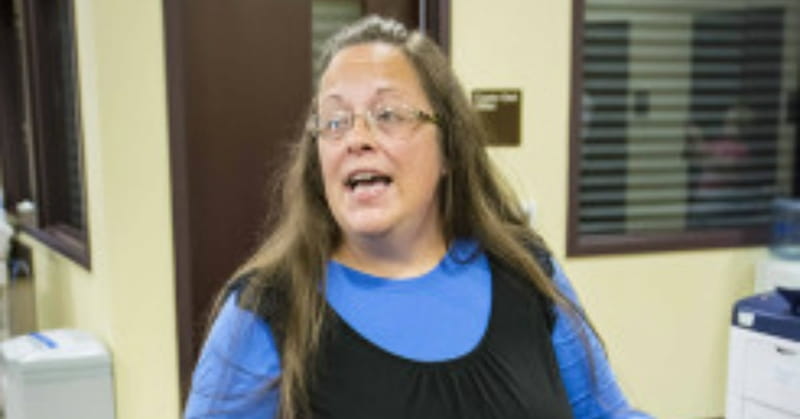 Five of six deputies in the office of a Kentucky county clerk found in contempt of court and held Thursday (Sept. 3)  for her refusal to issue marriage licenses to gay couples say they will process the paperwork starting Friday.

But Rowan County Clerk Kim Davis, whom U.S. District Court Judge David Bunning has placed in the custody of U.S. marshals said through her lawyers she will not authorize any of her employees to issue licenses in her absence.

“My conscience will not allow it,” Davis said earlier to Bunning. “God’s moral law convicts me and conflicts with my duties.”

Among her deputies, the holdout was Davis’ son, Nathan Davis. Yet the other deputy clerks had reservations, some based on religion, as Davis has maintained, others with questions about their legal authority to sign off on forms without the elected official’s consent.

Kim Davis’ lawyers also called into question whether any licenses issued in her absence would be legal.

But Bunning said couples will have to decide whether to take that risk on their own. He indicated that he would lift the contempt charge against the defiant county clerk if deputies began issuing marriage licenses but said he was reluctant to release Kim Davis too quickly because of the possibility that she would stop the process and again try to go through the courts in a sort of ping-pong match.

Allowing Kim Davis, who previously has said she is an Apostolic Christian, to defy a court order could create a ripple effect among other county clerks, Bunning said. Two other clerks in the state also had stopped issuing marriage licenses but have not had lawsuits filed against them.

“Her good-faith belief is simply not a viable defense,” said Bunning, who said he also has deeply held religious beliefs. “Oaths mean things.”

Kim Davis, who was tearful at times in her morning appearance before the judge, testified that she could not obey Bunning’s order because God’s law trumps the court.

As word of Kim Davis’ arrest became known in the crowd that numbered more than 100 protesters outside the courthouse, cheers and chants erupted.

“I’m glad the court sent a strong message that you have to follow the law,” said Timothy Love of Kentucky, one of the plaintiffs in the Supreme Court case that legalized gay marriage.

Those supporting the Rowan County clerk decried the decision, with one man falling on the courthouse steps to pray.

Lawyers inside the courtroom with the Orlando-based Liberty Counsel, which is representing Davis, argued that she met a legal test for protection under federal law because her convictions created a “factual inability” to issue licenses to same-sex couples.

But lawyers for the couples repeatedly pressed the county clerk to admit that her policy is the result of a personal choice.

Bunning agreed and said fines for Davis, who makes $80,000 a year, would not be enough to ensure that she would follow his orders. He also raised concerns that supporters, whom she said are raising money for her, would pay any fine he levied, hampering its force.

Chris Hartman, head of the Fairness Campaign advocacy group, said he thought the judge would levy fines but hoped that jailing Kim Davis would act as a strong deterrent for others who might refuse to follow the law.

Some thought the move could turn her into a martyr among gay-marriage opponents.

Though the clerk was tearful as she testified how she became a Christian in 2011 following the death of her mother-in-law, she appeared straight faced as marshals led her out of the courtroom.

Outside, each side continued to clash.

Ashley Hogue, a secretary from Ashland, held a sign outside the courthouse that read, “Kim Davis does not speak for my religious beliefs.”

“This is so ugly,” she said, wiping away tears. “I was unprepared for all the hate.”

“We don’t hate these people,” he said. “We wouldn’t tell them how to get saved if we hated them.”

Davis has been resisting suggestions that her deputies issue the licenses because her name appears on the certificates. But the crux of the contempt case against her involves Kentucky law, which, unlike some states’ laws, requires county clerks to issue marriage licenses.

When four couples — two gay and two straight — filed suit against her for refusing to issue marriage licenses after the June Supreme Court ruling, she argued that they could be served in other Kentucky counties. Bunning, son of GOP Sen. Jim Bunning who retired from the U.S. Senate in 2011, told her that she or her deputies must issue the licenses but stayed his order until this past Monday as she filed an appeal with the U.S. 6th Circuit Court of Appeals in Cincinnati.

When that stay expired, appeals court judges declined to renew it. And when she asked the Supreme Court to weigh in Monday, justices in Washington refused.

“I hope that everyone will remain civil,” Bunning said. “This country has always had disagreements, but what makes this country different from other countries is that we respect the rule of law.”

Wynn and Kenning report for The Courier-Journal in Louisville, KY. Contributing: The Associated Press

Photo: Rowan County Clerk Kim Davis argues with David Moore and David Ermold, after they were denied a marriage license at the Rowan County Courthouse in Morehead on September 1, 2015.