Iraqi Prime Minister Haydar al-Abadi has formed a committee tasked with monitoring the persecution of Christians, reports Catholic news outlet Agenzia Fides. The committee’s goal is to reign in the violent oppression of Christians in areas like Baghdad, where they are victims of kidnapping, extortion and murder.

A recent increase in persecution has caused a Christian member of the Iraqi parliament and a leader of the Chaldean Patriarchate to call for greater protection of Christians in Iraq. June and July saw four Christians kidnapped in a two-week span. Two of those kidnapped were found dead – even after their ransom was paid. The Patriarchate is assisting the committee with the gathering of information, and has already delivered records of 14 instances of Christian homes and properties that were seized illegally.

One non-governmental organization, Bagdad Beituna (translated, “Baghdad Our Home”), states that “7,000 violations against properties belonging to Iraqi Christians in Baghdad” have occurred since 2003. One official said that nearly 70 percent of the homes in the city have been seized illegally.

According to Henriette Kats, persecution analyst for Open Doors World Watch Research, “This is a positive first step, by which the government acknowledges that something is wrong with the way Christians are being treated in Iraq and that this needs to change. It is the first time that the government is officially investigating this, after decades of discrimination and abuse.

“The establishment of the Islamic State (IS) in June 2014 has brought about a further radicalization of Iraqi society, a development that has been ongoing since the U.S. invasion in 2003. Corruption plays an important role in the persecution of Christians as can be seen in the ransoms demanded and the illegal taking of Christian-owned houses and land mentioned above.

“We see here a combination of the two persecution engines – Islamic extremism and organized corruption – where the vulnerable position of religious minorities, such as Christians, is being exploited. Corruption is deeply rooted in Iraqi society, right up to the highest levels. Also, it is especially people in or close to political power who are occupying not just Christian-owned homes, but also churches and monasteries.

“It will be hard to eradicate this. Acknowledgement and documentation of this phenomenon is a careful first step, which will need to be followed by bold and clear measures.”

Iraq is ranked third on the 2015 Open Doors World Watch List (www.worldwatchlist.us) of the countries where Christians experience the highest levels of persecution.

Want to receive the latest updates from believers around the world? 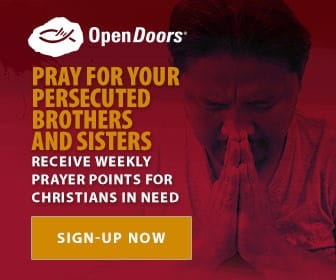