Indonesia Bombings ‘Did Not Come as a Surprise’ 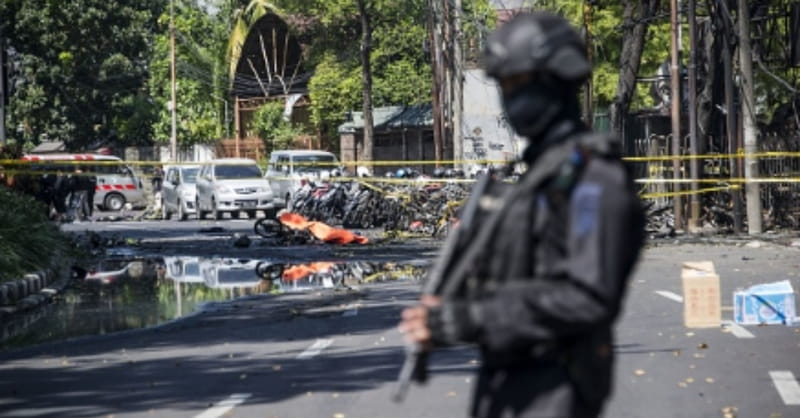 Indonesia Bombings ‘Did Not Come as a Surprise’

As details emerge of the shocking tactics used in the two bomb attacks in Indonesia over the last 48 hours, a regional analyst has said he was not surprised by the apparent Islamist motive.

“Just a few weeks before the attacks, the government published a study, according to which close to 25 per cent of university students agree with the idea of a caliphate. Another study showed that eight per cent are ready for violent jihad, if given the opportunity. So in a way did not come as a surprise,” Thomas Muller, analyst at Christian charity Open Doors International’s World Watch Research unit, said in a radio interview for a Catholic broadcaster yesterday , answering a question about how a country once known for its inter-religious tolerance could give way to extremism.

A 2016 report looking at terrorism in Indonesia found that recruitment to the Islamic State group from the country was “one of the lowest” in the region as a proportion of its 200 million population, which it put down to “a strong culture of moderate Islam, a non-repressive government and relative political stability”. The report, by a group of regional analysts, said the threat from IS-inspired militants “should not be under-estimated”, however, given Indonesia’s long history of Islamic terrorism and lack of legal measures to prosecute individuals under suspicion of terrorism.

Yesterday‘s (13 May) suicide attacks on three churches in Surabaya, the capital city of East Java province, by members of a single family were followed by this morning’s (14 May) suicide attack on a police headquarters by a family of five. Indonesian police have revealed that the family that attacked the three churches on Sunday included two girls, aged nine and 12, two teenage boys, and both of their parents, identified in the New York Times as Dita Oepriarto and his wife, Puji Kuswati.

An eight-year-old girl, wedged between her parents on a motorbike during this morning’s attack on the police headquarters, survived the blast.

Meanwhile police said that an explosion yesterday at a block of flats in Surabaya killed three members of a family who may have been planning an attack.

Latest figures from the BBC put the overall death toll from the three attacks at 18, with more than 40 injured.

Yesterday’s attacks were the most deadly. The two teenaged sons rode motorcycles into Santa Maria Catholic Church and detonated explosives at 07:30��local time, just five minutes before their father drove a bomb-laden car at Surabaya Centre Pentecostal Church, and followed shortly after by their mother and two sisters carrying out a bomb attack on Diponegoro Indonesian Christian Church.

Response to the attacks

Indonesian President Joko Widodo described the attacks as “cowardly, undignified and inhumane” and said he will push through a long-awaited anti-terrorism bill if parliament does not pass it.

President Widodo was one of 70 prominent Muslim scholars meeting at the presidential palace in West Java to discuss peace in Afghanistan just three days ago, on 11 May. The group, from Pakistan, Indonesia and Afghanistan, issued a fatwa saying that “violent extremism and terrorism, including suicide attacks, are against Islamic principles” in an effort aimed at convincing the Taliban to end its violence, reported Associated Press.

Indonesia’s largest Muslim organisation, Nahdlatul Ulama, condemned the attacks. “Every act of hostility that manipulates religion is not supported by Islam,” it said in a statement.

In a statement from the Christian Conference of Asia, its General Secretary Dr. Mathews George Chunakara expressed his condolences to the victims’ families and stated that the attack carried out against worshiping communities during Sunday services is a “heinous crime, which is not justifiable by any religion”. He said the attacks “aim at destroying the country’s long-nurtured and cherished values of religious harmony”.

Pope Francis prayed that those affected would find no place in their hearts for “hatred and violence”, but instead “reconciliation and fraternity”, reported Catholic news site Crux.

The attacks are the worst in Indonesia since Al-Qaeda killed 22 people on the island of Sulawesi in May 2005, and 20 in Bali later that year.

The Islamic State group has claimed responsibility for the Surabaya attacks, which are believed to have been orchestrated by Jemaah Ansharut Daulah (JAD), an Indonesian militant group formed in 2015 and affiliated to IS. JAD is led by the jailed terrorist Aman Abdurrahman, who has been accused of spreading IS propaganda from behind bars. Abdurrahman is currently facing new charges of masterminding attacks including the November 2016 bombing of a church playground that left one child dead.

The Surabaya attacks show more sophistication than previous “amateurish” plots by JAD, Zachary Abuza of the National War College in Washington DC told the BBC. The use of children in the attacks was “absolutely unprecedented” in the region, he said, and speaks to the “ideological indoctrination” of the group.

World Watch Monitor reported in March that an attack on a church on the island of Sumatra was a “political warning” ahead of June’s regional elections. A local source said at the time that “in [Indonesian] politics, targeting Christians is a classic manoeuvre to garner votes and support from Muslims”.

The terrorist attacks came only days after Islamist militant prisoners ended a five-day siege at a high-security jail on the outskirts of the capital Jakarta, reported Reuters. During the stand-off the militants killed five members of Indonesia’s counter-terrorism force, Densus 88. The elite force was set up in 2003 following the 2002 Bali nightclub  bombing that left 202 people dead. Densus 88 was described in 2016 as having “become better than pretty well any other counter-terrorism group in the world” at foiling attacks.

The post Indonesia bombings ‘did not come as a surprise’ appeared first on World Watch Monitor.

Photo: An Indonesian anti-terror policeman stands guard at the blast site following a suicide bomb outside a church in Surabaya on May 13