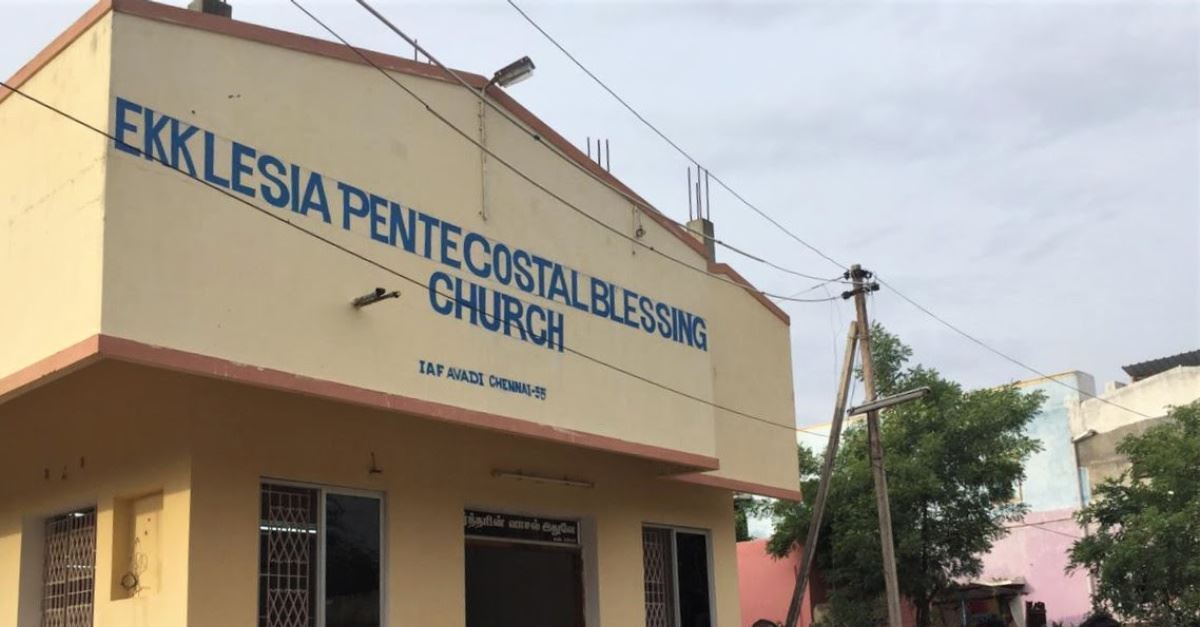 HYDERABAD, India, August 23, 2019 (Morning Star News) – The Hindu nationalists shouting at Christian leaders who were summoned to a police station in southern India asked what gave them the right to lead Christian congregations in a Hindu country.

“Who gave you the permission to run a church in a Hindu country?” they shouted, falsely accusing the three church leaders in Muthapudupet, in the metropolitan area of Chennai, Tamil Nadu, of using foreign funds to convert Hindus, according to the son of one of the pastors, who was also present.

The approximately 200 Hindu nationalists were waiting for Ekklesia Pentecostal Blessing Church’s pastor Sekar, who goes by a single name, pastor Paul Kumaran of Yengaraja Yesuraja Church and church leader Pandari Bai of Grace Home Church after they were summoned to the T8 Muthapudupet police station on July 5.

“They shouted at us and were issuing threats that they will demolish Christian buildings,” Pastor Sekar’s son, Livingston Sekar, told Morning Star News. “They were screaming aggressively, and my father cautioned that we should not have a fight there.”

Leaders of the Hindu nationalist Hindu Makkal Katchi party (Hindu People’s Party) warned them that there should be no Christian worship in the area, Sekar said.

“Pray only with your family, your own brother and sister inside four walls of your house – if any outsider joins you, we will attack you and demolish your buildings,” they said, according to the pastor’s son.

Although the Christian leaders had been summoned based on a complaint of worshipping too loudly, the Hindu nationalists made no mention of that, he noted. The Christians told police that a similar complaint had been filed three years ago, and that they had resolved it by stopping use of loudspeakers, he said.

Police Inspector B. Raja informed the mob that the constitution grants people of various religions the right to worship, and that, “we must respect religious sentiments of fellow Indians,” Sekar said.

The summoned Christians learned at the police station that a key female Hindu nationalist leader acquainted with families in the area had been questioning them about the Christians’ activities, Sekar said.

“She instigated them against Christianity, and then exhorted them to file a police complaint on July 3,” he told Morning Star News.

Higher police officials meeting with church leaders on July 6 assured them that they were aware of Hindu extremist opposition to Christianity, but they gave no indication of investigating and putting an end to it, he said.

“When they understand and abide by the constitution, they should take an initiative to invite the opposing party, hold a discussion, make them understand and put an end to the problem,” Sekar said. “But that might put their position at risk. Peace talks with the Hindu Makkal Katchi is a far-away dream.”

The Christian leaders were summoned to the police station again on July 12, but this time they were accompanied by about 300 local Christians. Officers kept them from entering the station.

Inspector Raja, whose intervention had quelled the Hindu nationalist mob before, had been transferred to another station, they discovered.

“A source at the police station told us that there was a high amount of political pressure on police,” Sekar said. “The police officials told us that revenue department officers would inspect our property and documents and asked us to leave.”

“Saffron flags have been posted in every corner of the city,” Christie said. “They enjoy impunity offered by the state government and the central government and trespass onto churches and Christian houses. The once peaceful and harmonious city has now become highly unsafe for the Christian minority.”

Hindu nationalist propaganda during the campaign leading up to the landslide re-election of Prime Minister Narendra Modi has fueled aggression against Christians, according to Andreas Thonhauser, director of external relations for ADF-International.

The Hindu nationalist movement “seeks to purge India of everything non-Hindu and ultimately to build a Hindu nation with the BJP [Bharatiya Janata Party] as its political arm,” Thonhauser recently wrote in the Catholic Herald. “Needless to say, Christianity fits poorly into this nationalist concept.”

India’s caste system remains a force in everyday life in India even though it is officially abolished, he notes.

Bai, a government health center head nurse who was one of the three Christian leaders summoned to the police station, said that her Hindu neighbors are harassing her for both religious and caste reasons, telling her she has “brought a foreign religion to Tamil land.”

“They said I defiled my caste by having fellowship with Dalits [who have become Christian],” Bai told Morning Star News. “They said, ‘Because of your Christian prayer meetings, Dalits and lower castes who would not dare look eye-to-eye at us are entering our colony, parking their vehicles and enjoying these services at your house.’”

She has tried to talk peacefully with them, giving assurances that there would be no noise disturbance, and even began constructing a small room with soundproof glass windows and walls for their worship meetings, Bai said.

“Now that the construction has started, they are making every effort to stop it,” she said. “Every other day, they call the police.”

India is ranked 10th on Christian support organization Open Doors’ 2019 World Watch List of the countries where it is most difficult to be a Christian. The country was 31st in 2013, but its position has been worse each year since Modi of the BJP came to power in 2014.