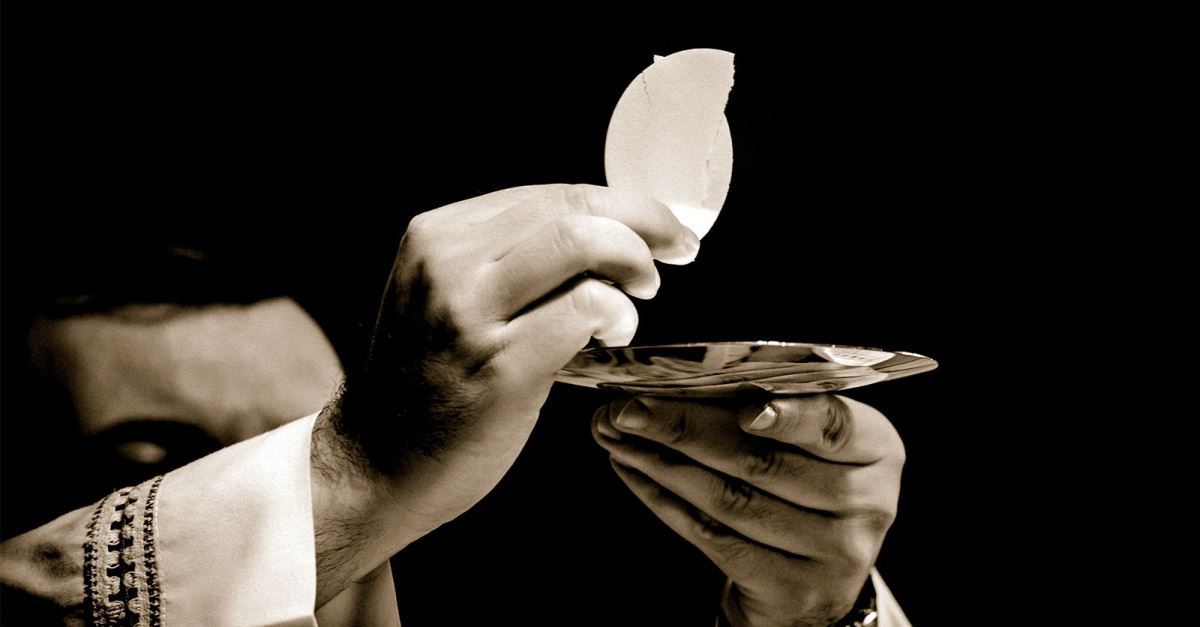 (RNS) — When Catholic bishops threatened to deny Communion to then-presidential candidate John Kerry in 2004 over his abortion stance, the ensuing media frenzy was described as “haunting” the Democrat’s campaign for months.

But this year, when Vice President Joe Biden was denied Communion at a Catholic church in South Carolina for roughly the same reasons, coverage barely lasted a week.

According to experts, the practice — at least as a political statement if not a theological one — may be played out.

“The challenge of Catholics who campaign for policies that violate fundamental Catholic teaching is real, but not new, nor confined to abortion,” John Carr, director of Georgetown University’s Initiative on Catholic Social Thought and Public Life, said in an email. “Refusing communion for public positions was widely discussed and rejected by almost all bishops and pastors years ago.”

Indeed, denying Communion may have lost some of its shock value in today’s political climate, where avoiding Eucharistic rejection has become a normalized part of campaigns for many Catholic politicians. In a world where U.S. Catholics have long accepted ideological divides on abortion — and where many Catholic officials decline to discuss the topic of Communion refusal — the once deeply controversial practice appears to be more theological curiosity than campaign killer.

“Any public figure who advocates for abortion places himself or herself outside of Church teaching,” Morey said in a statement sent to Religion News Service. “As a priest, it is my responsibility to minister to those souls entrusted to my care, and I must do so even in the most difficult situations.”

When Biden was asked about the incident by MSNBC host Andrea Mitchell on Oct. 29, he declined to discuss it.

“That’s just my personal life and I am not going to get into that at all,” Biden said. His campaign also did not respond to requests for comment for this article.

Morey’s actions were the latest iteration of a debate that dates back to at least Kerry’s 2004 White House bid, when then-Archbishop Raymond Burke of St. Louis and others threatened to deny Communion to the then-Massachusetts senator because of his support for abortion rights. The mere possibility caused a media stir: Reporters packed the back pews of churches Kerry visited to take Communion, a trend some referred to as “Wafer Watch” — a reference to wafers used in many Catholic Communion services.

A former advance staffer from the Kerry campaign who asked to remain anonymous told RNS that vetting churches ahead of Kerry’s visits became standard practice at the time. The person said it was often a “delicate process” that involved in-person conversations with local priests.

It’s an open question whether denying Communion was ever popular among American prelates. According to The New York Times, a 2004 survey of Catholic bishops found that of the 154 who responded to the poll, 135 said they did not agree with denying anyone the Eucharist.

Even so, the threat of denying the holy host to politicians persisted. In 2013, Burke — then a cardinal and head of the Apostolic Signatura, the highest court at the Vatican — declared that Rep. Nancy Pelosi, D-California, should be denied Communion because of her abortion stance. And in June of this year, Bishop Thomas John Paprocki of the Diocese of Springfield in Illinois called on local churches to deny Communion to lawmakers who had voted for statutory protection for abortion rights in the state.

Asked if Paprocki would also call on churches to deny Communion to Biden, diocesan spokesman Andrew Hansen said that “if we do learn that (Biden) plans on visiting, we will address the question of Holy Communion at that time.”

Recent years have seen the specter of denying Communion extended to conservatives as well, this time over the issue of immigration, not abortion. In 2018, Bishop Edward Weisenburger of Tucson, Arizona, suggested “canonical penalties” — which would include denying Communion — for Catholics who participated in the Trump administration’s policy of separating immigrant families along the U.S.-Mexico border.

Tricia Bruce, a sociologist of religion at University of Notre Dame’s Center for the Study of Religion and Society, said the back-and-forth over the Eucharist highlights latent political and theological polarization among U.S. Catholics.

Bruce pointed to the slate of opinions that emerged in the days after Biden’s Communion refusal, with Catholics from all corners of the political and theological perspective offering different and often contradictory takes on the issue.

James Salt, a longtime liberal Catholic activist who said that in 2004 he helped organized Catholic theologians to denounce threats of denying Communion, called Morey’s decision “misguided and tragic.” James Martin, a Jesuit priest and consultant for the Vatican’s Dicastery for Communication, expressed frustration with the idea of denying Communion in general.

“Denying Communion to politicians, whether Democrat or Republican, is a bad idea and even worse pastoral practice,” he told RNS.

Bishops also weighed in, with Cardinal Timothy Dolan of the Archdiocese of New York telling Fox News that he wouldn’t judge the decision to deny Communion to Biden but wouldn’t do it himself. Similarly, Biden’s home diocese in Wilmington, Delaware, issued a statement saying that area Bishop W. Francis Malooly “has consistently refrained from politicizing the Eucharist, and will continue to do so.”

Bruce noted the range of opinions matched the divide among lay Catholics on abortion: According to a 2018 Public Religion Research Institute poll, 48% of U.S. Catholics support making abortion legal in most or all cases, compared to 46% who say the opposite.

Bruce said the Communion controversy faces a different abortion debate than it did in 2004. She cited her own forthcoming survey-based research on abortion that included many Catholics, many of whom she said “have a different rank order” when it comes to their moral and political priorities for being a good Catholic.

“The terms of the (abortion) debate that we used before to talk about this issue are not the same terms of the debate that people use now,” she said. “I don’t think it’s this clear line that is faith-based driven by evangelicals and Catholics about whether or not what is inside a woman’s womb is a baby or not.”

She also pointed to generational change among younger Americans — especially millennials and members of Gen Z — who she said showcase “a real distaste” for the “close linkage between religion and politics.”

The presidential campaigns of former U.S. Housing and Urban Development Secretary Julian Castro and former U.S. Rep. John Delaney — both of whom are Catholic and support abortion rights — declined to remark on the matter. So did the Diocese of Charleston, of which Morey’s church is a part; the diocese declined to respond to questions such as whether priests would also deny Communion to someone for participating in the Trump administration’s child separation policy. The U.S. Conference of Catholic Bishops was similarly mum, as were all Catholic dioceses in the early primary state of Nevada.

Representatives from the Diocese of Des Moines, Iowa, and the Diocese of Manchester — which encompasses the state of New Hampshire — noted that their regions do not have a policy on denying Communion. And Cardinal Blase Cupich — a close ally of Pope Francis who heads up the Archdiocese of Chicago — said only that “the long-standing position of the U.S. Conference of Catholic Bishops is that it is the responsibility of the local bishop to exercise his own prudential judgment in deciding how and when to apply Catholic teachings in their dealings with public officials.”

These days, Carr argued, denying Communion plays poorly in the pews, with the press and possibly at the ballot box.

“It is bad Eucharistic theology, bad pastoral practice and bad politics,” he said.