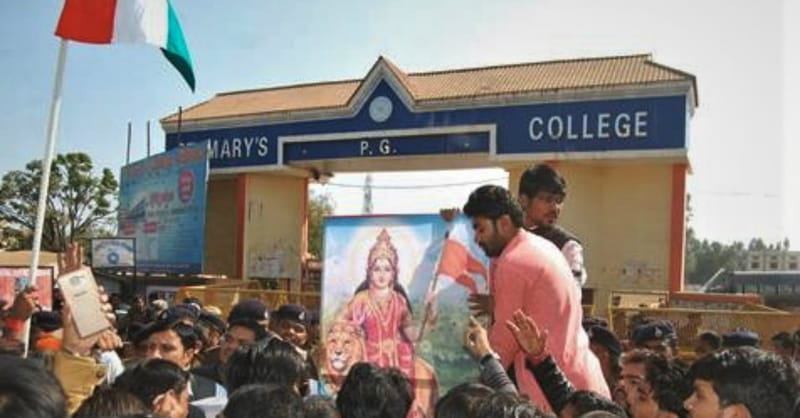 The Rev. Shaju Devassy was quietly attending to his work as director of a Catholic graduate college in central India on Dec. 30 when police showed up and told him a mob of angry Hindu protestors was on its way.

Police in Vidisha, Madhya Pradesh state held the 70-strong mob outside the gate of St. Mary’s Post Graduate College as long as they could, but the protestors managed to jump a boundary wall, and soon they surrounded Devassy at his church presbytery.

Threatening and reviling him, they accused him of being anti-national for refusing to let them worship the Mother India goddess (Aarti of Bharat Mata) at the Catholic institution.

“In menacing tones, they warned him that should he refuse to do the Aarti, they would garland him with the ‘garland of shoes [juthe ki mala],’” Bishop Theodore Mascarenhas, secretary general of the Catholic Bishops’ Conference of India, told Morning Star News.

Another protestor questioned Devassy as to whether he knew Indian culture, the bishop said. “He asked the director, ‘Who is the goddess of education? Why is Saraswati Vandana [worship of goddess Saraswati] not being done in the college?’”

The mob told him that the worship of the Mother India goddess was to be performed as a sign of patriotism, the bishop said.

“As Indians, the activists claimed that they did not require permission from anyone and would perform it anywhere without anybody’s permission,” Mascarenhas said. “The leaders of the mob made it clear that many more would come again to the college campus on Jan. 4 and would not only perform Aarti but would force the director, Father Shaju, to do the same. Having imparted this ominous warning, the mob left the compound.”

As might be expected at an institution for which worship of anything but the Holy Trinity is idolatrous, the  posters and the worship of the Mother India goddess are against school regulations.

This incident and the two large-scale, attempted attacks that followed came about after members of the Hindu nationalist Bharatiya Janata Party’s student union wing, the Akhil Bharatiya Vidyarthi Parishad (All Indian Student Council, or ABVP), captured all the posts on the student council last November, the bishop said. The ABVP is affiliated with the Hindu extremist Rashtriya Swayamsevak Sangh (RSS).

Devassy pointed out that this was done without permission and was against university regulations, and he gently requested they take the two posters down, Mascarenhas said. The students promised to remove the posters within three days, but when they failed to do so, the college administration had them removed.

On Dec. 29 Devassy received a phone call informing him that the ABVP members were running a Facebook campaign under the tag “Bharat Mata Ki Aarti” (Worship of Mother India goddess) describing college officials as anti-national.

“In the social media campaign, hatred was being promoted against the college with regard to Bharat Mata ki Aarti, describing the college authorities as anti-national,” Bishop Mascarenhas said. “The demand was that the Aarti of Bharat Mata be allowed in the college as an expression of nationalism.”

After the mob verbally attacked him the next day, Devassy reported it to the college chairman, diocese authorities and the Madhya Pradesh Regional Bishops’ Council. With their suggestions, he drafted a letter about the incident, and he and other representatives met with the Inspector General (IG) of Law and Order and other security officials in Bhopal and submitted a memorandum to them.

On Jan. 4, more than 800 protestors gathered at the gate of the college and began to pressure police stationed there, trying to break through the barricades and enter the campus.

More than 300 officers were deployed at three Catholic institutions on the campus – the college, St. Mary’s Senior Secondary School and Senior Secondary Trinity Convent School, Vidisha. The protestors shouted slogans, threw stones and broke the barricades before performing the worship of the Mother India goddess in a temple opposite the college gate on a national highway, sources said.

At the same time, another group broke a side boundary wall onto the college campus, and police rushed to the area and stopped them from entering. Officers reportedly were forced to resort to baton charges and tear gas. At least three policemen were reported injured.

Tensions remained high for two hours at the main gate, and the mob slowly moved away after about 2:30 p.m. Police security remained till late at night.

“A copy of the letter issued by the SDM [Sub-Divisional Magistrate] to the college council secretary denying the permission to perform the Aarti was also received by the college management on Jan. 4, thus confirming that Fr. Shaju’s decision in refusing permission to do the Aarti on the 30th of December was correct,” Mascarenhas said.

After Hindu nationalists, including members of the Vishwa Sanatan Sangh, issued more threats of a massive attack, however, the protestors returned on Jan. 16 with an even larger crowd.

When the threats grew a few days beforehand, Mascarenhas immediately got in touch with Union Home Minister Rajnath Singh and appraised him of the highly volatile situation. The Madhya Pradesh Catholic Diocesan School’s Association filed a writ petition at the Jabalpur High Court seeking protection for their institutes in Vidisha.

With the federal home minister’s intervention and the state government’s action with the high court, the Madhya Pradesh government provided heavy security. A huge police force was deployed in and around the college, and several Hindu nationalist leaders were arrested as a precautionary measure on Jan. 15-16.

The Additional Attorney General of Madhya Pradesh on Jan. 15 gave assurance at the Jabalpur High Court that complete protection would be given to the college against the threatened Jan. 16 attack.

“It must be said that they kept their word,” Mascarenhas told Morning Star News. “More than 500 fully equipped police personnel were deployed for the protection of the college.”

The Superintendent of Police reportedly said 30 Hindu nationalists, including Updesh Rana, leader of Vishwa Sanatan Sangh, were arrested as they were heading for the college to perform the Hindu worship.

“With no leaders to coordinate, the action fizzled out and the situation went on peacefully,” said Mascarenhas, who was also grateful to the Union Home Minister and the Madhya Pradesh administration for intervening.

The security was a rare instance of federal and state help in a country increasingly marked by local officials colluding with Hindu extremists to persecute Christians. The 1,800-student college, where most students are Hindus, falls in the Assembly constituency of Vidisha, which was once represented by Chief Minister Shivraj Singh Chauhan. The Parliamentary representative is the current Union Minister of External Affairs, Sushma Swaraj. Thus Vidisha is considered a place of political significance, with events there deemed to have serious state and national level significance.

“I think the college has sent a signal to the whole of India that with the good will of the government and our political leaders, this country can maintain its tradition of peace and harmony and protect and strengthen its secular fabric,” Mascarenhas said.

The government intervention came in striking contrast to the hostile tone of the National Democratic Alliance government, led by the Hindu nationalist BJP, against non-Hindus, which has emboldened Hindu extremists in several parts of the country to attack Christians since Prime Minister Narendra Modi took power in May 2014, religious rights advocates say.

India ranked 11th on Christian support organization Open Doors’ 2018 World Watch List of countries where Christians experience the most persecution, up from 15th the previous year, and ahead of Saudi Arabia, Nigeria and Egypt.